The Atlantic: Donald Trump’s Conflicts of Interest: A Crib Sheet 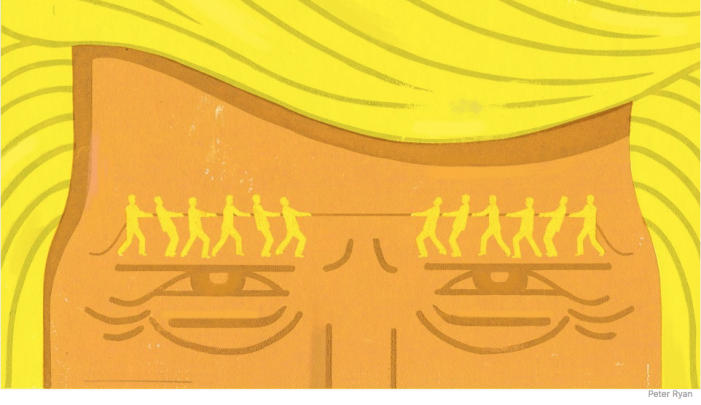 JEREMY VENOOK APR 24, 2017 President Donald Trump still has not taken the necessary steps to distance himself from his businesses while in office. In accordance with a plan that he and one of his lawyers, Sheri Dillon, laid out at a press conference on January 11, Trump has filed paperwork to remove himself from the day-to-day operation of […] 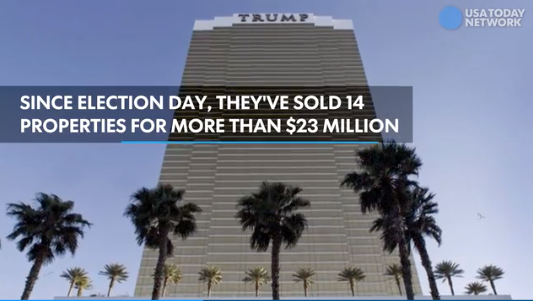 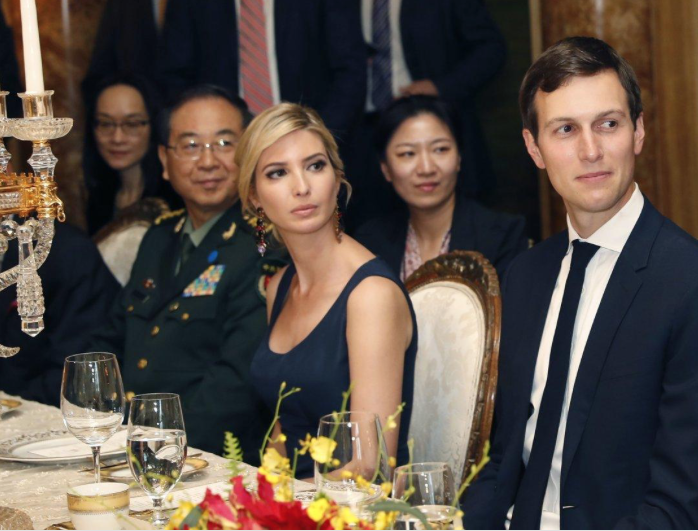 By JASON SILVERSTEIN  Tuesday, April 18, 2017 The Chinese government reportedly granted Ivanka Trump’s company new trademarks the same day this month she and her husband Jared Kushner met with the president of China. CLICK IMAGE ABOVE for direct link to story. Ivanka Trump and Kushner dined with Chinese President Xi Jinping and his wife at Mar-a-Lago […] 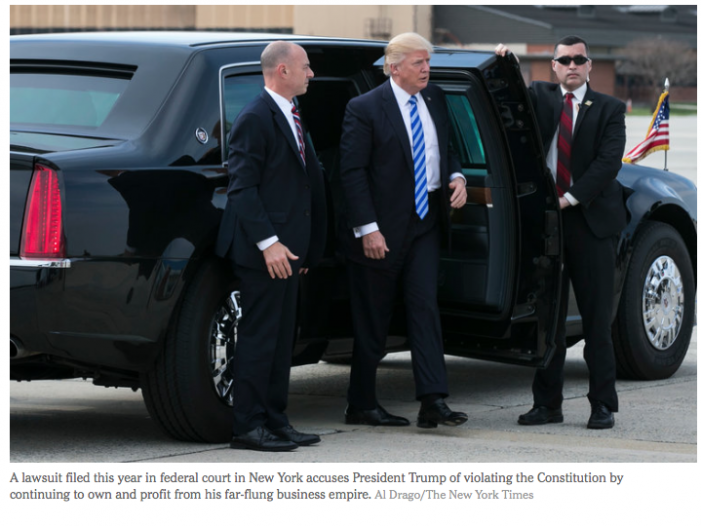 By SHARON LaFRANIERE APRIL 18, 2017 WASHINGTON — A legal watchdog group is expanding a federal lawsuit filed earlier this year against President Trump, accusing him of violating the Constitution by continuing to own and profit from his far-flung business empire. CLICK IMAGE for direct link to NYT story The amended complaint, to be filed on Tuesday […] 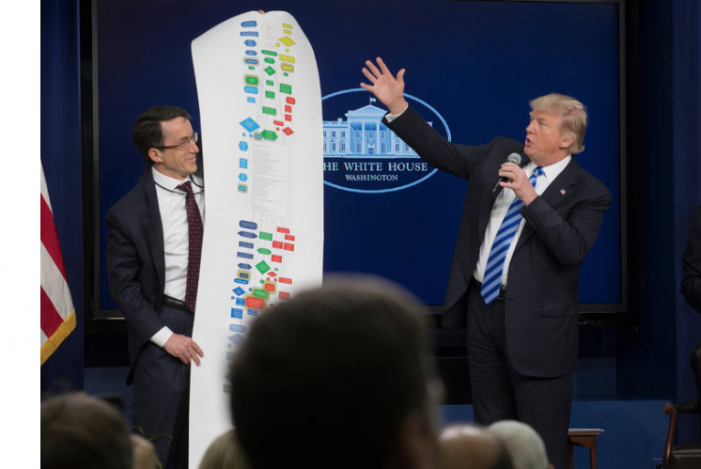 By ERIC LIPTON, BEN PROTESS and ANDREW W. LEHREN APRIL 15, 2017 WASHINGTON — President Trump is populating the White House and federal agencies with former lobbyists, lawyers and consultants who in many cases are helping to craft new policies for the same industries in which they recently earned a paycheck. CLICK IMAGE ABOVE for direct link to NYT story. […] 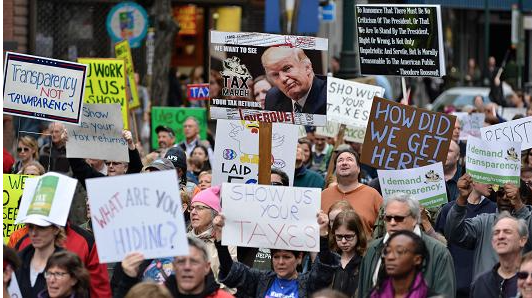 Doug Stanglin and Heidi M Przybyla  April 15, 2017  Hundreds of protesters streamed onto the Capitol lawn Saturday carrying signs demanding that President Trump release his tax returns in one of more than 150 Tax Day rallies and marches planned nationwide. CLICK IMAGE ABOVE for direct link to story. Protesters in the nation’s capital came […] 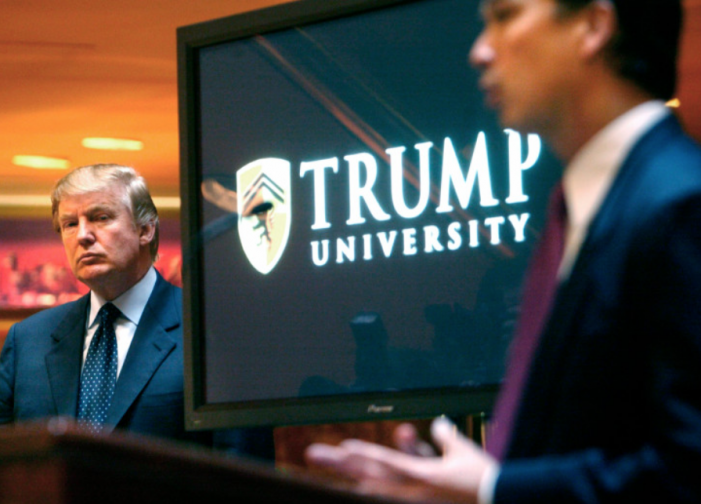 By MICHAEL BIESECKER and GARY FINEOUT  April 12, 2017 at 6:05 am WASHINGTON — As a top aide to Florida’s attorney general, Carlos G. Muniz helped defend the office’s decision to sit out legal action against Trump University. Now the president is naming him to be the top lawyer in the U.S. Education Department. CLICK IMAGE ABOVE for direct […] 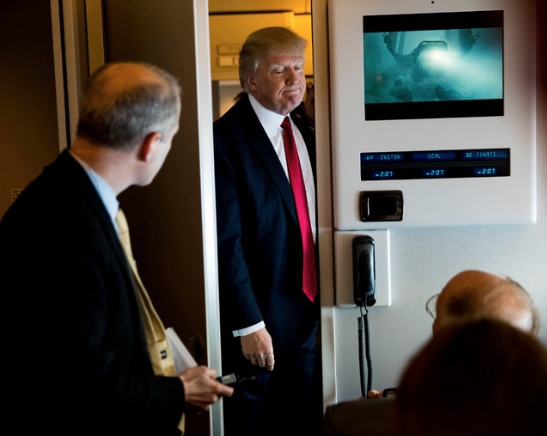 By ALAN RAPPEPORT APRIL 7, 2017 WASHINGTON — When Donald J. Trump was crafting his campaign tax plan last year, one of his top economic advisers proposed an idea that would have made it harder for real estate moguls to use mountains of debt to make deals. Mr. Trump, who made his fortune as a property developer and earned the nickname […]

By Peter Lance on April 6, 2017   45: THE BEST REPORTING, Conflicts of Interest, THE RUSSIA-TRUMP CONNECTION 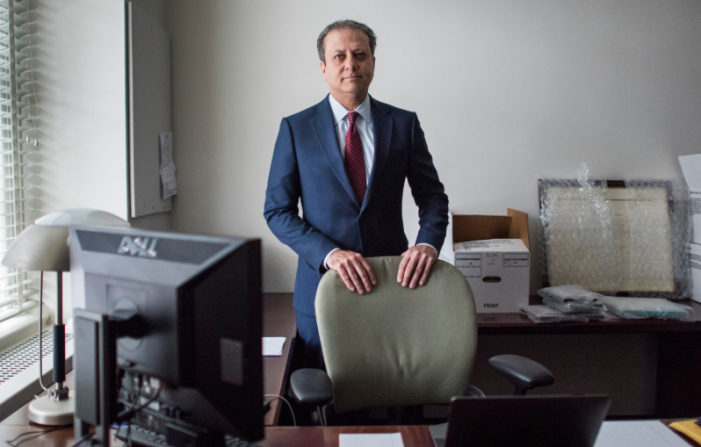 By BENJAMIN WEISER and WILLIAM K. RASHBAUM APRIL 6, 2017 Nearly a month after he was fired by the Trump administration, Preet Bharara, the former United States attorney in Manhattan, remains mystified by the circumstances of his ouster, saying he had never been told why President Trump changed his mind about wanting him to stay on. CLICK IMAGE ABOVE for […]

By Tim Talley Associated Press. March 30th, 2017 OKLAHOMA CITY (AP) — The Oklahoma Bar Association has opened an investigation into an ethics complaint against former state Attorney General Scott Pruitt, now administrator of the Environmental Protection Agency, according to a letter from the association’s general counsel. CLICK IMAGE ABOVE FOR DIRECT LINK TO STORY: […]