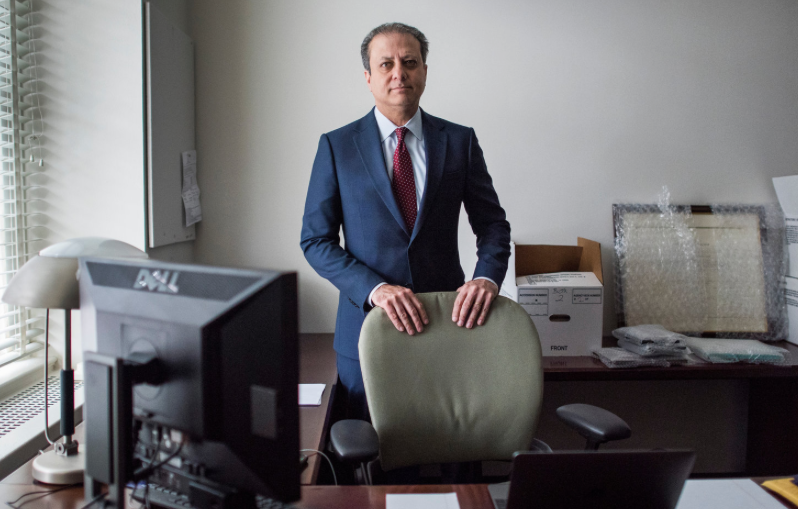 Nearly a month after he was fired by the Trump administration, Preet Bharara, the former United States attorney in Manhattan, remains mystified by the circumstances of his ouster, saying he had never been told why President Trump changed his mind about wanting him to stay on.

In his first interview since he was forced out, Mr. Bharara said this week that his firing was part and parcel of what he characterized as the chaos that has defined some of the administration’s decisions.

He called it “a direct example of the kind of uncertain helter-skelter incompetence, when it comes to personnel decisions and executive actions, that was in people’s minds when this out-of-the-blue call for everyone’s resignation letter came.”

Mr. Bharara also disclosed that Mr. Trump, after having asked him to remain in his post, telephoned him three times, raising concern among Mr. Bharara and his aides that such calls could run afoul of strict Justice Department protocols governing communications with the White House.

Mr. Bharara, an appointee of President Barack Obama, was among 46 United States attorneys who were asked on March 10 to submit their resignations. The directive was not especially unusual; all presidents choose their own candidates for United States attorney positions, and invariably ask holdover prosecutors to leave.

But Mr. Bharara’s inclusion in the request came as a surprise, since he had been asked on Nov. 30 by Mr. Trump, the president-elect at the time, to remain in his post.

Speculating about the reasons for Mr. Bharara’s firing became a kind of parlor game for a time in some legal circles, with questions about whether the president may have been trying to block investigations focused on his friends and associates. Those inquiries include one into the way Fox News handled payments related to sexual harassment accusations under Roger Ailes, its former chairman, and another focused on stock trades by Tom Price, Mr. Trump’s secretary of health and human services.

A Justice Department spokesman declined to comment on why Mr. Bharara was among those dismissed despite Mr. Trump’s earlier request that he stay.

In his seven years as the United States attorney for the Southern District of New York, Mr. Bharara established a reputation for prosecuting public corruption cases and for investigating insider trading. He declined to discuss the office’s current investigations, but he said he did not know whether his firing was related to any particular case. Still, he expressed some disbelief over how his removal was handled.

“Literally, no one was giving us an answer to that question,” Mr. Bharara said.

Mr. Bharara spoke to The New York Times on Monday, his first day as a distinguished scholar in residence at New York University School of Law. On Thursday night, he is to deliver a lecture at The Cooper Union in Manhattan.

He said he was uncertain about his plans, but reiterated that he had no interest in seeking public office. He has had some time to contemplate life after being a prosecutor; in the interview, he said he initially expected that, like all United States attorneys, he would be asked to resign once Mr. Trump took office, a request that he said would have been “perfectly appropriate.”

His expectations began to change on Nov. 16, when he said he received a call from Senator Chuck Schumer, Democrat of New York, for whom he had once worked as chief counsel and who had recommended him to Mr. Obama for the United States attorney post.

Mr. Schumer told Mr. Bharara he had gotten a call from Mr. Trump during which the president-elect said he wanted Mr. Bharara to stay on. That led to a meeting on Nov. 30, on the 26th floor at Trump Tower. Jared Kushner, Mr. Trump’s son-in-law, and Stephen K. Bannon, his chief strategist, were waiting, Mr. Bharara said.

When Mr. Trump entered the room 10 to 15 minutes later, Mr. Bharara recalled, he quipped, “This guy gets better press than me.” Mr. Trump said he had read for years about the office’s work under Mr. Bharara, and praised its accomplishments.

Mr. Bharara said he spoke briefly about his office, emphasizing that it prized its independence, and that he presumed that was why Mr. Trump wanted him to stay. He would be honored, he said he told Mr. Trump, to continue in the job.

At the meeting, Mr. Bharara said, Mr. Trump asked for his phone numbers, a request that Mr. Bharara found unusual. He nonetheless scribbled them down on a yellow sticky note, which he left on Mr. Trump’s desk.

As the meeting ended, Mr. Bharara said that Mr. Trump told him to tell reporters in the lobby about the decision.

Mr. Bharara said he had gone over what he planned to say in the lobby with Mr. Kushner and Mr. Bannon, and that both had given their assent. Mr. Bharara said Mr. Bannon had also asked that he call Jeff Sessions, at the time a Republican senator from Alabama whom Mr. Trump had picked as his nominee for attorney general.

Standing at the elevator bank before going downstairs, Mr. Bharara said he had called Mr. Sessions and had an “equally positive and enthusiastic” conversation.

Soon, Mr. Bharara was downstairs addressing reporters, telling them that Mr. Trump had asked him to stay on and that he had agreed to do so.

About two weeks later, Mr. Bharara said he received a message that Mr. Trump had called.

Mr. Bharara said he consulted with senior aides, including his deputy, Joon H. Kim, and that they had concluded there was no ethical problem with returning the call because Mr. Trump was not yet president. “The consensus was that I can return the call,” he said, “and just to be certain that we don’t talk about any case.”

During the brief conversation, Mr. Trump raised no problematic topics and said he was just “checking in,” Mr. Bharara recalled. The president-elect asked if he had spoken with Mr. Sessions, and Mr. Bharara said he had. Mr. Trump seemed pleased.

Afterward, Mr. Bharara said he called Brian Benczkowski, who led the Justice Department transition team, to inform him of the call.

On Jan. 18, two days before Mr. Trump’s inauguration, Mr. Bharara learned that he had called again. Mr. Bharara said he spoke to his senior aides and later advised Mr. Benczkowski.

This conversation was also brief and innocuous, Mr. Bharara said, adding that Mr. Trump mentioned that he was working on his inaugural address and that his theme would be unity.

The timing of a third call, on March 9, might suggest that Mr. Trump was reaching out to Mr. Bharara before the request for the mass resignations became public. But the actual purpose of the call was unclear; Mr. Bharara did not return it.

He said he had consulted with Mr. Kim again and that they had reviewed two memos, issued by the Justice Department in 2007 and 2009, related to communications with the White House.

He concluded that prudence as well as the written policy counseled against his speaking directly to the president.

“I do not think it is wise for a sitting president to try cultivating a personal telephonic relationship with a sitting U.S. attorney, especially one with a certain jurisdiction,” he said, an apparent reference to Trump Tower’s location within the Southern District.

That evening, Mr. Bharara said, he spoke with Mr. Sessions’s chief of staff, Jody Hunt, and suggested that Mr. Sessions might want to counsel the president about contacting a sitting United States attorney directly.

Mr. Bharara said he had seen firsthand what could happen when the Justice Department became politicized. As a Senate staff member, he had helped to lead the Senate Judiciary Committee’s investigation into the firings of up to nine United States attorneys around the country during President George W. Bush’s administration.

Moreover, Mr. Bharara said that taking the president’s call could potentially have opened them both to the kind of criticism that Mr. Trump raised during the presidential campaign after President Bill Clinton met Attorney General Loretta Lynch on an airport tarmac in Phoenix while the F.B.I. was investigating his Democratic opponent, Hillary Clinton.

“I mean, either way,” Mr. Bharara said, sketching out a broad hypothetical, “people would say: ‘All we know is the president called Preet. Preet only has his job because the president bizarrely asked him to stay. And you know what? Preet didn’t charge that guy. Preet didn’t open that investigation. They must have made a deal.’”

The next day, the phone calls went out from the acting deputy attorney general, Dana J. Boente, informing Mr. Bharara and the other prosecutors to tender their resignations immediately.

Mr. Bharara said he spent the rest of the day trying to determine whether the request applied to him.

Mr. Boente called again the next morning, and said he understood that Mr. Bharara was not submitting a letter of resignation. Mr. Bharara confirmed that report.

Mr. Boente soon called back, and Mr. Bharara remembered asking, “‘I want to know: Is the president firing me?’ That’s all. It seems like a very easy question.”