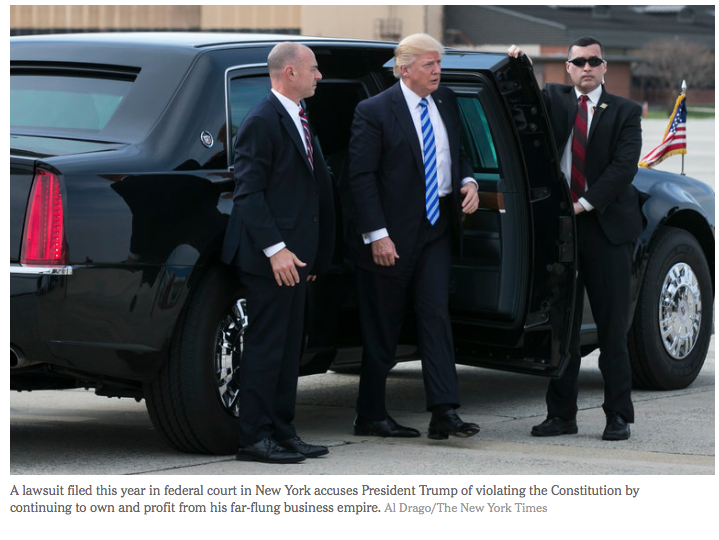 WASHINGTON — A legal watchdog group is expanding a federal lawsuit filed earlier this year against President Trump, accusing him of violating the Constitution by continuing to own and profit from his far-flung business empire.

The amended complaint, to be filed on Tuesday in a federal court in the Southern District of New York, alleges that Mr. Trump has harmed an organization that represents more than 200 restaurants and nearly 25,000 employees. Its clients compete directly with restaurants that Mr. Trump owns or in which he has a financial interest, the new pleading alleges, and suffer from the revenue he reaps from his enterprises.

The revised complaint by Citizens for Responsibility and Ethics in Washington, or CREW, is an effort to address what some saw as a critical weakness in the group’s original lawsuit: the lack of a clear victim who could claim injuries resulting from Mr. Trump’s failure either to sell off his business holdings or to place them in a blind trust.

It will be filed just days before the Justice Department is expected to respond to the lawsuit. Besides the restaurant organization, the complaint alleges that Mr. Trump’s actions have harmed a woman who books embassy and political functions in Washington.

CREW’s initial complaint argued that the Constitution prohibits the president from accepting any economic benefit from foreign governments. The expanded lawsuit contends that Mr. Trump also cannot legally accept any financial benefit, besides his salary, from the United States government.

By failing to sufficiently distance himself from his companies, CREW has charged, Mr. Trump has violated clauses of the Constitution that ban the acceptance of any government-bestowed benefits, or “emoluments,” either at home or abroad. Among those benefits, the organization contends, was China’s decision this year to grant preliminary approval of 38 trademarks protecting Mr. Trump’s name.

Justice Department lawyers, who have been working for weeks on their answer to the lawsuit, plan to counter that the framers of the Constitution meant only to rule out gifts and compensation for services. The Justice Department is expected to argue that ordinary arm’s length transactions for services, like the payment of a restaurant bill at a hotel, are not prohibited.

They will also contend that only Congress can intervene if a president violates either the domestic or foreign emoluments clause of the Constitution. Under the separation of powers doctrine, they argue, courts are powerless to act.

One of CREW’s new plaintiffs is Jill Phaneuf, who books events for the Carlyle Hotel and the Glover Park Hotel in Washington. How much she is paid depends on how many events she books, according to the revised complaint. She competes for clients, it alleges, with hotels in which the president maintains a financial interest.

The other new plaintiff, Restaurant Opportunities Centers United Inc., represents restaurants and employees who claim they also suffer from the loss of business, wages and tips because of benefits to Mr. Trump’s enterprises. Among them, the complaint alleges, is the preliminary approval of a $32 million tax credit to the Trump International Hotel in downtown Washington. That would offset about one-fifth of the cost of rehabilitating the building, the complaint alleges.

In a statement, Saru Jayaraman, co-founder and co-director of the restaurant organization, said: “The Trump administration’s conflicts of interest do direct harm to R.O.C. United and to the millions of Americans — workers, employers and allied consumers — our organization represents. We need a president who puts the success and security of the American people ahead of his own financial interests and those of his fellow elites.”