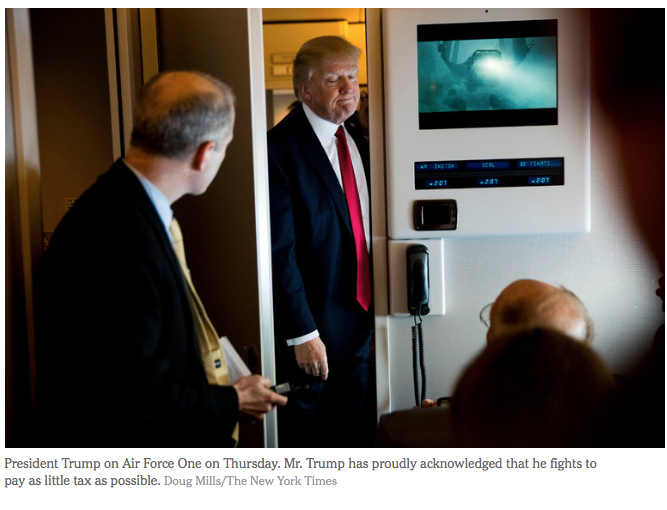 WASHINGTON — When Donald J. Trump was crafting his campaign tax plan last year, one of his top economic advisers proposed an idea that would have made it harder for real estate moguls to use mountains of debt to make deals. Mr. Trump, who made his fortune as a property developer and earned the nickname “the king of debt,” scoffed at the suggestion.

“He hated that idea,” said Stephen Moore, the Heritage Foundation economist who counseled Mr. Trump during the campaign.

The proposal to scale back interest deductions for companies did not make the cut.

As President Trump focuses his attention on overhauling America’s tax code, he has considered turning to the other side of the aisle to reach a bipartisan deal. But an obstacle has already surfaced, dimming the chances that a “grand bargain” will be achieved: Democrats are sounding the alarm that reshaping the tax code presents Mr. Trump’s biggest conflict of interest yet.

A tax code overhaul gives Democrats the chance to again bring up Mr. Trump’s refusal to release his tax returns and to press for details of how his business deals are financed. That focus could also affect which tax code items, such as interest deductibility, are included in the overhaul.

“The American people want to see what this is about,” Senator Ron Wyden, the ranking Democrat on the Senate Finance Committee, said of Mr. Trump’s presiding over tax code changes. “Are our interests being protected or are these deals that somehow promote his interests?”

Representative Hakeem Jeffries, a New York Democrat, said this week that tax code changes should be delayed until members of Congress can review Mr. Trump’s tax returns to see how an overhaul of the tax code might benefit him. And last week Terri A. Sewell, an Alabama Democrat on the Ways and Means Committee, declared at a hearing that it was “imperative to know how such tax reform affects the president.”

Mr. Trump, as president, is legally exempt from the kinds of financial conflicts of interest that other government officials are required to avoid. But that has not stopped questions from swirling beyond Democrats about how he and his family could profit from the presidency.

“If the tax reform proposals start to have discussions of whether or not to drop certain deductions for the real estate business, or to expand those, that now becomes the entire matter of tax reform,” said Richard Painter, who was President George W. Bush’s ethics lawyer.

Referring to Mr. Trump, Mr. Painter added: “He cannot be an honest arbiter.”

Mr. Trump has proudly acknowledged that he fights to pay as little tax as possible so that the federal government cannot waste his money. While Mr. Trump’s advisers have said he would not release his tax documents, the financial disclosures and the portions of returns that have been revealed offer hints of his creative use of the tax code that will likely come up as debates over tax code changes intensify.

A loss of nearly $1 billion that Mr. Trump booked in 1995, for instance, could have allowed him to avoid paying federal income tax for nearly two decades thanks to a rule that allows net operating losses to be carried forward into future years. Mr. Trump’s campaign tax plan did not call for changes to that provision.

Tax provisions that have proved costly to Mr. Trump could be on the table. Last month, a portion of Mr. Trump’s 2005 tax return showed that he paid $31 million as a result of the alternative minimum tax that year. Mr. Trump has called for the elimination of that tax rule.

The opportunity to use Mr. Trump as a weapon against a tax overhaul could distort the debate in other ways. After the fight over the “border adjustment” tax, the most contentious topic is the deductibility of net interest expenses, the idea Mr. Moore had unsuccessfully proposed to Mr. Trump.

House Republicans, led by Speaker Paul D. Ryan, want to end the practice of allowing businesses to lower their tax bills by deducting interest from their incomes. Instead, companies would be able to immediately write off the costs of equipment expenses. This would generate more than $1 trillion in revenue — roughly the same amount as the border adjustment tax — according to an analysis by the Tax Foundation, a nonpartisan tax research group.

“It’s been surprisingly less controversial so far than one would expect considering it’s a $1 trillion tax increase,” said Alan Cole, an economist at the foundation.

That is quickly changing. New coalitions are forming to fight back against ending interest deductibility. Some Republicans from rural districts have expressed concern at congressional hearings this week about how scrapping interest deductibility would harm farmers who rely heavily on debt financing. Private equity and real estate lobbyists have also been aggressively mobilizing to resist the potential change.

“This is the next large fight,” said James Maloney, vice president for public affairs at the American Investment Council, which lobbies for the private equity industry and considers the treatment of interest as its most pressing issue.

So far Mr. Trump has avoided weighing in publicly on the finer details of the tax overhaul, but industries that could be affected by changes to the tax code hope to reap the benefits of having financial interests aligned with those of the president.

Matthew Berger, vice president for tax at the National Multifamily Housing Council, an apartment industry group, warned that the tax outline being promoted by House Republicans could cause the tax burdens of real estate developers to spike, potentially dampening growth of new housing projects.

But Mr. Berger said he was optimistic that Mr. Trump would not let that happen. “I would hope that his expertise in real estate would make him sensitive to the issues that developers consider,” Mr. Berger said.