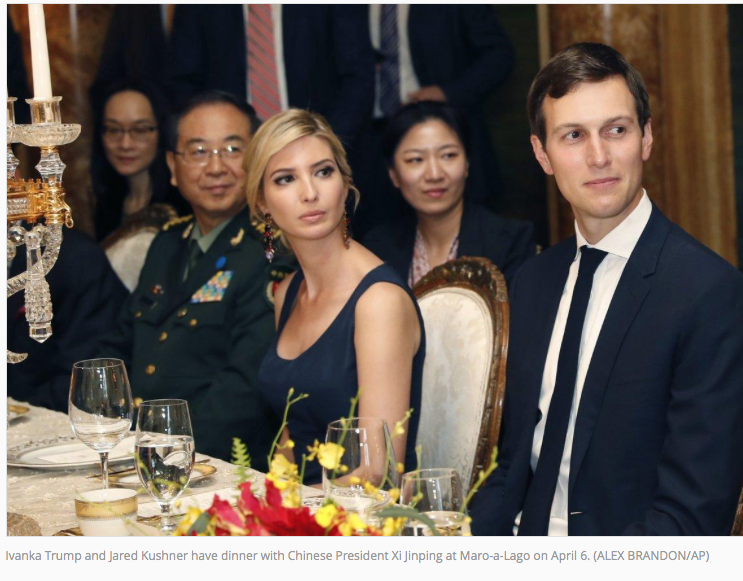 The Chinese government reportedly granted Ivanka Trump’s company new trademarks the same day this month she and her husband Jared Kushner met with the president of China.

Ivanka Trump and Kushner dined with Chinese President Xi Jinping and his wife at Mar-a-Lago April 6 within hours of China approving three new trademarks for her, the Associated Press reported Tuesday.

Ivanka’s business has been burgeoning since her businessman father stormed into the White House. It hit record sales this year, and last year its U.S. imports — most of which come from China — jumped 166%, according to data from the trade tracking firm Panjiva.

Trump has stepped down from her company, and shifted the brand’s assets to a family-run trust valued at more than $50 million and pledged to recuse herself from issues that present conflicts.

“Ivanka will not weigh in on business strategy, marketing issues, or the commercial terms of agreements,” her attorney, Jamie Gorelick, said in a statement.

The White House did not comment on the trademark approval.

The Trump administration has not shied about giving the First Daughter’s business a boost.

President Trump complained on Twitter in February that Nordstrom was treating Ivanka “unfairly” after pulling her products because of poor sales at the clothing chain.

White House adviser Kellyanne Conway then urged in an interview for the public to “go buy Ivanka’s stuff.” She even admitted she was giving the President’s daughter “a free commercial.”

“Go buy it today, everybody. You can find it online,” Conway said.

Government ethics watchdogs scolded the plugs and the White House said it “counseled” Conway for her comments, but serious consequences never appeared to emerge.

Meanwhile, President Trump has seen dozens of brands in his name approved in China and Mexico — two countries he targeted on the campaign trade as economic adversaries of the United States. The China approvals, in particular, came much faster than the usual pace of the country’s Trademark Office.

Trump’s family remains in control of his sprawling business empire, even as he sits in the Oval Office.

Ethics experts have repeatedly pointed out that this runs the risk of violating the emoluments clause, a provision in the Constitution preventing the President from accepting gifts from foreign leaders.