Trump reverses pledge to mandate U.S. steel for Keystone Pipeline. A direct beneficiary is a Russian oligarch with close ties to Vladimir Putin

By Peter Lance investigatingtrump.com & The Huffington Post. March 5th, 2017. After green lighting the continuation of the controversial Keystone XL oil pipeline in an executive order January 24th, President Trump declared as recently as last week that the pipeline had to use American made steel “or we’re not building one.” 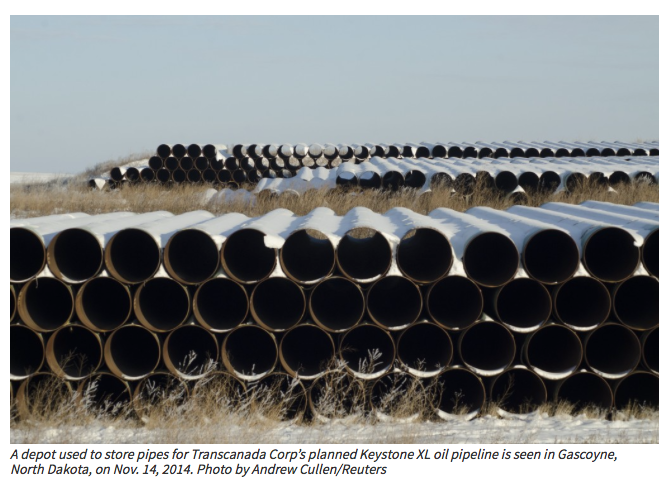 But on Friday, Trump spokeswoman Sarah Huckabee Sanders announced that the directive would apply only to new pipelines or those currently undergoing repair.

That sharp reversal now paves the way for the use of a stockpile of steel manufactured in Canada by a subsidiary of Evraz, a company in which Russian billionaire Roman Abramovich owns nearly a one/third stake.

Abramovich, estimated to be worth $8.9 billion, who ranks No. 151 on Forbes list of the 500 wealthiest people in the world, has longstanding personal and political ties to Russian President Vladimir Putin, whom President Trump has repeatedly praised.

The connection between the oligarch and the steel already produced for the pipeline was first reported by Desmogblog.com, a Canadian website TIME Magazine named to its list of “25 best blogs of 2011.”  According to the report: 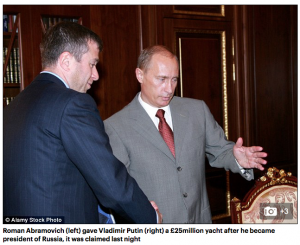 “40 percent of the steel created so far was manufactured in Canada by a subsidiary of Evraz, a company 31-percent owned by Russian oligarch Roman Abramovich, who is a close ally of Putin and a Trump family friend. Evraz has also actively lobbied against provisions which would mandate that Keystone XL‘s steel be made in the U.S.

“Abramovich is described in the 2004 book Abramovich: The Billionaire from Nowhere by British journalists Dominic Midgley and Chris Hutchins as ‘one of the prime movers behind the establishment of the only political party that was prepared to offer its undiluted support to Putin when he fought his first presidential election in late 1999. When Putin needed a shadowy force to act against his enemies behind the scenes, it was Abramovich whom he could rely on to prove a willing co-conspirator.’

“Evraz describes itself as ‘among the top steel producers in the world based on crude steel production of 14.3 million tonnes in 2015.’”

According to a January 2016 piece in The Daily Mail, Abramovich, who also owns the UK’s Chelsea Football Club, gifted Mr. Putin with a 187 foot yacht worth 25 million British pounds after he became Russian President. 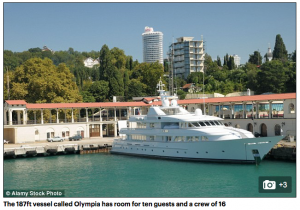 The continuation of construction for the Keystone pipeline was the object of months of protest by the Rosebud Sioux and other South Dakota tribes.

Friday’s announcement of the reversal on Mr. Trump’s initial pledge to mandate U.S. steel is an example of how a  Presidential directive can produce an immediate benefit to a Russian billionaire with direct links to Mr. Putin, even if sanctions imposed in 2014 following Russia’s invasion of Ukraine aren’t lifted.

This week, a series of revelations by The Times, The Washington Post and USA Today regarding meetings during the campaign and transition with Russian Ambassador Sergey I. Kislyak by key Trump officials and advisors including former Senator (now U.S. Attorney General) Jeff Sessions, Lt. General Flynn and Trump son-in-law Jared Kushner, have touched off a firestorm on Capitol Hill that led to Mr. Session’s recusal Thursday from any current or future probe of Russian interference in the 2016 campaign.

But that recusal doesn’t encompass the transition or the new Trump administration post-inauguration and a number of Democrats including Minority Leader Chuck Shumer (D-NY) have demanded that the Attorney General resign and that a Watergate-style Special Prosecutor be appointed to investigate both Russia’s impact on the election and any influence it may hold over the 45th president himself.

In a related matter Rep. Adam Schiff (D-CA), the ranking member on the House Intelligence Committee complained Thursday that the FBI has failed to share enough information with the committee about its reported ongoing investigations of Russia’s interference in the election and possible financial transactions between Russian individuals and companies believed to have links to Trump associates.

Trump reverses pledge to mandate U.S. steel for Keystone Pipeline. A direct beneficiary is a Russian oligarch with close ties to Vladimir Putin added by Peter Lance on March 5, 2017
View all posts by Peter Lance →