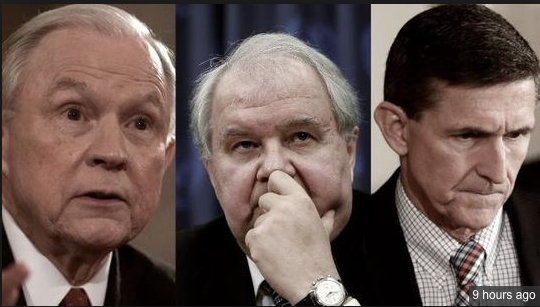 Attorney General Jeff Sessions is not the only member of President Trump’s campaign who spoke to Russian Ambassador Sergey Kislyak at a diplomacy conference connected to the Republican National Convention in July. At least two more members of the Trump campaign’s national security officials also spoke with Kislyak at the event, and several more Trump national security advisers were in attendance.

It’s unknown what the Trump campaign officials who spoke with the ambassador – J.D. Gordon and Carter Page – discussed with him. Those who took part in the events in Cleveland said it is not unusual for presidential campaign teams to interact with diplomats.

However, the newly-revealed communications further contradict months of repeated denials by Trump officials that his campaign had contact with officials representing the Russian government.

The Justice Department’s acknowledgement Wednesday that Sessions spoke with Kislyak twice in 2016 has led to calls for him to recuse himself from investigations into the Trump team’s contact with Russia. By Thursday afternoon, Sessions said he would recuse himself.

Multiple attendees at the Global Partners in Diplomacy event in Cleveland said the contacts between diplomats and political officials are not unusual. The program schedule and social media photographs shows ambassadors from dozens of countries attended, alongside many of the original national security advisors to Trump’s campaign.

Gordon, who managed the advisory committee as the Trump campaign’s director of national security, said that while he also spoke with Kislyak in Cleveland, it is not unusual for a presidential campaign to interact with diplomats.

“I’d consider it an informal conversation just like my interactions with dozens of other ambassadors and senior diplomats in Cleveland,” Gordon said.

Page, another member of the Trump campaign’s national security advisory committee who also spoke with Kislyak in Cleveland, cited “confidentiality rules” in declining to say what he discussed with the ambassador.

Trump team issued at least 20 denials of contacts with Russia

Sessions was more than Trump surrogate in meetings with Russian envoy

“I had no substantive discussions with him,” said Page, who left the campaign later in the summer amid controversy over a speech he gave in Moscow in early July criticizing American foreign policy and sanctions against Russia.

Hossein Khorram, an RNC delegate from Washington State who wasn’t part of Trump’s campaign, attended the diplomacy event and said it provided a forum for diplomats to share their concerns with GOP officials. After formal panel discussions, the attendees broke off into informal conversations.

“Basically the ambassadors — including the Russian ambassador — they were expressing their, mainly, fears about the war on terror and collaborating with the United States,” he said. “There was no promises made on behalf of the Trump administration.”

Sessions, Gordon, and Trump campaign national security advisory committee member Walid Phares all spoke on stage at the Global Partners in Diplomacy program on July 20 in an auditorium at Case Western Reserve University, according to the program schedule and pictures posted on social media. Current Deputy National Security Advisor KT McFarland was also present at the day’s sessions.

Phares did not respond to email and phone requests for comment. Another member of the national security advisory committee who was at the Cleveland event, Joseph Schmitz, referred questions about his interactions with Russian officials to Trump spokeswoman Hope Hicks.

Hicks has categorically denied any communication between the campaign and the Russian government. “The campaign had no contact with Russian officials,” she said in November.