WASHINGTON — Attorney General Jeff Sessions, facing a chorus of criticism over his contacts with the Russian ambassador, recused himself Thursday from any current or future investigation of Russian meddling in the 2016 presidential election. His conversations with the ambassador, Sergey I. Kislyak, came amid suspected Russian hacking directed at Hillary Clinton’s campaign.

Mr. Sessions said he made the decision after meeting with senior career officials at the Justice Department. He said he would not take part in any investigations “related in any way to the campaigns for president of the United States.”

The remarks by Mr. Sessions came not long after President Trump on Thursday expressed his support for Mr. Sessions and said he should not recuse himself from the investigation. Mr. Sessions was a key adviser and surrogate for Mr. Trump’s campaign.

Touring the U.S.S. Gerald R. Ford, the newest American aircraft carrier, in Newport News, Va., Mr. Trump said that he “wasn’t aware” that Mr. Sessions had spoken to the ambassador, but that he believed the attorney general had testified truthfully to the Senate during his confirmation hearing.

“I think he probably did,” Mr. Trump told reporters.

Asked whether Mr. Sessions should recuse himself in the Russia investigations, the president said, “I don’t think so.” 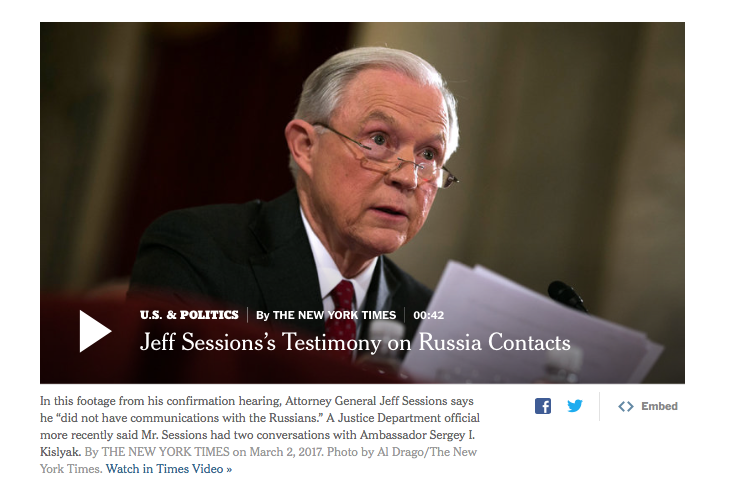 Contacts with Russian officials have become a persistent distraction for the Trump administration. Mr. Trump’s national security adviser, Michael T. Flynn, was forced to resign over his conflicting statements about conversations with Mr. Kislyak. Now Mr. Sessions was forced to use his first news conference as attorney general to address questions about his impartiality.

Congressional Republicans began breaking ranks to join Democrats in demanding that Mr. Sessions recuse himself from overseeing an investigation into contacts between the Trump campaign and the Russian government. Those calls came after the disclosure that Mr. Sessions himself spoke with the Russian ambassador last year, in seeming contradiction to his testimony at his confirmation hearing.

The partisan furor that broke out with the Justice Department’s acknowledgment of the contacts late Wednesday began to take on a bipartisan sheen as the controversy spilled into Thursday morning.

Representative Jason Chaffetz, the Utah Republican who leads the Oversight Committee, said on Twitter on Thursday, “AG Sessions should clarify his testimony and recuse himself.” Senator Rob Portman, Republican of Ohio, said in a statement: “Jeff Sessions is a former colleague and a friend, but I think it would be best for him and for the country to recuse himself from the D.O.J. Russia probe.”

The House majority leader, Kevin McCarthy, Republican of California, said on MSNBC’s “Morning Joe” that Mr. Sessions “needs to clarify” his testimony, and at first appeared to indicate that he thought Mr. Sessions should recuse himself from Russia-linked investigations. “I think — the trust of the American people — you recuse yourself from these situations,” Mr. McCarthy said.

“For any investigation going forward,” he said, “you want to make sure everybody trusts the investigation.” Asked to clarify whether that required Mr. Sessions to step aside, he replied, “I think it’d be easier from that standpoint, yes.”

But Mr. McCarthy later backtracked on “Fox and Friends,” saying, “I’m not calling on him to recuse himself.” 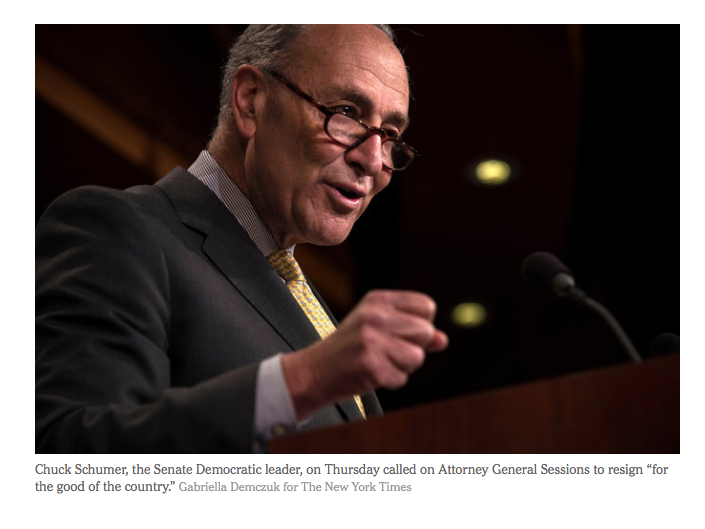 Some Democrats were already going further, suggesting that Mr. Sessions had perjured himself in the confirmation hearing for the attorney general post and demanding that he step down.

“For the good of the country, Attorney General Jeff Sessions should resign,” said the Senate Democratic leader, Chuck Schumer of New York.

The House Democratic leader, Nancy Pelosi of California, took the same position, saying, “Sessions is not fit to serve as the top law enforcement officer of our country and must resign.”

Democrats on the House Judiciary Committee sent a letter on Thursday to the Justice Department and the F.B.I. asking for “an immediate criminal investigation into these statements, which could potentially implicate a number of criminal laws including lying to Congress and perjury.”

The Trump administration dismissed the accusations as partisan attacks, and Mr. Sessions said in a statement issued shortly before midnight that he had not addressed election matters with the ambassador, Sergey I. Kislyak.

“I never met with any Russian officials to discuss issues of the campaign,” Mr. Sessions said. “I have no idea what this allegation is about. It is false.”

In an appearance on NBC News on Thursday morning, Mr. Sessions reiterated that he had not met with the Russian ambassador to discuss the political campaign, but he left the door open to stepping aside from the investigation. “I have said whenever it’s appropriate, I will recuse myself,” he said. “There’s no doubt about that.”

The clash was the latest escalation in the continuing fallout over what intelligence officials have concluded was Russian interference in the 2016 election to help President Trump, including by hacking Democratic emailsand providing them to WikiLeaks for release.

F.B.I. officials have been scrutinizing contacts between people affiliated with the Trump campaign over communication with the Russian government. And last month, the national security adviser, Michael T. Flynn, resigned after it emerged that he had misled Vice President Mike Pence about a conversation with Mr. Kislyak.

Now, Mr. Sessions, formerly an Alabama senator, appears to be at risk of becoming caught in that same wave. He was the first senator to endorse Mr. Trump and became an architect of his populist campaign strategy who sharpened the candidate’s message on immigration and trade. Mr. Sessions became a trusted adviser and is seen as one of the power centers in the administration.

At the confirmation hearing for attorney general in January, Senator Al Franken, Democrat of Minnesota, asked Mr. Sessions about a CNN report that intelligence briefers had told Barack Obama, then the president, and Mr. Trump, then the president-elect, that Russian operatives claimed to have compromising information about Mr. Trump.

Mr. Franken also noted that the report indicated that surrogates for Mr. Trump and intermediaries for the Russian government continued to exchange information during the campaign. He asked Mr. Sessions what he would do if that report proved true.

Mr. Sessions replied that he was “not aware of any of those activities.” He added: “I have been called a surrogate at a time or two in that campaign, and I didn’t have — did not have communications with the Russians, and I’m unable to comment on it.”

But the Justice Department acknowledged on Wednesday that Mr. Sessions had twice communicated with the Russian ambassador last year. The first time was in July, at the Republican National Convention, after he gave a speech at an event for ambassadors sponsored by the Heritage Foundation. The second time was a visit to his office by Mr. Kislyak in September. The Washington Post earlier reported both encounters.

While confirming the conversations, the department played down both. Of the Heritage Foundation encounter, a Justice Department official said the Russian ambassador was among a small group of diplomats who approached Mr. Sessions as he was leaving the stage. The ambassadors, the official said, thanked Mr. Sessions for his remarks and invited him to join them at various events they were sponsoring, but he made no commitments to do so.

Of the office visit, the official said, the discussion focused on relations between the United States and Russia and issues the two countries were facing, although the department left open the possibility that there had been “superficial” comments about news related to the election.

A spokeswoman for the Justice Department, Sarah Isgur Flores, said “there was absolutely nothing misleading” about Mr. Sessions’s answers at his confirmation hearing. She said that Mr. Sessions, as a senior member of the Senate Armed Services Committee, had at least 25 conversations with foreign ambassadors, including those from Australia, Britain, Canada, China, Germany, India, Japan, Korea, Poland and Russia.

She added: “He was asked during the hearing about communications between Russia and the Trump campaign — not about meetings he took as a senator and a member of the Armed Services Committee.”

But Democrats were unassuaged. In a statement, Mr. Franken called Mr. Sessions’s testimony “at best misleading,” noting, “It’s clearer than ever now that the attorney general cannot, in good faith, oversee an investigation at the Department of Justice and the F.B.I. of the Trump-Russia connection, and he must recuse himself immediately.”

Senator Claire McCaskill, Democrat of Missouri, cast doubt on Mr. Sessions’s explanation that he had met with the Russian ambassador because of his duties as a member of the Senate Armed Services Committee, saying that was beyond the panel’s jurisdiction.

“I’ve been on the Armed Services Com for 10 years,” she wrote on Twitteron Thursday. “No call or meeting w/Russian ambassador. Ever. Ambassadors call members of Foreign Rel Com.”

And Representative Elijah E. Cummings of Maryland, the ranking Democrat on the Oversight Committee, went further, calling for Mr. Sessions to resign because he let a “demonstrably false” statement stand for weeks without correcting the public record.

“There is no longer any question that we need a truly independent commission to investigate this issue,” Mr. Cummings said.