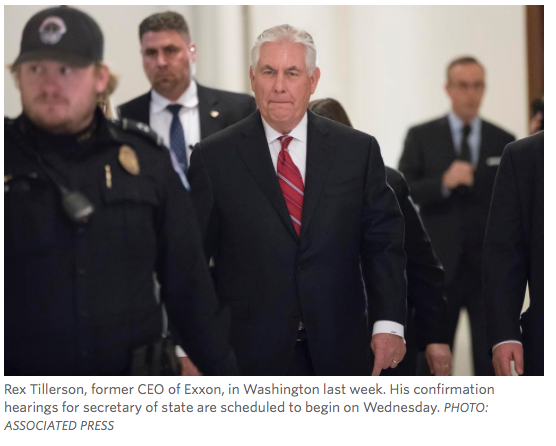 MOSCOW—In the spring of 2014, after the U.S. punished Russia with sanctions for seizing Ukrainian territory, Rex Tillerson made a major decision. The Exxon Mobil Corp. chief executive, now Donald Trump ’s nominee for secretary of state, would deepen his company’s longstanding partnership with the Kremlin.

During negotiations, the CEO of Rosneft, the Kremlin’s state-controlled oil company, looked over a proposed contract related to the pair’s operations off Sakhalin Island, in Russia’s Far East, and scowled, said a person with knowledge of the meeting. Exxon, he said, put language in the contract he didn’t expect. He looked at Mr. Tillerson and tore it up.

Mr. Tillerson, the person said, leaned back, put his hands together, smiled silently—and waited. With billions of dollars already invested, the Russians had few other options. Rosneft’s CEO, a former intelligence officer and top Putin ally named Igor Sechin, eventually backed down, and an agreement was struck.

A look at Mr. Tillerson’s negotiating style, honed over years at the head of one of the world’s largest oil companies, shows an executive determined to hold the course, even when the landscape shifts dramatically. Personal relationships were often a deciding factor. So were deliberately theatrical tactics, such as preplanned temper tantrums and silent stare-offs.

The question for the Senate, which is expected to consider Mr. Tillerson’s nomination on Wednesday, is to what extent this kind of expertise prepares him for the job of secretary of state. He has vast experience hammering out multibillion-dollar deals that potentially span decades with government leaders of all stripes. On the other hand, a company is not a country.

The former Exxon chief’s dealings with Rosneft are likely to be a major line of questioning from both Republicans and Democrats, many of whom have said they are uncomfortable with Mr. Tillerson’s close ties there in the wake of Russia’s alleged hacking attack on figures in the Democratic Party.

The Russia deals added hundreds of millions of dollars to Exxon’s bottom line and billions of barrels of potential reserves to bolster the company’s future production. At the same time, they ran afoul of State Department priorities at a time when the U.S. was using sanctions to try to check Russian military interventions in Ukraine. 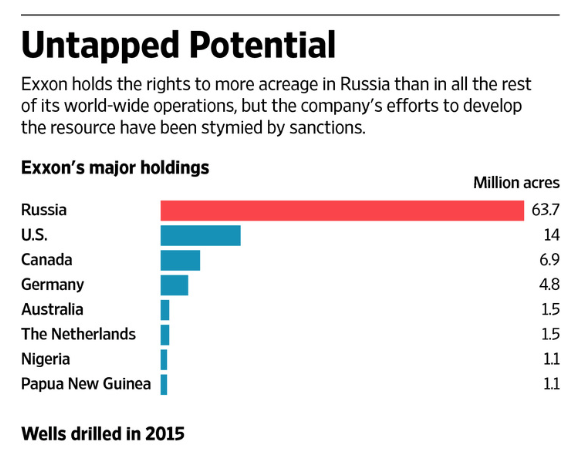 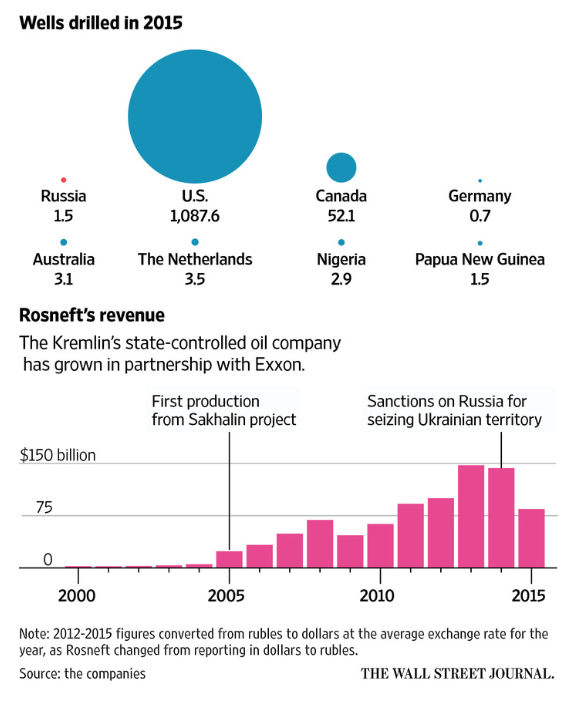 For Exxon, one of the world’s largest publicly traded oil companies, the results of the Russia deals are mixed. The deals struck in 2014, which technically expanded projects already in operation, didn’t violate sanctions, which targeted the spread of oil and gas technology. But other projects, especially a vast Arctic investment, ground to a halt, blocking Exxon’s access to rich reserves it hoped would ease its longtime struggle to find new resources.

“This is an industry with very long timelines,” said Alan Jeffers, an Exxon spokesman. “The current situation prevents us from activities in the area that are sanctioned, but we see that as a pause.” 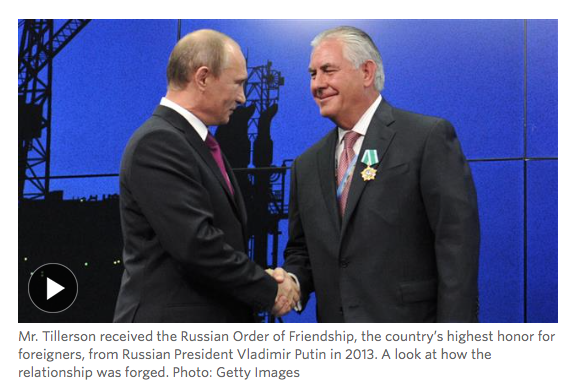 Mr. Tillerson, who joined Exxon in 1975 and became CEO in 2006, specialized in the types of deals that typified the oil industry in the run-up to the recent price crash: Giant agreements, sometimes in unstable places, that cost billions of dollars to develop and aimed to produce huge volumes of oil and gas over decades.

He spent hours with the company’s negotiating teams, preparing for every potential aspect and plotting tactics, including the theatrical, according to people he worked with.

In a meeting in Yemen in the 1990s, he threw a book and stormed out of talks. The tantrum was preplanned, one person said. “Anger is a strategy, not an emotion,” Mr. Tillerson told colleagues.

He negotiated deals worth more than the GDP of some countries with officials who had vast power but lacked expertise. That meant he dealt with concerns other than money, such as a leader’s desire for Exxon to educate local workers or help a state-owned oil company gain technology.

He drank tea with tribal leaders and showed off Exxon facilities to visiting dignitaries.

In interactions with Russian leaders, Mr. Tillerson avoided giving any impression of American superiority, especially amid the post-Cold War tensions of the 1990s.

In a 2004 interview with The Wall Street Journal he described how when a Russian minister in the 1990s slammed his fist on the bargaining table in a dispute over a permit, raising images of former Soviet leader Nikita Khrushchev, he gingerly brought him back to the discussion.

“You make yourself very aware of it, and almost go out of your way to make sure there’s nothing that conveys” a superior attitude, he said. At the same time, he rarely budged on terms, seeking to project strength, said people familiar with his negotiating style.

Mr. Tillerson arrived in post-Soviet Russia in 1997 to chase the same prize as every other big Western oil executive: access to the country’s vast stores of untapped crude. 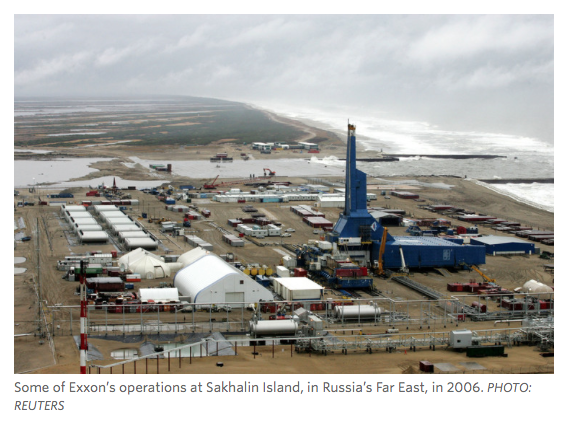 He set up in a suite in the Metropol Hotel, just steps from Red Square, and tried to make sense of a Kremlin in turmoil. Russia cycled through six prime ministers in Mr. Tillerson’s first 14 months.

Even before the musical chairs ended with Mr. Putin in charge, in 1999, Exxon realized something its Western rivals didn’t. Joining with the Kremlin could shield the company from hostile takeovers by other state-owned firms and regulatory obstacles from the Russian government.

At a time when other Western oil giants dismissed state-owned companies as too bureaucratic and inflexible, Exxon committed to an ambitious project with Rosneft to develop an oil and gas field near Sakhalin Island. It would cost billions of dollars to develop and be one of the most technically complex projects in Exxon’s history, with oil and gas deep beneath sea ice in an area prone to earthquakes and 50-foot waves.

Over the years, it would be expanded multiple times. In the past decade, the partners have produced more than 300 million barrels from three separate fields, with a potential peak of 200,000 barrels a day, Exxon said.

Mr. Tillerson had a key person on the ground, a personable, Russian-speaking Croat named Zeljko Runje, who formed close relationships with Rosneft executives and years later would help pull off an even bigger Russian deal for Exxon.

When it first partnered with Exxon, Rosneft “had no equipment, they had no technology,” a former Rosneft executive said. Exxon’s expertise and financing helped build Rosneft into one of the world’s largest producers, which strengthened Russian President Vladimir Putin’s grip on power. Energy revenues allowed him to boost spending at home and to project power abroad; Rosneft’s dominance gave him control of Russia’s most important industry.

In 2004, the Kremlin seized assets from OAO Yukos, then the country’s largest oil company, and Rosneft took control of its main production unit, becoming the country’s second-largest producer.

Exxon worked closely with Moscow to devise legislation on taxation and other issues that affected its investment, according to Igor Yusufov, Russia’s energy minister from 2001 to 2004.

Mr. Tillerson met with ministers and gave suggestions for legislation, Mr. Yusufov said. “He met everyone,” the Russian said. “He helped us to formulate the relationship between the state and investors.”

During a U.S.-Russia energy summit in Houston in 2002, Mr. Tillerson wooed Mr. Yusufov with a trip to Exxon facilities, where he showed the Russian minister a 3-D model of the Sakhalin project as it was at the time and as it would look at peak production.

Mr. Tillerson worked closely with Rosneft executives as the project began producing in 2005. He and then-Rosneft CEO Sergey Bogdanchikov landed their private jets at tiny Teterboro Airport, in suburban New Jersey, in 2006 and discussed Sakhalin and Rosneft’s coming initial public offering, said a person familiar with the talk.

Mr. Sechin, who had spent years in intelligence in Africa and elsewhere and later became a Kremlin political operative close to Mr. Putin, had become chairman of Rosneft in 2004. He took over as CEO in 2012 with the aim of extending its reach. His underlings quickly came to fear his 3 a.m. calls ordering them to pack for a trip to Asia as much as his outbursts at meetings over frustrations like project delays, former executives said.

He and Mr. Tillerson developed a comfortable rapport, said people who attended their meetings. Mr. Sechin was careful to show Mr. Tillerson he had the highest-possible backing. Two or three times a year or more, Mr. Sechin would ask Mr. Putin to speak, by phone or in person, with Mr. Tillerson, said one of the people.

Mr. Sechin came to like Mr. Tillerson because he was transparent and forceful in his communications—and was one of the few Western executives strong enough to push back against Mr. Sechin, said people familiar with the matter. 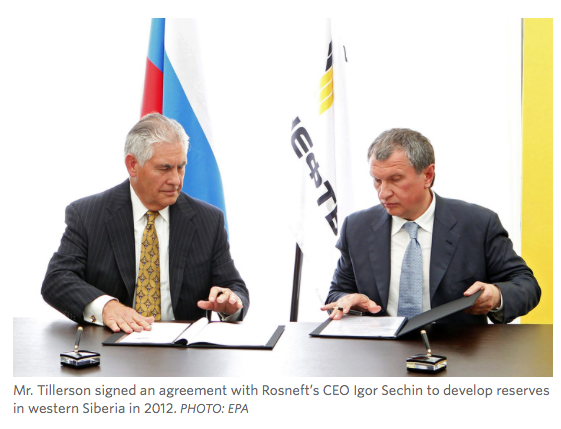 The relationship helped Exxon land one of its biggest coups. In 2011, Exxon rival BP PLC reached a deal for access to a giant Rosneft-controlled Arctic field, but BP’s oligarch partners in a separate Russian joint venture blocked the deal.

Exxon’s longtime Russia hand, Mr. Runje, who had been key to the Sakhalin project more than a decade earlier, saw an opening and sent a message to Mr. Tillerson, said people familiar with the matter. Mr. Runje declined to comment.

Messrs. Tillerson and Sechin hashed out a $3.2 billion deal that was to be one of the biggest exploration contracts ever. It gave Exxon access to the Arctic fields BP lost, as well as basins in Siberia and in the Black Sea.

Mr. Putin, who had come to trust Mr. Tillerson as a man of his word, blessed the deal and said investment could eventually reach $500 billion.

Mr. Putin later awarded Mr. Tillerson the Russian Order of Friendship, the country’s highest honor for foreigners, after a request by Mr. Sechin, according to a person familiar with the matter.

By late 2014, when the partners hit oil and gas in the Arctic, sanctions by the U.S. and other countries were in place barring companies from sending oil and gas exploration technology to Russia, bringing operations to a halt.

In Washington, Exxon lobbied against the sanctions. Mr. Tillerson and others told senior officials that because of the complexity of the Arctic project Exxon couldn’t immediately pull out without significant safety and environmental risks.

The CEO also said U.S. sanctions applied to an existing project, unlike European sanctions, which exempted developments already under way, people familiar with the matter said.

Exxon withdrew from its Arctic project, and Mr. Tillerson stayed home from a St. Petersburg economic summit in 2014 for the first time in years. He continued to attend to Russia business, including efforts to build a gas export plant at Sakhalin and other operations.

“Over the years, I think we have earned each other’s respect,” Mr. Tillerson told students at an event in March 2015 at Texas Tech University. When Exxon says “yes,” he told them, the Russians would know that the company would “follow through on that yes. Your commitment means something. And so I think it’s the most important attribute.”