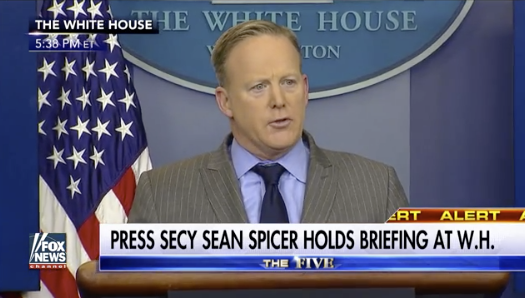 By Peter Lance January 21st, 2017 The Huffington Post. In his first official press conference WH Press Secretary Sean Spicer claimed today that photos of the inauguration were “intentionally framed in a way… to minimize the enormous national support that had gathered (yesterday) on The National Mall.”

Asserting that white “floor coverings” to protect the grass “had the effect of highlighting any areas where people were not standing,” he also alleged that “fencing and magnetometers” prevented “hundreds of thousands of people from being able to access the mall as quickly as they had in inaugurations past.”

In light of a NYT estimate that 150,000 visitors were on The National Mall for yesterday’s inauguration compared to official estimates cited in the LAT of 500,000 in Greater D.C. for today’s “Woman’s March,” Spicer’s attack was the second time within hours that the question of how many visitors attended the inauguration drew national media coverage.

Earlier, in a visit to the CIA in what was initially billed as an attempt at “fence-mending,” President Trump devoted a significant portion of his remarks in front of the agency’s revered Memorial Wall to the size of his inaugural crowd and what he called his “running war with the media.” 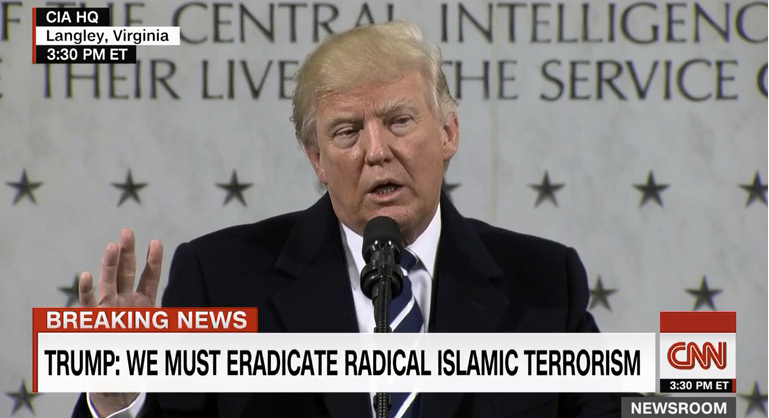 Failing to mention any of his previous Tweets attacking the Intelligence Community including one 10 days ago suggesting it had allowed “fake news” to leak and comparing the IC to “Nazi Germany,” the President told a gathering of Agency employees today, “I am with you 1000%.”

He then went into a long defense of the number of attendees at his inaugural.

“We had a massive field of people. You saw that. Packed. I get up this morning and I turn on one of the networks and they show an empty field. I said, ‘Wait a minute. I made a speech. I looked out. The field was… It looked like a million; a million and a half people.’ They showed a field where there were (sic) practically nobody standing there and they said ‘Donald Trump did not draw well.'”

Later, speaking in the White House Briefing Room, Spicer told reporters that, “This was the largest audience to ever witness an inauguration period, both in person and around the globe.”

He then cited side-by-side pictures published in the printed edition of The New York Times which he claimed, “showed the full extent of the support, depth in crowd and intensity that existed. These attempts to lessen the enthusiasm of the inauguration are shameful and wrong.”

But Spicer’s reference to The Time’s photos was in direct conflict with the paper’s coverage of the inauguration’s crowd size and the pictures themselves. In fact, a story from The Associated Press, published online by The NYT yesterday, reported that:

“Far fewer people attended President Donald Trump’s inauguration Friday than his predecessor’s swearing-in eight years ago. Photos of the National Mall from President Barack Obama’s inauguration in January 2009 show a teeming crowd stretching from the West Front of the U.S. Capitol all the way to the Washington Monument. Photos taken from the same position on Friday show large swaths of empty space on the Mall.

“Thin crowds and semi-empty bleachers also dotted the inaugural parade route. Hotels across the District of Columbia reported vacancies, a rarity for an event as large as a presidential inauguration. And ridership on the Washington’s Metro system didn’t match that of recent inaugurations.”

That piece also accurately reported that as of 11:00 a.m. an hour before the swearing-in there were “193,000 trips taken. At the same hour eight years ago, there had been 513,000 trips. Four years later, there were 317,000 for Obama’s second inauguration.” In fact those numbers were reflected in a DC Metro Tweet:

But at today’s W.H. presser Spicer claimed as “fact,” that “420,000 people used the D.C. Metro Transit System yesterday.” While that might have been an accurate figure for the total number of rides all day, his figure more than doubled the actual number of riders in the hours leading up to the Oath of Office.

As to the pictures published in The Times judge for yourself or CLICK THE IMAGE for a blowup. The Obama 2009 inauguration is at left. President Trump’s is at right accompanied by this commentary:

“The analysis by Keith Still, a professor at Manchester Metropolitan University in England, estimates that the crowd on the National Mall on Friday was about one-third the size of Mr. Obama’s. Professor Still was a crowd safety consultant for the 2011 royal wedding of Prince William and Kate Middleton, and has advised the Saudi government on crowds for the hajj, the annual pilgrimage to Mecca.

“The initial analysis was limited in scope because footage of a larger area was not yet available. The number of people on the National Mall is typically a fraction of the total crowd that gathers for a presidential inauguration. In 2009, for example, about 460,000 of the estimated 1.8 million people who attended President Obama’s inauguration were on the National Mall. 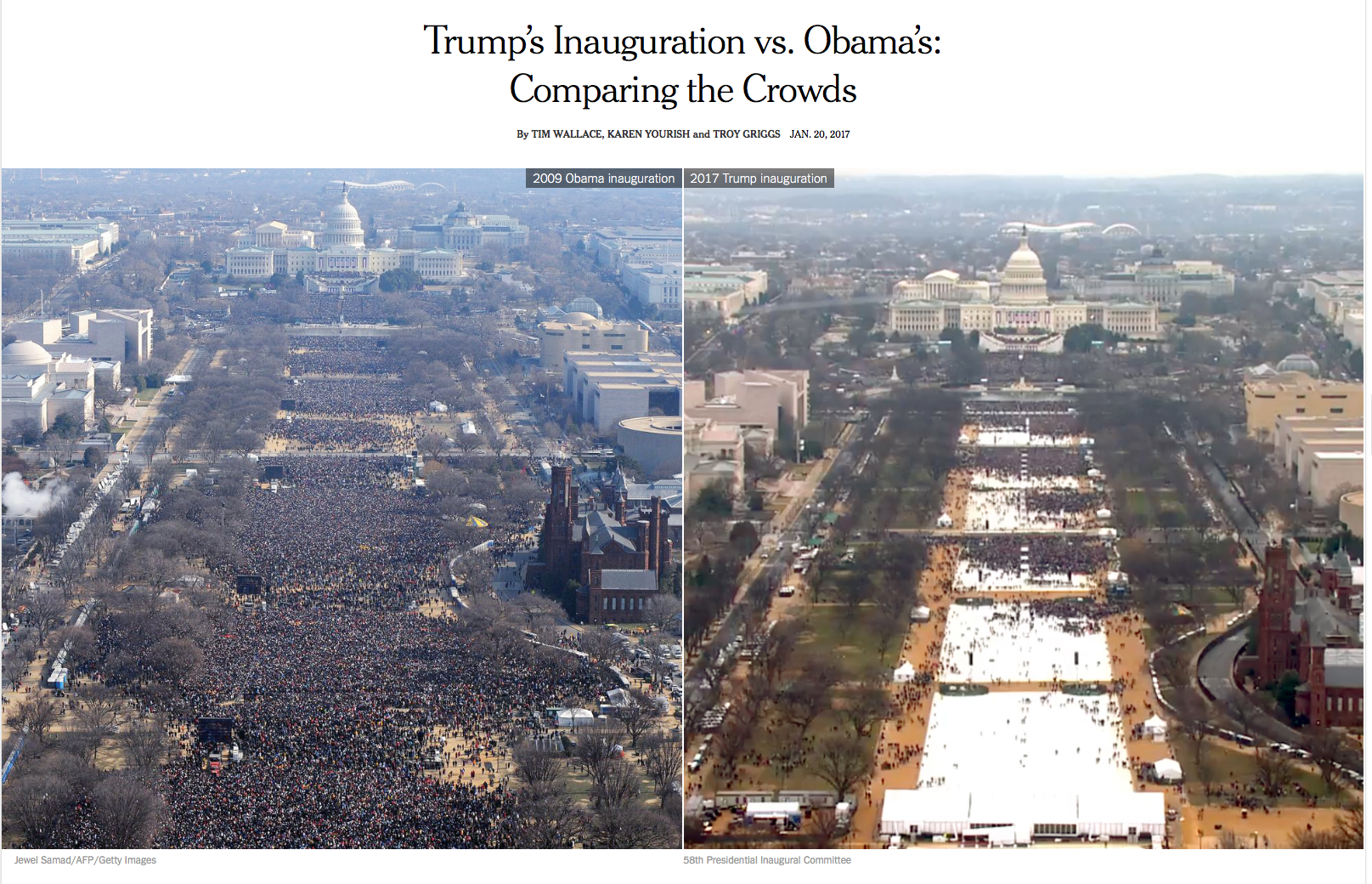 THE WHITE COVERINGS WERE EMPTY CHAIRS

Regarding Spicer’s assertion that white coverings tended to minimize the size of the crowd in the high shot taken yesterday from the Lincoln Memorial, a photo accompanying that same A.P. story in The Seattle Times, showed that the white area Spicer described as protecting the grass was actually the section of The National Mall containing the hundreds of unused seats set out for visitors. 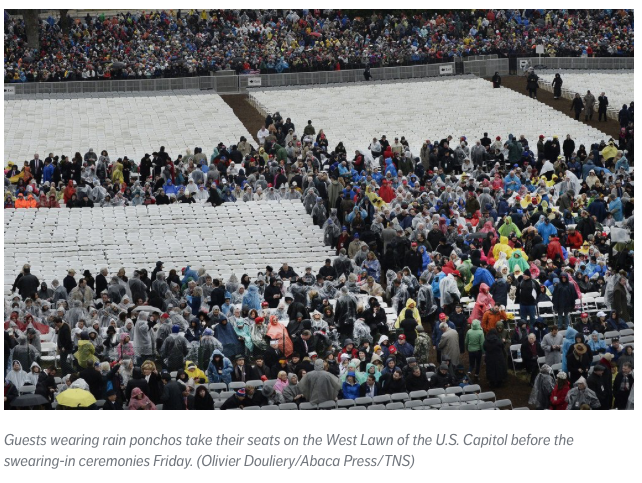 Both the President’s statements at the CIA, in which he boasted that he’d appeared on a record number of Time Magazine covers and Spicer’s remarks at the press briefing seemed aimed at deflecting attention from the massive crowds at today’s Woman’s March in Washington which drew an estimated half million: 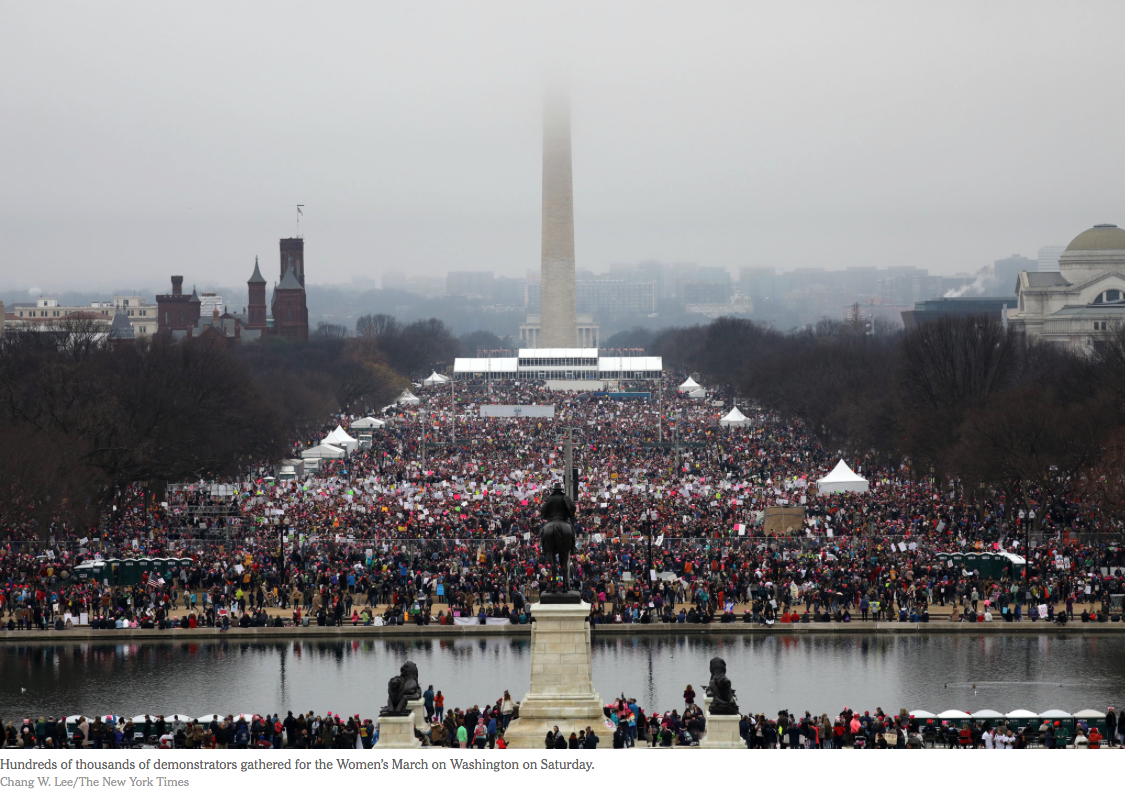 But Press Secretary Spicer refused to accept those estimates. “Inaccurate numbers involving crowd sizes (for the Inauguration) were also Tweeted,” he said. “No one had numbers because The National Park Service, which controls The National Mall does not put any out. By the way, this applies to any attempts to count the size of the (Women’s March) protesters today in the same fashion.”

But an A.P. story in The L.A. Times  at 10:37 EST this morning quoted a District of Columbia “city official” as putting the number at 500,000 and The Washington Post cited the worldwide number for today’s mass protests as being in the “millions.”

Further, Spicer’s assertion that the numbers couldn’t be accurately estimated, ran counter to his boss’s claim at the CIA earlier that his inauguration had drawn up to a million and a half.

ANOTHER “WALL” ISSUE THAT COULD DOG DONALD TRUMP

“Listen, that is hallowed ground at the CIA,” Sciutto said. “Those stars represent the men and women killed in the service of their country. Those are the words over those stars behind President Trump’s head there. One of them was for Johnny Michael Spann. He was the first American killed in Afghanistant after the invasion after 9/11.

“The first words out of Donald Trump’s mouth in that hallowed spot — I’m not saying it’s the equivalent of The Tomb of The Unknown Soldier, but for the CIA, in effect it is. These are unknown faceless individuals who gave their lives for the country. The first comment from the President’s mouth there was about favorable Fox News coverage.”