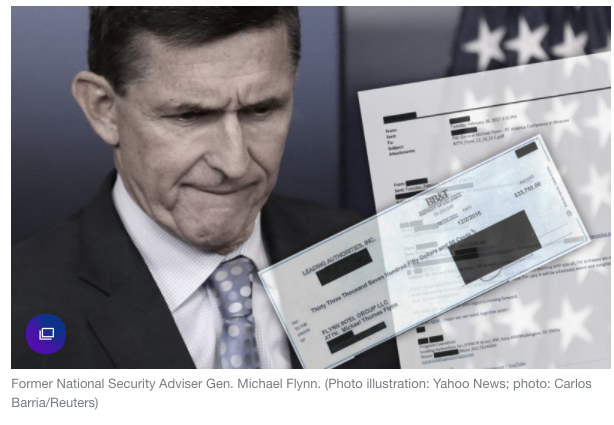 RT, the Russian state-owned television network described by U.S. intelligence officials as “the Kremlin’s principal international propaganda outlet,” paid $45,386 for former Defense Intelligence Agency Director Michael Flynn to fly to Moscow to speak at its 10th anniversary celebration in December 2015, according to documents newly obtained by a congressional committee and provided to Yahoo News. CLICK IMAGE ABOVE for link to story.

At the Russian government’s expense, Flynn — who was fired last month as President Trump’s national security adviser — was accompanied by his son, Michael Flynn Jr., on the three-day, all-expenses-paid trip, where they both stayed at the five-star Hotel Metropol in Moscow next to Red Square, according to documents obtained from Flynn’s speakers’ bureau, Leading Authorities.

The agency took a 25 percent commission, leaving $33,750 for Flynn. The Moscow booking was one of three speaking engagements the ex-DIA chief received from Russian interests after being fired from his Pentagon post in 2014 and before joining the Trump campaign as its principal national security adviser, the documents turned over to the committee show. 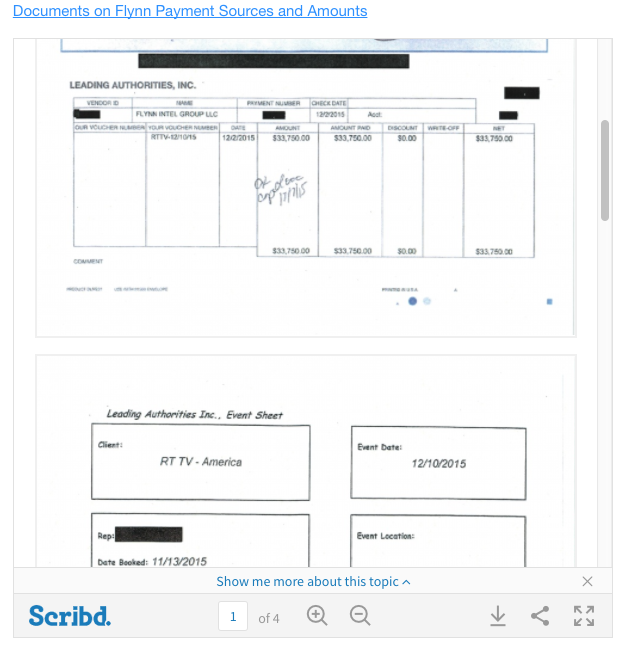 The other payments, of $11,250 each, were by two Russian companies, Volga-Dnieper, a cargo airline, and Kaspersky Government Security Solutions, a computer firm. Both talks appear to have been to U.S. subsidiaries of the companies, which are privately owned.

Still, congressional Democrats charge that the funds Flynn collected from government-funded RT (formerly known as Russia Today) appear to violate Pentagon rules that subject retired military officers to the “emoluments clause” in the U.S. Constitution, prohibiting them from accepting any “consulting fees, gifts, travel expenses, honoraria or salary” from a foreign government.

“I cannot recall any time in our nation’s  history when the President selected as his National Security Advisor someone who violated the Constitution by accepting tens of thousands of dollars from an agent of a global adversary that attacked our democracy,” Rep. Elijah E. Cummings, D-Md., the ranking minority member of the House Oversight and Government Reform Committee, wrote in a letter sent Thursday to President Trump, Defense Secretary James Mattis and FBI Director James Comey.

Flynn did not respond to a request for comment from Yahoo News on Thursday.

Cummings asked the president to turn over forms Flynn filled out to obtain his White House security clearance to determine if he fully disclosed his Russian government payment as well as any contacts he would have had with Russian government officials during the trip. (While in Moscow, Flynn was seated at a black-tie dinner next to Russian President Vladimir Putin.) Cummings also asked that Mattis implement a clause in Pentagon rules that directs officials to retrieve any funds that retired military officers received from foreign governments and turn them over to the U.S. Treasury. 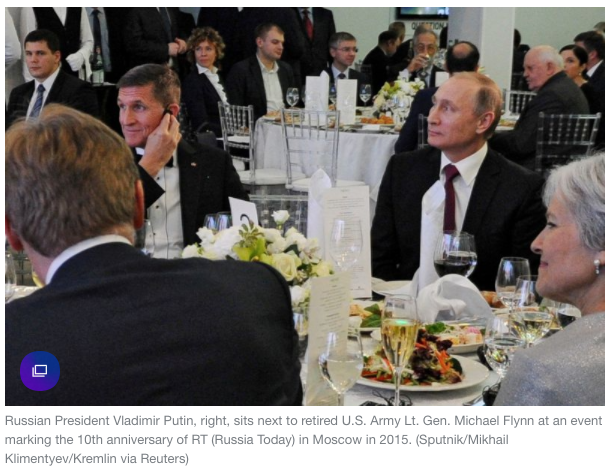 The new disclosure about Flynn’s RT payment comes a week after the retired lieutenant general retroactively filed documents with the Department of Justice registering as an agent of the government of Turkey, under a $530,000 contract with a Dutch front company owned by a political ally of the Turkish president. While being paid under the contract, which was signed last August, Flynn was also a top national security adviser to the Trump campaign and sat in on intelligence briefings Trump received as the Republican nominee.

The disclosure also comes a month after Flynn was fired for misleading White House officials — including Vice President Mike Pence — about his conversations with Russian ambassador Sergey Kislyak last December and whether they discussed U.S. sanctions imposed by President Obama over Moscow’s efforts to influence the 2016 election.

Questions about Flynn’s 2015 appearance in Moscow first arose last July during an interview at the Republican National Convention in Cleveland, when Yahoo News pressed him on who paid for the trip. 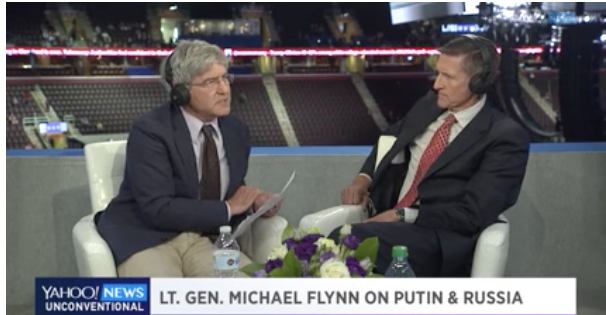 “I didn’t take any money from Russia, if that’s what you’re asking me,” Flynn said at first. Then when asked who did him pay him, Flynn replied: “My speakers’ bureau — ask them.”

In a later interview with the Washington Post, Flynn was asked about why he had made regular appearances on RT, given that it was “state run.” His reply: “Well, what’s CNN?”

The House committee, in a letter signed by Cummings and the panel’s chairman, Rep. Jason Chaffetz (R-Utah), last month, took up Flynn’s suggestion of inquiring of his speakers’ bureau: It asked Leading Authorities to turn over all documents about Flynn’s speaking engagements, including the Russia trip. In a move that surprised even some staffers, the speakers’ bureau complied, including providing the committee with a series of emails from RT officials and producers as well as copies of the contracts Flynn and leading authorities signed with the Russian network.

“As one of the world’s leading voices on national security issues, your presence will be invaluable to RT’s ‘Changes in the Global News Media Landscape’ International Conference,” an RT producer wrote in an email to Flynn on Oct. 14, 2015, that was initially forwarded to Leading Authorities.

The documents show the trip was financed by RT TV-Russia, the network’s Moscow headquarters, and paid through a London bank used by the network.

EDITOR’S NOTE: this second set of documents has been removed from Scribd. 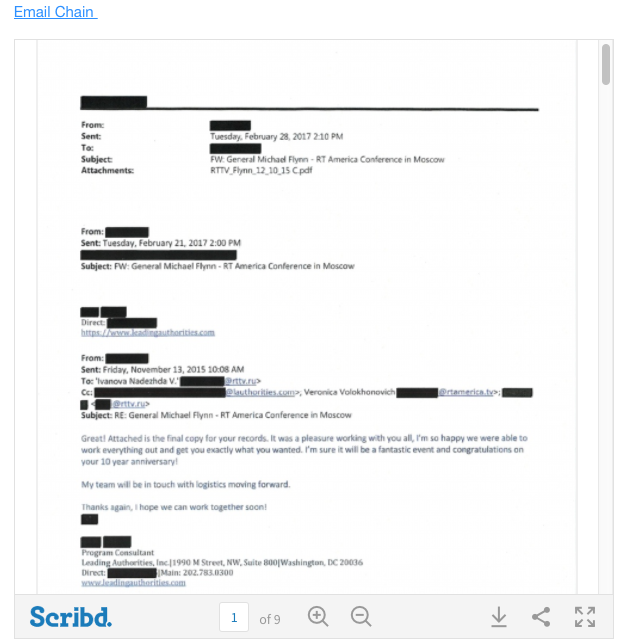 Flynn’s trip has drawn criticism from some former national security officials as a case of bad judgment, at a minimum, given RT’s key role in promoting Russian government interests and working against the U.S. U.S. intelligence officials had been raising red flags about the issue for years — including while Flynn was serving as director of the DIA, the Pentagon’s top intelligence official.

A Dec. 12, 2012, report, published by the CIA’s Open Source Center five months after Flynn took over at DIA, described RT’s U.S. branch as a Russian government “messaging tool,” part of a “Kremlin-directed campaign to undermine faith in the U.S. government and fuel political protest.” The report also noted that the Kremlin had committed “significant resources to expanding” RT’s global reach, spending $190 million a year to distribute its programming to hotels and on cable stations around the world. The network’s editor in chief had close ties to top Kremlin officials, the report said, and Putin had personally intervened to protect the network station from any budget cuts.

An updated version of that report was attached as an appendix to the Jan. 7, 2017, U.S. intelligence community assessment concluding that Putin had ordered a multifaceted “influence campaign” — including cyberattacks — to disrupt the 2016 presidential election by discrediting Hillary Clinton and boosting Trump. The U.S. intelligence assessment noted that RT has “actively collaborated with WikiLeaks.” It said the network’s editor in chief had visited Julian Assange at the Ecuadorian Embassy in London in 2013 to discuss “renewing his broadcast contract with RT” and that Russian media later reported that RT had partnered with the organization to receive access to “new leaks of secret information.”