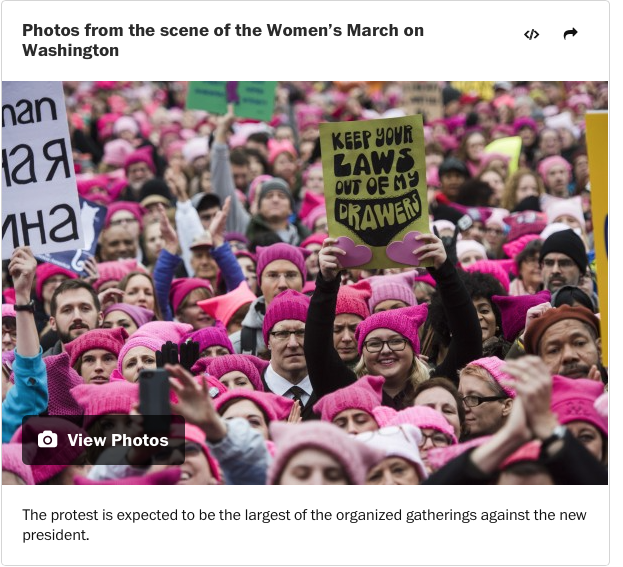 Millions of women gathered in Washington and cities around the country Saturday to mount a roaring rejoinder to the inauguration of Donald Trump one day earlier. The historic protests of a new president packed cities large and small — from Los Angeles and Boston to Stanley, Idaho and Lander, Wyo. In Chicago, the demonstration was overwhelmed its own size, forcing officials to curtail its planned march.

In Washington, there was confusion about whether the hundreds of thousands of demonstrators jamming the National Mall had grown too large to formally march to the White House.

Janaye Ingram, who is charge of logistics for the Women’s March, went to the microphone Saturday afternoon to announce that the actual marching would still happen — just not using the original route.

“We are marching, and we are using Constitution Avenue,” she told the massive gathering. And the Women’s March twitter account declared: “We are marching! We are marching straight ahead toward the Washington monument to the ellipse! #WomensMarch”.

The Washington organizers, who originally sought a permit for a gathering of 200,000, said Saturday that as many as a half million people participated, dwarfing Friday’s inaugural crowd. 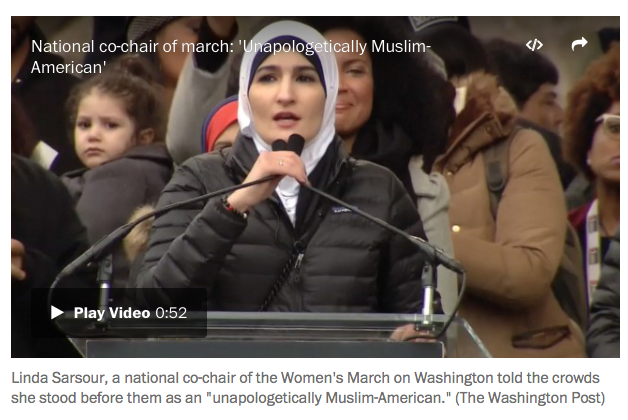 Similar scenes unfolded around the country. In Chicago, after a 150,000 demonstrators swamped downtown blocks, officials cancelled the march portion of the event.

In Los Angeles, a police spokesman said authorities had begun to temporarily close some of the side streets beyond the scheduled perimeter of the march to accommodate the size of “the crowds spilling over into adjacent streets.”

“We are doing our best to facilitate because they are squeezing into every street right now,” said Capt. Andrew Nieman of the Los Angeles Police Department.

The Boston transit system added extra trains to accommodate tens of thousands of protesters. There were huge crowds in New York, Miami, Denver and Seattle. Women also gathered to condemn Trump in London, Barcelona, Melbourne and other cities around the world.

In Washington, demonstrators came from around the country, sometimes sleeping on the couches of people they had never met before. Many said they wanted to take the most public possible stand against Trump, a candidate and now president whom they said routinely insults women and the issues they care about. But the gathering also provided a balm for many eager to immerse themselves in a like-minded sea of citizens who shared their anxiety and disappointment after Democrat Hillary Clinton’s historic bid for the presidency ended in defeat.

Clinton tweeted her gratitude as the rally got under way at 10 a.m., telling them: “Thanks for standing, speaking & marching for our values @womensmarch. Important as ever. I truly believe we’re always stronger together.” 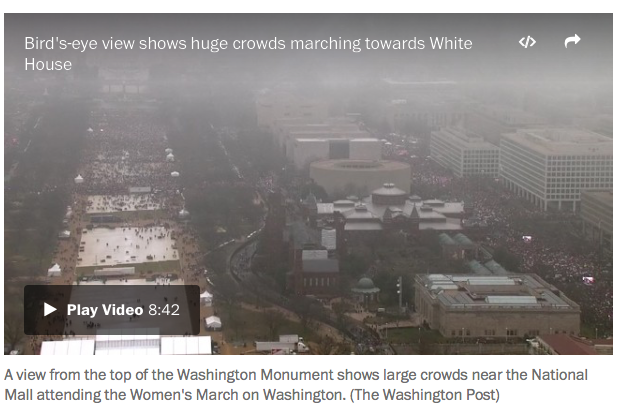 Feminist icon Gloria Steinem, 82, who was among the first speakers, looked out over the huge crowd and exulted, “This is the upside of the downside. This is an outpouring of democracy like I’ve never seen in my very long life.”

Marchers choked Metro lines. Inbound trains were packed with pink-hatted protesters, and the transit agency reported parking lots full at several stations by early in the day. By 11 a.m., Metro had clocked 275,000 transit rides. (By the same hour on Inauguration Day, 193,000 trips had been taken.)

Around the National Mall, the sound system struggled to reach everyone in the massive crowd. Marchers said far more portable toilets were needed. Some stores in the area had been stripped of poster board.

“You won’t get in. We can’t move,” said one woman on the phone from an overrun spot near American Indian Museum. She advised other marchers to seek other spots along the planned route.

Though the marchers were mostly female and white, men and people of color also joined the crowd. Cynthia English, a 61-year-old Jamaican-American living in Florida, said she wanted the new president to know that women will be fighting during his presidency to ensure that the country and laws treat them equally. She was with her daughter and marching for her two granddaughters in that hope that no future president feels comfortable making lewd comments about women.

“I don’t want this to happen to them 20 years from now, so I am making my mark now,” English said. “Why are we the ones that bring people into this world, and we are treated the worst? We should be treated with respect.”

The crowd was buoyant, even joyous. Many held up signs — “I Am Very Upset!” and “Love Trumps Hate” and “Bridges Not Walls” — while others took videos of the moment on their cell phones. Every few minutes, a rolling roar swept over them, echoing through the concrete concourse. D.C. police said they had made no march-related arrests, compared to more than 200 when protesters created choas in downtown Washington.

Judith Snyder-Wagner was among them. The 67-year-old former fundraising consultant said she has sensed a shift in the rural, blue-collar community near Canton, Ohio, where she lives with her wife, Joy. A neighbor mowed a piece of grass along their property line and put up a Trump sign facing their home. Someone recently drove through the neighborhood flying a Confederate flag.

“We’ve been afraid,” Judith Snyder-Wagner said, her voice quavering. She was limping up the sidewalk on Independence Avenue. She has had both her knee and hip replaced, and she held a cane in one hand and a poster in the other. “We just feel like we’re going to lose our civil rights.”

The couple boarded a bus at 1 a.m. Saturday in Ohio and will head home less than 24 hours later. “We needed to feel inspired,” Joy Snyder-Wagner said, looking around. “And we do.”

Trump’s election was the wake up call that progressives needed, said Erin Edlow, 28, the membership director of the Virginia Beach Young Democrats. She was in town with her sister to demonstrate her support for LGBT and immigrant rights.

“Democracy is not a spectator sport,” she said.

The march has turned into the weekend’s star-studded event, with celebrities including Janelle Monáe, Scarlett Johansson and Ashley Judd making appearances. D.C. Mayor Muriel E. Bowser (D) introduced herself as a proud “chick mayor” and implored the Republican majority in Congress to stop meddling in the District’s local lawmaking.

WP: Women’s Marches: Millions of protesters around the country vow to resist Donald Trump added by Peter Lance on January 21, 2017
View all posts by Peter Lance →