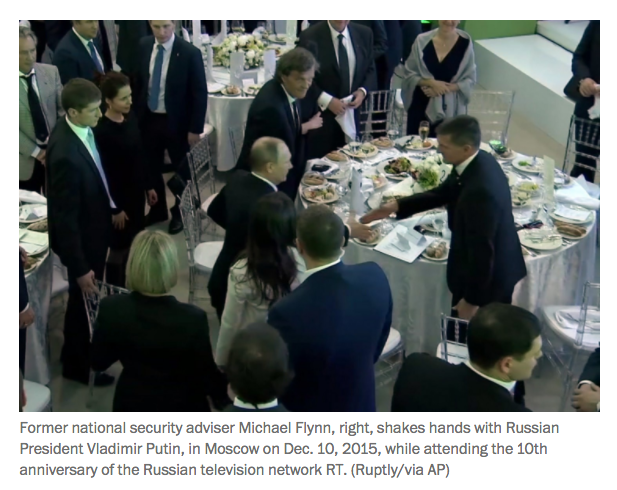 Michael Flynn, who was forced to resign as national security adviser amid controversy over his contacts with Russia’s ambassador, collected nearly $68,000 in fees and expenses from Russia-related entities in 2015, a higher amount than was previously known, according to newly released documents. CLICK IMAGE ABOVE for link to story.

The records show that the bulk of the money, more than $45,000, came from the Russian government-backed television network RT, in connection to a December 2015 trip Flynn took to Moscow. Flynn has acknowledged that RT sponsored his trip, during which he attended a gala celebrating the network’s 10th anniversary and was seated near Russian President Vladi­mir Putin. His speakers bureau took a cut of the fee.

The newly released documents show that Flynn was also paid $11,250 that year by the U.S. subsidiary of a Russian cybersecurity firm, Kaspersky Lab, and another $11,250 by a U.S. air cargo company affiliated with the Volga-Dnepr Group, which is owned by a Russian businessman. The cyberfirm and the airline said the payments were made for speeches Flynn delivered in Washington.

The new disclosures come as Flynn’s interactions with Russia have been under scrutiny. Flynn resigned 24 days after taking office amid reports that he misled Vice President Pence about the nature of his contacts in December with the Russian ambassador.

The retired Army lieutenant general has also drawn criticism for his acceptance of foreign payments during a stint in the private sector after stepping down as director of the Defense Intelligence Agency in 2014.

This month, Flynn filed paperwork indicating that he had been a foreign agent during the months when he was a top adviser to Trump’s campaign. Flynn’s company was hired by a Dutch company owned by a Turkish businessman to do work related to Turkish government interests.

Price Floyd, the Flynn spokesman, said the general, “like many other government officials, signed up with a speakers bureau when he left government service. What you are seeing is the result of that. These are speeches­ that he made after leaving government.” He said that Flynn reported the December 2015 Moscow trip to the Defense Intelligence Agency before and after it occurred.

The newly disclosed documents were released by Rep. Elijah E. Cummings (Md.), the top Democrat on the House Oversight and Government Reform Committee. He included the additional payments to Flynn in a letter to Trump, Defense Secretary Jim Mattis and FBI Director James B. Comey, questioning whether Flynn’s fees violated prohibitions on retired military officers accepting payments or gifts from foreign governments.

Cummings also asked for the release of documents Flynn filed to get a security clearance for his White House job, to examine whether Flynn was candid in response to detailed questions about his contacts with foreign governments.

“I cannot recall any time in our nation’s history when the President selected as his National Security Advisor someone who violated the Constitution by accepting tens of thousands of dollars from an agent of a global adversary that attacked our democracy,” Cummings wrote.

A White House spokeswoman did not immediately respond to a request for comment.

Flynn first acknowledged in a July interview with Yahoo that he had been paid for the RT event in Moscow but said he “didn’t take any money from Russia,” instead indicating that he had received payments from his speakers bureau. He later acknowledged to The Washington Post that RT had paid for the trip. CLICK IMAGE BELOW for link to video. 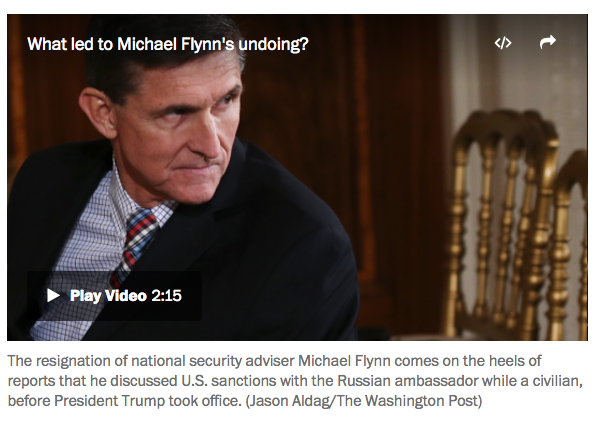 The documents show that representatives for Flynn at the speakers bureau, Leading Authorities, negotiated with RT officials in Moscow regarding the event. They ultimately directed that the bureau be paid $45,386 through its London office. The bureau collected $11,250 while Flynn was paid $33,750 — a fee that was reduced after RT balked at paying Flynn’s original asking price.

“Sorry it took us longer to get back to you but the problem is that the speaking fee is a bit too high and exceeds our budget at the moment,” Alina Mikhaleva, RT’s head of marketing, wrote a Flynn associate about a month before the event. She said that RT hoped Flynn would be “front and central” at a conference associated with the gala “if there is a chance to reconsider the fee.” The emails do not show how much Flynn had originally requested.

In its invitation for Flynn to participate in a panel on “Geo­politics 2015 and Russia’s changing role in the world,” an RT producer wrote that Flynn was being invited because he was “one of the world’s leading voices on national security issues.” She added that the event would provide “exceptional networking opportunities for high-level media and political influencers from Russia and around the world.”

The emails show that in addition to paying for Flynn’s speaking fee, RT paid for business-class travel and accommodations at the luxury Metropol hotel while covering expenses for Flynn’s son, Michael G. Flynn, who served as a chief of staff. After the logistics were nailed down, a staffer for Flynn’s speakers bureau wrote to an RT staffer, “I’m so happy we were able to work everything out and get you exactly what you wanted!”

The U.S. government has said RT, which receives Kremlin funding, is part of a network of propaganda outlets that help popularize a pro-Russian perspective on the news and has issued warning about the network dating to before Flynn entered the private sector. In January, the U.S. intelligence community concluded that RT propaganda played a role in Russia’s effort to influence the U.S. presidential election and help Donald Trump defeat Democrat Hillary Clinton.

In an August interview with The Post, Flynn dismissed concerns about the news network’s Kremlin ties, comparing the network to independent U.S. outlets. “What’s CNN? What’s MSNBC? Come on!” he said.

In recent years, Flynn has advocated for closer ties with Russia to bolster the U.S. coalition to fight Islamist terrorism.

He has suggested other generals have failed to speak out with potentially unpopular opinions because they were afraid to lose out on corporate board seats or other lucrative business opportunities. Others, he said, had used their rank after leaving the military “for themselves, for their businesses.”

Kaspersky Lab makes some of the world’s most popular anti-virus software. The U.S. intelligence community has long suspected that Kaspersky is used by Moscow to assist Russian espionage efforts — a charge Kaspersky has denied. In a twist, though, in December, a top Kaspersky Lab official was arrested by Russian authorities and accused of spying for U.S. companies and intelligence services.

A Kaspersky spokeswoman said in a statement that the company’s U.S. subsidiary paid Flynn to speak at a Washington forum in 2015 that brought together other military, government, technology and policy experts.

“As a private company, Kaspersky Lab has no ties to any government, but the company is proud to collaborate with the authorities of many countries, as well as international law enforcement agencies in the fight against cyber­crime,” she said.

According to Cummings’s letter, Volga-Dnepr was removed from a list of approved U.N. vendors in 2007 following corruption allegations against two Russian officials who steered contracts to the firm.

Colon Miller, who works in the Volga-Dnepr office outside of Houston, said Flynn was paid to speak at an event co-sponsored by the airline’s U.S. affiliate, Volga-Dnepr Unique Air Cargo. The event was titled “Middle East and Africa Logistical and Regional Security Conference.”He said payment was made to the speakers bureau by the Houston-based affiliate of Volga-Dnepr Group, which has offices in Moscow, London and other cities.

Greg Miller contributed to this report.