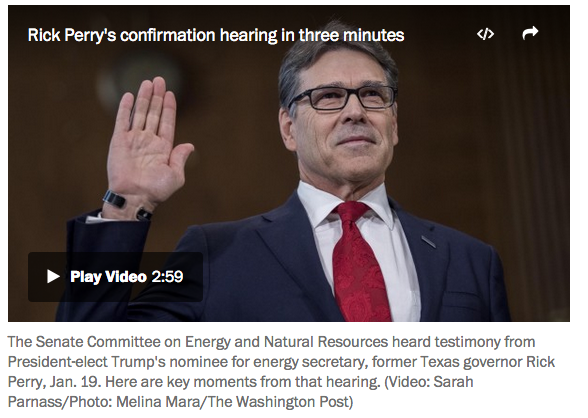 By Steven Mufson and Sean Sullivan January 19 at 1:00 PM

Testifying before the Senate Committee on Energy and Natural Resources, Perry also expressed contrition for campaigning in 2012 on the promise of doing away with the agency.

After addressing the defining moment of his national political career, Perry brought up the politically sensitive topic of climate change, saying he believes the climate is changing and “some of it” is caused by “man-made activity.” He added: “The question is how we address it in a thoughtful way that doesn’t compromise economic growth.” 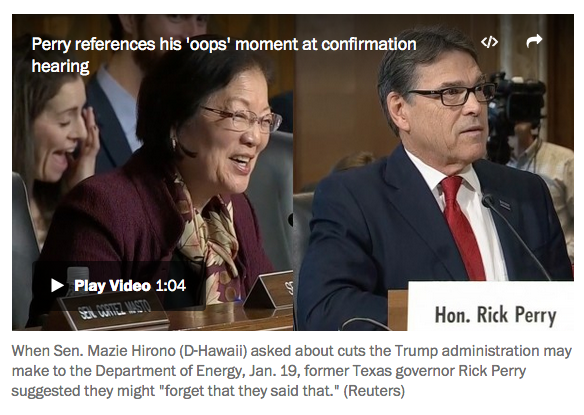 With his acknowledgement of climate change and its causes, Perry went further than Trump did in a television interview broadcast late last year. The president-elect told “Fox News Sunday” in December that “nobody really knows” whether climate change is real.

Perry’s comment today was also at odds with his own earlier public posture. During a 2014 Christian Science Monitor luncheon, Perry said the science showing that humans are contributing to climate change was unsettled and argued that calling carbon dioxide “a pollutant is doing a disservice” to the country.

But throughout the hearing, Perry sidestepped Democrats who sought to pin him down and elicit clear, specific responses to questions about the gravity of the problem. Sen. Bernie Sanders (I-Vt.) repeatedly asked Perry if he agreed that it is a “crisis.” Perry declined to answer directly. “I like getting past the rhetoric,” he said.

Some Democrats on the panel took issue with the way Perry framed the climate issue as being at odds with the economy. Perry responded by pointing to the record in Texas, where the economy grew while the emission of various pollutants fell.

He called the national laboratories the “crown jewel of this country from an intellectual and certainly scientific standpoint.” 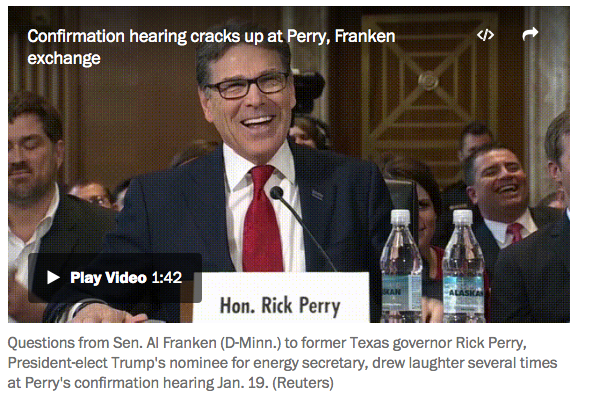 Perry also sought to reassure the Senate panel about the prospect that the Trump transition team would demand the resignation of Lt. Gen. Frank G. Klotz, a political appointee heading the Energy Department’s National Nuclear Security Administration. Perry said he met with Klotz and has asked Trump to leave Klotz in place to assure “continuity in these very important places.”

“Did you enjoy meeting me?” Franken asked.

“I hope you are as much fun on that dais as you were on your couch,” Perry responded. The room erupted in laughter.

“May I rephrase that, sir?” Perry added.

But the mood quickly turned serious when Franken cited Perry writing about a “cooling trend” in his 2010 book and asked him about how much climate change he thinks is due to human activity.

“Far from me to be sitting before you today and claiming to be a climate scientist. I will not do that,” said Perry, dodging the question.

“I don’t think you’re ever going to be a climate scientist. But you’re going to be the head of the Department of Energy,” Franken shot back, before underscoring the consensus among scientists about temperature increases.

Trump’s nomination of Perry marks an unusual turn for the Texas politician.

As Perry bowed out of the presidential campaign in September 2015, the former Texas governor took a not so veiled parting shot at front-runner Donald Trump.

Sixteen months later, Perry has been invited to join the cast of the Trump Cabinet as energy secretary. Perry, once a rising GOP star who crashed miserably in the 2012 presidential campaign, tried to resurrect his political career without success in 2016. An early critic of Trump, whose campaign he called a “barking carnival act,” Perry found no audience. But now, thanks to President-elect Trump, he is suddenly back in the mix.

The Energy Department is an unexpected landing pad for Perry. In the 2012 campaign, Perry said that the agency was one of three departments that should be abolished — though, with a sheepish “Oops,” he famously could not remember its name during a debate. The episode marked the end of that campaign.

Now, Perry needs to figure out how to manage that department. If confirmed by the Senate, Perry would run an agency tasked with monitoring the nation’s nuclear stockpile, cleaning up old nuclear weapons development sites, managing the strategic petroleum reserve, setting appliance standards, managing the national laboratories and overseeing a portfolio of grants, loans and loan guarantees that support research and development on every type of energy.

Many people say that Perry, despite his past vow to dismantle the department, has valuable experience for running it. As governor, he benefited from a rapid expansion of oil and gas exploration in new shale oil and shale gas plays. But he also oversaw an expansion of transmission lines that made way for a rapid expansion of wind energy.

During Perry’s tenure, Texas became the nation’s leading wind energy state. In 2000, Texas wind energy production was 200 megawatts. By the end of 2015, the state had nearly 18,000 megawatts of installed capacity, driven by more than $32 billion of private investment in wind farms.

Perry’s decision to support expansion of the Texas electric transmission lines spurred almost $7 billion in areas such as western Texas.

Environmental groups are less enthusiastic. Perry has sharply criticized Gov. Andrew M. Cuomo (D-N.Y.) for banning hydraulic fracturing, or fracking, to explore for shale oil and shale gas. “I don’t understand why a governor like Governor Cuomo, who is a smart and thoughtful individual, would allow a small group of radical environmentalists to stop job creation and to stop people’s ability to have a better life for themselves,” Perry said in a radio interview with a New York Post columnist.

Though Perry, who served as governor for 14 years, lacks the academic firepower of Massachusetts Institute of Technology physicist Ernest Moniz or Nobel Prize-winning physicist Steven Chu, other energy secretaries have included a U.S. senator, a business woman, a retired admiral and a dentist-turned-politician.

“He’s managed one of the largest economies based on energy in the world,” said Frank Maisano, a public affairs specialist in energy companies at the law firm Bracewell. “He did an effective job of balancing both fossil fuels and the expansion of renewable generation.”

Salo Zelermyer, a senior lawyer at the Energy Department under President George W. Bush, said: “From my perspective, anybody who has served as governor of a state like Texas for the length of time he served speaks to his ability to manage large organizations and to understand the dynamic between the appropriate role of regulation and appropriate role of industry.”

Yet lawmakers highlighted sensitive issues during the hearing. In addition to peppering Perry with questions about climate change and climate research, Democrats also asked how Perry would assure the security of the electricity grid against cyber attacks.

Some environmental groups worry that Perry will try to curb the department’s climate-related research and regulatory activities. President Obama’s two energy secretaries, Chu and Moniz, have both tried to steer the national laboratories toward research on technology that might help avert a climate catastrophe.

Sen. Mazie Hirono (D-Hawaii) asked Perry about cuts to areas of the Energy Department — including its office of energy efficiency and renewable energy — that she has heard might be coming during the new administration.

“Do you support these cuts? Yes or no?” she asked.

“Well senator, maybe they’ll have the same experience as I had and forget they said that,” said Perry, setting off a round of laughter in the room.

“We’re counting on you to educate the incoming president,” responded Hirono.

Perry also assured Sen. Catherine Cortez Masto (D-Nev.) that he would consult with the Nevada congressional delegation and governor over whether to restart work on the Yucca Mountain nuclear waste repository in Nevada that was halted by Obama. The Nevada delegation opposes the project. Perry said that “I’m not going to have a definitive no-way-in-hell answer” but that he would look into alternatives.

He inherits the grant, loan and loan guarantee program that outgoing Secretary Moniz has spread among projects as varied as carbon capture and battery research. Moniz treats it like a research and development fund, but many Republicans have condemned the program as picking winners and losers.

Members of the Senate panel also asked about the slow cleanup of radioactivity at the Hanford, Wash., site where the government produced plutonium for weapons and conducted research for the first nuclear bombs. Perry said he would make sure people in the state of Washington that “it’s not going to be another 30 years of the federal government kicking the can down the road.”