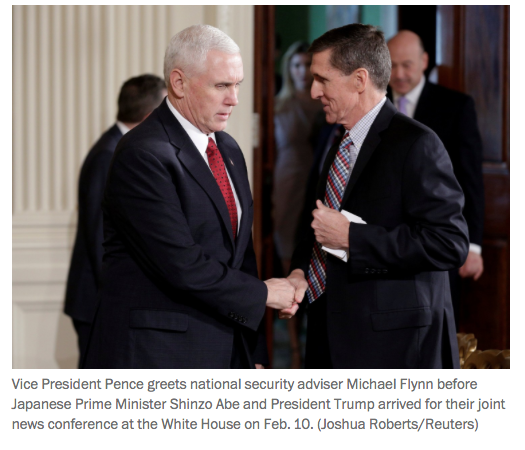 The acting attorney general informed the Trump White House late last month that she believed Michael Flynn had misled senior administration officials about the nature of his communications with the Russian ambassador to the United States, and warned that the national security adviser was potentially vulnerable to Russian blackmail, current and former U.S. officials said.

The message, delivered by Sally Q. Yates and a senior career national security official to the White House counsel, was prompted by concerns that ­Flynn, when asked about his calls and texts with the Russian diplomat, had told Vice ­President-elect Mike Pence and others that he had not discussed the Obama administration sanctions on Russia for its interference in the 2016 election, the officials said. It is unclear what the White House counsel, Donald McGahn, did with the information.

In the waning days of the Obama administration, James R. Clapper Jr., who was the director of national intelligence, and John Brennan, the CIA director at the time, shared Yates’s concerns and concurred with her recommendation to inform the Trump White House. They feared that “Flynn had put himself in a compromising position” and thought that Pence had a right to know that he had been misled, according to one of the officials, who, like others, spoke on the condition of anonymity to discuss intelligence matters.

A senior Trump administration official said that the White House was aware of the matter, adding that “we’ve been working on this for weeks.”

The current and former officials said that although they believed that Pence was misled about the contents of Flynn’s communications with the Russian ambassador, they couldn’t rule out that Flynn was acting with the knowledge of others in the transition. 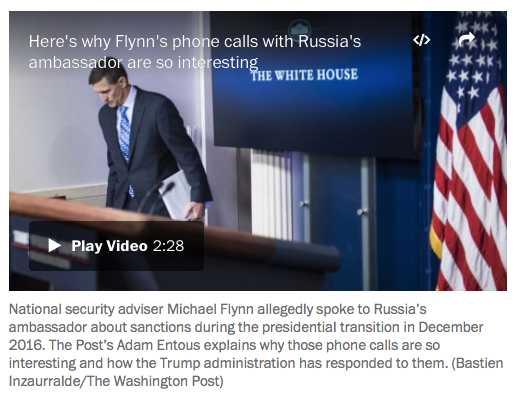 The FBI, Yates, Clapper and Brennan declined to comment on the matter. The White House said in a statement Monday that Trump was “evaluating the situation” regarding Flynn.

In a Feb. 8 interview with The Washington Post, Flynn categorically denied discussing sanctions with Russian Ambassador Sergey Kislyak, repeating public assertions made in January by top Trump officials. One day after the interview, Flynn revised his account, telling The Post through a spokesman that he “couldn’t be certain that the topic never came up.”

Two officials said a main topic of the relevant call was the sanctions. Officials also said there was no evidence that Russia had attempted to exploit the discrepancy between public statements by Trump officials and what Flynn had discussed.

Flynn told The Post earlier this month that he first met Kislyak in 2013, when Flynn was director of the Defense Intelligence Agency and made a trip to Moscow.

Kislyak, in a brief interview with The Post, confirmed having contacts with Flynn before and after the election, but he declined to say what was discussed.

For Yates and other officials, concerns about the communications peaked in the days after the Obama administration on Dec. 29 announced measures to punish Russia for what it said was the Kremlin’s interference in the election to help Trump.

After the sanctions were rolled out, the Obama administration braced itself for the Russian retaliation. To the surprise of many U.S. officials, Russian President Vladimir Putin announced on Dec. 30 that there would be no response. Trump praised the decision on Twitter.

Intelligence analysts began to search for clues that could help explain Putin’s move. The search turned up Kislyak’s communications, which the FBI routinely monitors, and the phone call in question with Flynn, a retired Army lieutenant general with years of intelligence experience.

Yates, then the deputy attorney general, considered Flynn’s comments in the intercepted call to be “highly significant” and “potentially illegal,” according to an official familiar with her thinking.

Yates and other intelligence officials suspected that Flynn could be in violation of an obscure U.S. statute known as the Logan Act, which bars U.S. citizens from interfering in diplomatic disputes with another country.

At the same time, Yates and other law enforcement officials knew there was little chance of bringing against Flynn a case related to the Logan Act, a statute that has never been used in a prosecution. In addition to the legal and political hurdles, Yates and other officials were aware of an FBI investigation looking at possible contacts between Trump associates and Russia, which now included the Flynn-Kislyak communications.

Word of the calls leaked out on Jan. 12 in an op-ed by Post columnist David Ignatius. “What did Flynn say, and did it undercut U.S. sanctions?” Ignatius wrote, citing the Logan Act.

The next day, a Trump transition official told The Post, “I can tell you that during his call, sanctions were not discussed whatsoever.”

White House press secretary Sean Spicer, in a conference call with reporters on Jan. 13, said that the conversation between Flynn and Kislyak had “centered on the logistics” of a post-inauguration call between Trump and Putin. “That was it, plain and simple,” Spicer added.

On Jan. 15, Pence was asked about the phone call during an appearance on CBS’s “Face the Nation.” Citing a conversation he had with Flynn, Pence said the incoming national security adviser and Kislyak “did not discuss anything having to do with the United States’ decision to expel diplomats or impose censure against Russia.”

Before the Pence statement on Jan. 15, top Justice Department and intelligence officials had discussed whether the incoming Trump White House should be notified about the contents of the Flynn-Kislyak communications.

Pence’s statement on CBS made the issue more urgent, current and former officials said, because U.S. intelligence agencies had reason to believe that Russia was aware that Flynn and Kislyak had discussed sanctions in their December call, contrary to public statements.

The internal debate over how to handle the intelligence on Flynn and Kislyak came to a head on Jan. 19, Obama’s last full day in office.

Yates, Clapper and Brennan argued for briefing the incoming administration so the new president could decide how to deal with the matter. The officials discussed options, including telling Pence, the incoming White House counsel, the incoming chief of staff or Trump himself.

Clapper and Brennan left their positions when Trump was sworn in, but Yates stayed on as acting attorney general until Jan. 30, when Trump fired her for refusing to defend his executive order temporarily barring refugees and people from seven majority-Muslim countries — an action that had been challenged in court.

A turning point came after Jan. 23, when Spicer, in his first official press briefing, again was asked about Flynn’s communications with Kislyak. Spicer said that he had talked to Flynn about the issue “again last night.” There was just “one call,” Spicer said. And it covered four subjects: a plane crash that claimed the lives of a Russian military choir; Christmas greetings; Russian-led talks over the Syrian civil war; and the logistics of setting up a call between Putin and Trump. Spicer said that was the extent of the conversation.

Yates again raised the issue with Comey, who now backed away from his opposition to informing the White House. Yates and the senior career national security official spoke to McGahn, the White House counsel, who didn’t respond to a request for comment.

Trump has declined to publicly back his national security adviser since the news broke.

On Monday afternoon, Kellyanne Conway, counselor to the president, said Trump had “full confidence” in Flynn. Minutes later, however, Spicer delivered a contradictory statement to reporters.

“The president is evaluating the situation,” Spicer’s statement read. “He’s speaking to Vice President Pence relative to the conversation the vice president had with Gen. Flynn and also speaking to various other people about what he considers the single most important subject there is: Our national security.”

Karen DeYoung and Greg Miller contributed to this report.