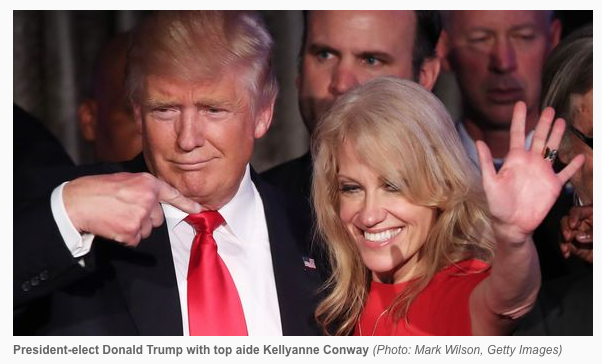 President-elect Donald Trump lashed out on Twitter on Sunday against NBC’s Meet the Press, saying the show edited out nine minutes of a 10-minute interview that host Chuck Todd did with Kellyanne Conway, Trump’s top counselor.

“Kellyanne Conway went to @MeetThePress this morning for an interview with @chucktodd. Dishonest media cut out 9 of her 10 minutes. Terrible!,” Trump tweeted.

Meet the Press tweeted out a link to the full interview with Conway, which Trump then re-tweeted. 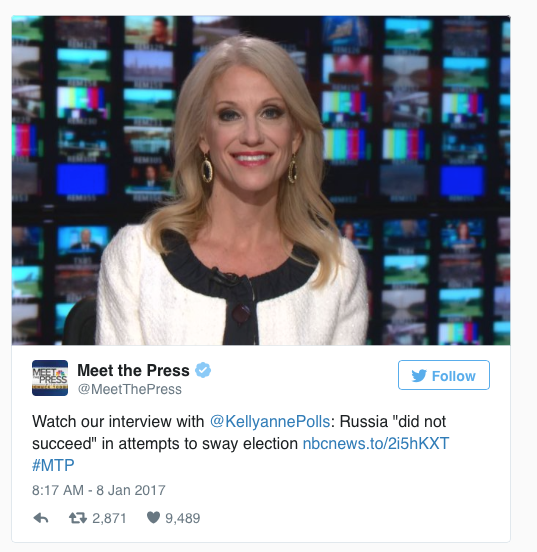 Conway, who served as Trump’s campaign manager before being chosen as his top adviser, appeared on Meet the Press on Sunday morning to discuss Russia’s attempt to interfere with the U.S. presidential campaign by hacking the Democratic National Committee and other political groups.The U.S. intelligence community issued a report Friday concluding that Russians were trying to help Trump and hurt Democrat Hillary Clinton.

Asked if Trump accepts the report’s conclusion Conway said, “Look, we don’t want any foreign government to interfere in the U.S.”

“This man, Donald Trump, ran successfully on America first and he means it in every respect of the term,” she said. “In terms of Russia…they did not succeed in throwing the election to Donald Trump. That’s very clear in this report…There is no evidence that Russia succeeded in any alleged attempt to disrupt our democracy or in fact to influence the election results.”

Conway clashed with Todd when she went on to claim that “respectfully, many in the mainstream media also tried to attempt to influence our election results for Hillary Clinton.”

Todd responded: “Wait a minute, let’s not conflate here the crutch of always trying to attack the media.”

Trump also tweeted Sunday that he was upset that NBC News had a copy of the intelligence community’s report on Russian hacking even before he was briefed on it Friday.