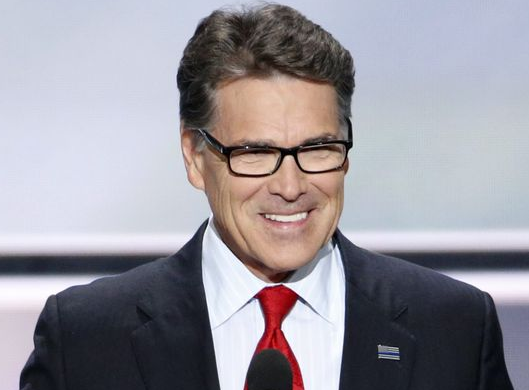 President-elect Donald Trump will nominate former Texas Gov. Rick Perry to serve as secretary of Energy, according to reports by CBS News and NBC News.

On Monday, Perry attended a meeting at Trump Towers but didn’t take questions from reporters.

The Energy Department is the same federal agency Perry wanted to eliminate — and then forgot to name when asked which departments he would shut down.

“I will tell you, it is three agencies of government when I get there that are gone: Commerce, Education, and — what’s the third one there? Let’s see,” Perry said during a Republican presidential primary debate in November 2011.

Former Massachusetts governor Mitt Romney, who became the GOP presidential nominee in 2012, suggested the Environmental Protection Agency as an option.

When pressed by moderator John Harwood to name the third agency, Perry said, “The third one, I can’t. Sorry. Oops.”

Rick Perry, 66, is the longest-serving governor of Texas and a Republican primary presidential candidate in 2012 and 2016. (Photo: SHAWN THEW, epa)

Perry said later in the debate he meant to say Energy, but the gaffe became known as Perry’s “oops” moment.

Perry’s nomination comes despite his ties to the Dakota Access pipeline battle. He sits on the corporate board for Energy Transfer Partners, the parent company of Dakota Access LLC, which is pushing to build the pipeline.

While the Obama administration blocked the Dakota Access Pipeline easement through Lake Oahe, the Trump administration likely would go in a different direction.

The president-elect, who has previously invested in Energy Transfer Partners and supports the pipeline, told Fox News Sunday he would intervene if the conflict isn’t resolved by his inauguration.

USAToday Rick Perry who said he wants to scrap the Energy Department, may lead it added by Peter Lance on December 17, 2016
View all posts by Peter Lance →