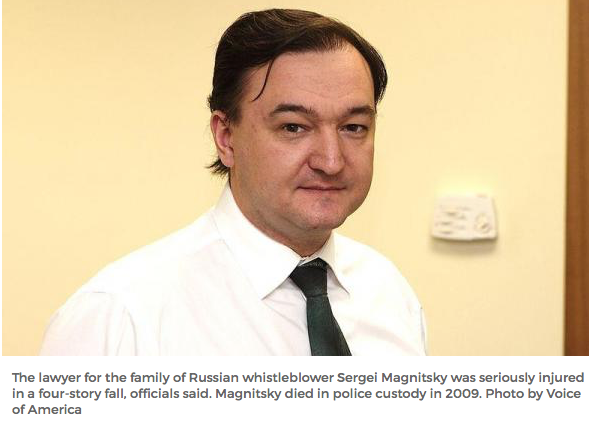 March 22, 2017  The lawyer for the family of Russian whistleblower Sergei Magnitsky was seriously injured in a four-story fall, officials said.

Russia media reported that Nikolai Gorokhov fell when a rope broke as he and several others were attempting to lift a bathtub into his home near Moscow on Tuesday, the BBC reported.

The incident occurred a day before Gorokhov as scheduled to appear in a Moscow appeals court in connection with the Magnitsky case. Magnitsky died in prison in 2009; his family said he was jailed, tortured and denied medical treatment as retribution for accusing law enforcement and tax officials of stealing $230 million in state funds. His death prompted a 2012 law in the United States, allowing sanctions against abusers of human rights in Russia.

Bill Browder, a British businessman and co-founder of investment firm Hermitage Capital Management, who has worked with Gorokhov, said in a statement Tuesday that Gorokhov was “thrown from the fourth floor of his apartment building,” without identifying a source for his allegation.

A medical source said Gorokhov sustained serious injuries and was flown by helicopter to a hospital, the BBC added.