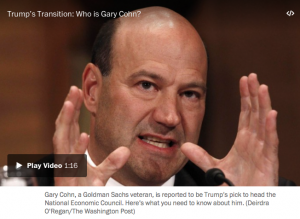 The position, which does not require Senate confirmation, can be as influential as the treasury secretary or other Cabinet posts, and Trump said in a statement that Cohn would be his “top economic adviser.”

“Gary Cohn is going to put his talents as a highly successful businessman to work for the American people,” Trump said in the statement. “He will help craft economic policies that will grow wages for our workers, stop the exodus of jobs overseas and create many great new opportunities for Americans who have been struggling.”

[Swampwatch: The overlap between Trump’s Cabinet and the world of high finance]

In Cohn, Trump once again picked a veteran of Goldman Sachs, which has seen its stock jump about 30 percent since the election. Trump has said he would nominate Steven Mnuchin, a 17-year veteran of the bank, to be treasury secretary, and Stephen K. Bannon, Trump’s chief strategist, worked on mergers and acquisition deals for Goldman Sachs. Hedge fund manger Anthony Scaramucci began his career at the New York bank and has emerged as one of Trump’s closest advisers on his presidential transition.

During more than 25 years as Goldman Sachs, Cohn developed a reputation for a no-holds-barred style. Cohn, the president and chief operating officer of the bank, was poised to become CEO when its current leader, Lloyd Blankfein, retired.

“I share President-elect Trump’s vision of making sure every American worker has a secure place in a thriving economy, and we will be completely committed to building a nation of strength, growth and prosperity,” Cohn said.

[Here’s a look at Trump’s administration so far]

While a registered Democrat, Cohn had been a major donor to both parties and has struck a moderate tone on prominent issues such as corporate tax inversion and deregulation.

At a conference sponsored by the New York Times last year, he argued for keeping U.S. businesses onshore by creating a “really competitive environment.” He also appeared to take a softer stance on Trump’s campaign promises to roll back the sweeping financial reforms known as the Dodd-Frank Act that were instituted under Obama and reinstate a Depression-era law that separated commercial and investment banking.