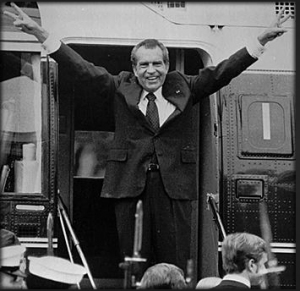 By Peter Lance. December 30th, 2016. HuffPost The man who’ll soon occupy the same Oval Office as the man who once insisted that, “if the President does it, that means it’s not illegal,” ended the year with a message on Twitter proving that he hasn’t changed in two years.

Back then on New Year’s Eve of 2014 even before he’d declared his candidacy Mr. Trump Tweeted, “To EVERYONE, including all haters and losers, HAPPY NEW YEAR. Work hard, be smart and always remember, WINNING TAKES CARE OF EVERYTHING!”

This morning as he prepares for a “big league” New Year’s Eve bash at Mar-a-Lago, he proved that forgive and forget are two words missing from his vocabulary. Choosing his 140 characters carefully he Tweeted “Happy New Year to all, including to my many enemies and those who have fought me and lost so badly they just don’t know what to do,” he ended, as if he really meant it with “Love!”

THE GHOST OF PRESIDENT’S PAST

On September 9th, 1971 Richard Nixon, who ended his presidency with a double handed “victory” salute in the doorway of Marine One as his family and staff stood weeping on the White House lawn, ordered his lawyer John Dean to draft a memo with a list of names designed, according to Dean in his memoirs, to “screw” Nixon’s political enemies, by means of tax audits from the Internal Revenue Service and by manipulating “grant availability, federal contracts, litigation, prosecution, etc.”

Among the 20 names on the original “list,” which was later expanded, were Congressmen John Conyers, columnist Mary McGrory, CBS News correspondent Daniel Schorr, and Paul Newman. The latter two — hard hitting reporter and activist actor later noted that their inclusion on the list was their greatest accomplishment. 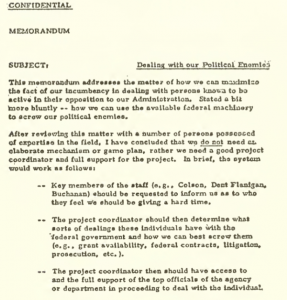 HINTS OF A NEW WAVE OF McCARTHYISM

On December 9th, The Washington Post, the paper that dogged Nixon so tenaciously, reported that the Trump Transition team had compiled a list of 74 questions so that Energy Department officials might “out” career employees and contractors who supported the Obama administration’s efforts to fight climate change.

Specifically as noted in the piece, “The questionnaire requests a list of those individuals who have taken part in international climate talks over the past five years and ‘which programs within DOE are essential to meeting the goals of President Obama’s Climate Action Plan.’”

The President-elect has repeatedly called climate change a “hoax,” perpetrated among other nations, by China.

But the Obama Department of Energy was quick to push back:

The last sentence of that emailed statement from DOE Spokesman Eben Burnham-Snyder, was in boldface for emphasis.

But the fact that Rick Perry, Trump’s choice for DOE secretary,  forgot got the name of the Department that he may soon run (after suggesting that it should be abolished) and the appointment of fossil fuel advocate and climate change doubter Scott Pruitt to run the EPA, suggests that the President-elect will merely bide his time before he gets a chance to commence the purges.

FROM RUSSIA WITH LOVE

The use of that decidedly Moscow Centre term for “house cleaning” is appropriate when you simply connect the few dots that explain Trump’s affection for the ex-KGB head and the man John McCain called a “thug” and a “killer,” Vladamir Putin.

Those pundits still scratching their heads to understand the motivation behind Putin using hackers to hand Trump the presidency need look no further than ExxonMobile CEO and Secretary of State designee Rex Tillerson whom Putin gifted with the rare Russian Order of Friendship. 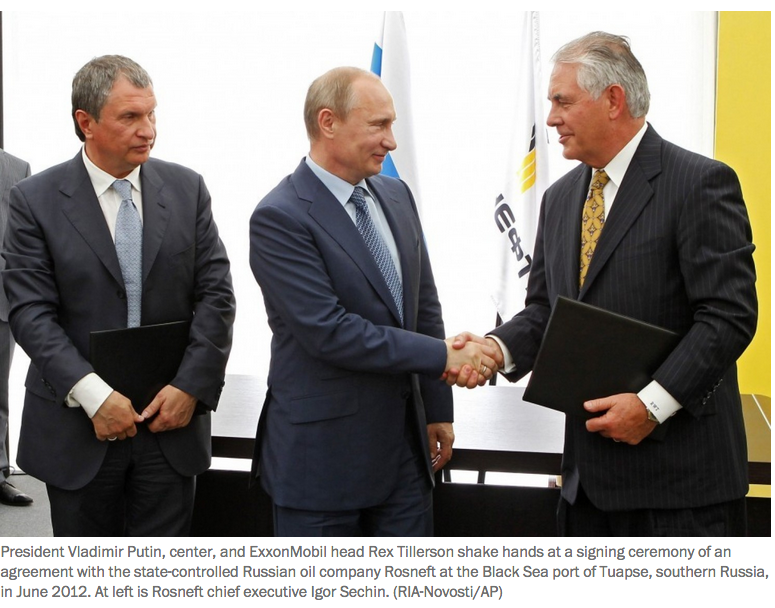 The sanctions slapped on Russia following its annexation of Crimea tanked (to use an Exxon Valdez metaphor) the $723 million joint venture between Tillerson’s company and Rosneft, the Russian/Putin state-owned oil conglom, to drill for crude in the Arctic Circle’s Kara Sea — a loss estimated by Exxon itself  at upwards of $1 billion.

That deal could be reset (to use a Hillary Clinton metaphor) with the stroke of a pen on January 20th after Mr. Trump takes command. And that could mean a payday for Tillerson of exponential proportions, given his ExxonMobile stock and options.

WAS IT A QUID PRO QUO?

Will Donald Trump’s treasure chest get fatter on Inauguration morning on the strength of that single deal alone? We can’t say for sure at this point, because he’s kept his tax returns secret and we don’t know how much ExMo stock he’s holding (or not) or how much of it might have been promised to him (if any) and we’re unlikely to know that because he’ll soon control Treasury and thus the IRS, not to mention Energy and Justice.

The GOP controls both Houses of Congress and there’s little chance that the “oversight” committees on either side of the Capitol will jump into the breach.

So it’s understandable why Vladamir Putin must have been tossing down the vodka shots yesterday when he outflanked Barack Obama on the Global chessboard, not once but twice.

First by making it appear that the current President’s feckless policy on Syria (as Mike Pence would call it) had cut the U.S. out of the cease-fire talks, when it’s clear that by propping up Bashar al-Assad, the Russians and Iranians have handed him a victory, even if it meant turning Aleppo into the Dresden of 2016.

In short, Vlad looks like a peacemaker when he’s merely overseeing what amounts to a Carthaginian victory over the anti-Assad rebels.

His next move was to appear to be magnanimous. He not only refused to (openly) retaliate against Obama’s ouster this week of Russian diplomats, but he went so far as to invite the children of U.S. officials in Moscow to a Christmas/New Year’s party at the Kremlin.

That chess play provoked this love Tweet from the President-Elect: “Great Move on delay (by V. Putin) – I always knew he was very smart!”

Now, in addition to whatever “enemies list” he’s compiling, between his cabinet and WH picks – pregnant with enough generals to constitute a junta in most Third World countries – and billionaires so rich that collectively 17 of the cabinet-level choices have more dough than 1/3 of U.S. Households combined — Donald Trump has a new list of “friends,” who, given their economic and political priorities and his staggering conflicts-of-interest, will almost assuredly make him richer.

How long will this new plutocracy last? My guess is at least through the 2018 elections. If Mr. Trump fails to deliver his white blue collar base the jobs they deserve and if he doesn’t completely divest his holdings, the Dems will likely regain control of the Senate and they’ll have the juice to begin the kind of hearings Hillary faced over her email server and Benghazi.

At that point I predict that Donald Trump will cash out with at least as much money as he’s told the American voters he has right now. When and if that happens he’ll have pulled off the greatest game of three-card monty in world history.

The conventional bribery made famous by Democratic ward heelers in big cities from Chicago to Philly — those envelopes full of cash passed to elected officials by “bag men” — will  pale in comparison to the level of profiteering we’re about to witness.

I hope I’m wrong. But the genius of all great con-men is to tell you just enough of the truth that you’ll believe them. And day by day, appointment by appointment, Tweet by Tweet, Donald J. Trump is showing his cards. @PETERLANCE_  peterlance.com