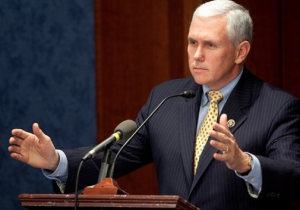 Indiana Gov. Mike Pence’s (R) library from his 12 years in Congress is sealed until 2022 or his death — whichever comes later.

Pence is believed to be on Donald Trump‘s shortlist of potential vice presidential candidates.

His congressional library, housed at Indiana University in Bloomington, is closed until either Dec. 5, 2022, or Pence’s death.

“It’s not standard, but it’s not unusual,”  Dina Kellams, the school’s director of university archives, told The Huffington Post.

The website noted that former Sen. Richard Lugar (R-Ind.) put similar restrictions on his own congressional papers before opening up some parts of his archives.

Kellams said Pence could open up his library if he chooses.

Pence met with the presumptive Republican nominee and his children Wednesday in Indiana as the businessman inches toward naming a running mate. Trump is expected to pick his VP by the end of the week.

Trump on Tuesday hinted that Pence would be his pick during a rally in Indiana.

“You’re gonna call him … and you’re gonna say governor — or vice president — we’re winning too much!” Trump said when talking about Pence.