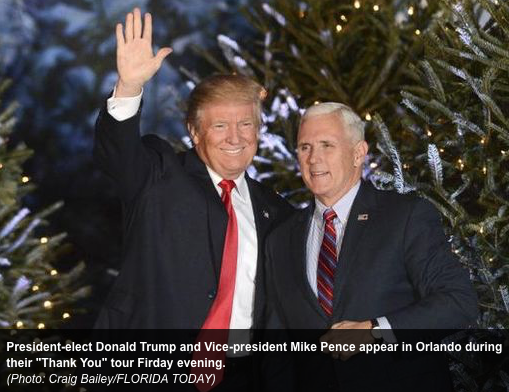 Donald Trump recounted his Election Day victory for a large crowd in Florida Friday night, mocking the media for its Nov. 8 coverage.

Trump has been detailing his wins state by state as he travels around the country on his “thank you” tour, which he continued in Orlando.

On Friday he delivered a particularly colorful retelling of how election night progressed, mocking the media for predicting a win for Hillary Clinton.

As Trump, flanked by nearly 20 Christmas trees, went through the timeline of him winning several states early on in the night, the president-elect said the media were in a “state of panic.”

“Now they’re getting nervous on television, and you see these anchors they’re like sweating and crying and throwing up all over the place,” Trump said, claiming that John King’s hand was beginning to shake as he updated CNN’s election night map. “All those months he’s saying there is no path to 270 for Donald Trump.”

Trump also blasted exit polling, which he said made his team think for several hours that they were likely to lose, and chided the media’s timing on calling his win in various states. He claimed that news outlets waited several hours to call certain states like Pennsylvania “for commercials.” News outlets like the Associated Press calculate when to name a winner based on vote totals and on-the-ground data.

Trump, dropping his voice to mock a news anchor, said: “‘We have bad news, ladies and gentlemen, Donald Trump—’ and now the guy’s getting sick, he’s ready to throw up all over.”

Trump celebrated the fact that he “shattered the hell out of” the “blue wall” that the Clinton campaign and many pundits predicted would bolster her victory.

“He’s up with the red [map], and he’s going and his hands start to shake, and he’s gasping for breath, he can’t breathe, he’s choking like a dog,” Trump said, narrating election night coverage as he continued to pick up key states. “And for months he’s been saying I have no path to victory and you know, the bad news is a lot of people probably believed him and they didn’t go out to vote. It’s called suppressing the vote.”

At another point in the rally, Trump proposed moving the press pen to the back of the arena, to which supporters began chanting “move them back!”

Trump has had a contentious relationship with the press throughout his campaign, frequently accusing news outlets of being dishonest” and targeting certain organizations and journalists.