The New Yorker: THE DEEP DENIALISM OF DONALD TRUMP 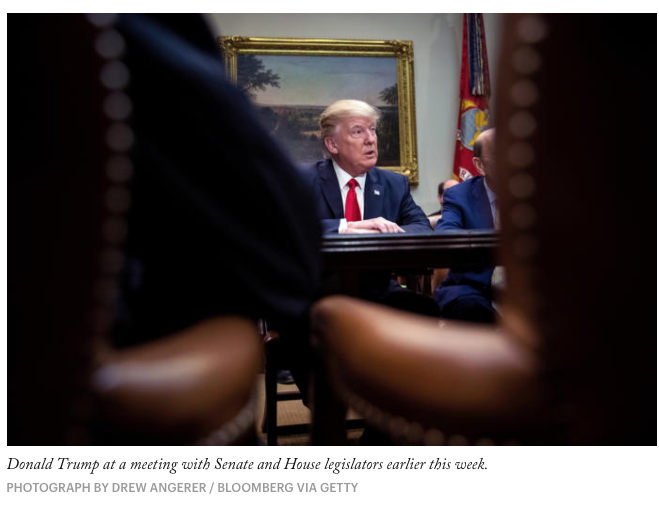 Donald Trump is hardly the first President to lie to the American people. Nor is he the first to place ideology before data. But this White House, unlike any other, has already crossed the threshold into a space where facts appear to mean nothing.

Eventually, the President’s daily policy outrages, his caustic insults, and his childish Twitter rants will fade into history. But it will take years to gauge the impact of having a habitual liar as President. When words like “science” and “progress” become unmoored from their meaning, the effects are incalculable. And let’s not kid ourselves: those words today are under assault with a ferocity we have not seen for hundreds of years.

The United States is now a country with dozens of unofficial government “resistance” Twitter accounts. There is one for the National Aeronautics and Space Administration, another for the Environmental Protection Agency, and others for the National Park Service, the Peace Corps, and the Customs Agency. Last week, in what the account describes as an effort to present “actual facts, instead of alternative facts,’’ they were joined by the nation’s most important public-health agency, the Centers for Disease Control and Prevention.

There are horrific lies of omission: last week, the White House released a statement on International Holocaust Remembrance Day that pointedly declined to refer to Jews, because others were killed, too. And there are denials of truth that are impossible to categorize: the President met with Robert F. Kennedy, Jr., an anti-vaccine zealot with a history of falsehoods, and talked to him about possibly forming a commission on vaccine safety. (After Kennedy said he’d actually been asked to lead such a commission, provoking dismay, the Trump team said that no decision had yet been made.) Then there are lies so ludicrous that it is hard (though essential) to take them seriously: according to Trump, the United States has just gone through the most devastating instance of voter fraud in the nation’s history. And, in his telling, every one of the millions of illegal votes happened to be cast for his opponent.

What happens to a society that accepts denialism as a way of life? Nearly a decade ago, I published a book about the growing number of people who, when confronted with an unpleasant reality, chose to embrace a more comfortable lie. Denialism—whether it stems from suspicions about vaccines, dread of G.M.O.s, or even confusion about climate science—is often rooted in fear. And fear deserves to be taken seriously. The longer I have been involved in these issues, the more sympathy I have for people who are dubious about the rules of organized medicine, worried about the health of their infant children, or skeptical about the interests of the corporations that make so many of our seeds, food, and pharmaceuticals. Reason, patience, and education don’t always work. But they go further in confronting those fears than self-satisfied condescension.

But we are now led, in an age of unimaginable scientific achievement, by the most narcissistic and thoughtless denialist ever to have entered public life. His denialism is not based in fear, it’s based in arrogance. And it must not be forgotten that denialism kills. Climate change, which Trump has denied and dismissed, has already had a grave impact on the world’s poorest people. Far from making America safer, Trump’s immigration plan will cause clear harm, not least to American soldiers.

Politics doesn’t belong in a test tube; neither viruses nor bacteria are members of political parties. Scientists have often been wrong, but nothing has propelled our world forward more successfully or rapidly than the scientific method, based as it is on independent inquiry and a reliance on data that can be observed, tested, analyzed, and repeated.

That essential modern project—one of passionate inquiry and personal detachment—is now in doubt. “Scientists have battled the political and ideological forces against concepts such as evolution and climate change for years,’’ Elizabeth Hadly, a professor of biology, geological, and environmental sciences at Stanford University, told the Guardian this week. “We have patiently articulated the physical and biological laws governing the universe, assembled the data, and presented it in the pages of journals, at public seminars, to the halls of Congress. What is occurring now against science and scientists in the U.S. goes beyond ideology and political party. Now we ﬁnd our discourse under attack.”

How many of our country’s schoolteachers must consider, every day, whether to explain to their students that the President is a liar? The alternative—simply accepting those lies—would be devastating. It would change our language and change us, if we let it. On April 22nd, Earth Day, scientists will march on Washington to show their fealty to facts. There are people, in science and out of it, who are opposed to the idea of theoretically detached researchers showing themselves to be political in this way. They might better ask in what world would Americans have to stage a march to honor reality. Unfortunately, that world is now upon us. Facts deserve our support. And lies do not.

Michael Specter has been a staff writer at The New Yorker since 1998, and has written frequently about AIDS, T.B., and malaria in the developing world, as well as about agricultural biotechnology, avian influenza, the world’s diminishing freshwater resources, and synthetic biology.