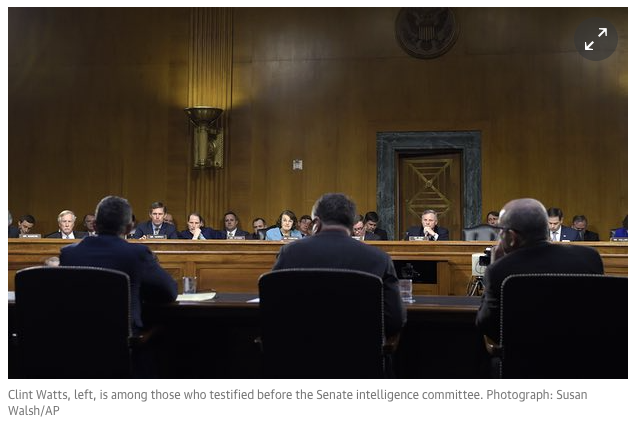 Donald Trump’s willingness to embrace Russian disinformation was one of the reasons Russia’s interference in the 2016 election worked, the Senate panel investigating the president’s alleged ties to the country heard on Thursday.

Decades of Russian covert attempts to undermine confidence in western institutions, including planting or promoting false news stories or spreading doubt about the integrity of elections, will accelerate in the future unless the US confronts so-called “active measures”, several experts testified to the Senate intelligence committee.

“Part of the reason active measures have worked in this US election is because the commander-in-chief has used Russian active measures at time [sic] against his opponents,” said Clint Watts of George Washington University’s Center for Cyber and Homeland Security.

Those active measures have migrated online with alacrity in recent years. Watts, a former FBI special agent and army officer who came under personal siege from Russian-backed hackers, told the panel’s first public hearing that social media accounts associated with spreading pro-Russian fake news were visible as far back as 2009.

The expert added that Russia possessed unreleased hacked information on thousands of Americans it could “weaponize” to discredit inconvenient sources. Those and other measures provided Russia with an inexpensive tool to check its wealthier adversaries in the US and Nato, several scholars and former US officials assessed.

When asked why the Russian president, Vladimir Putin, felt the 2016 US election provided the Kremlin an opportunity to intervene – the consensus position of US intelligence agencies – Watts pointed to Trump.

Wittingly or not, Trump and his former campaign chairman, Paul Manafort, embraced and promoted narratives, including false ones, convenient to Russian interests, including a fake story about a terrorist attack on the Turkish airbase at Incirlik used by US forces and baselessly doubting the US citizenships of Barack Obama and Ted Cruz.

“On 11 October, President Trump stood on stage and cited what appears to be a fake news story from [the Russian propaganda outlet] Sputnik News that disappeared from the internet. He denies the intel from the United States about Russia. He claimed that the election could be rigged – that was the number one theme pushed by RT, Sputnik News,” Watts testified.

The first public hearing by the Senate intelligence committee into its Trump-Russia investigation featured none of the partisan rancor that has defined its counterpart in the House of Representatives.

The Republican chairman, Richard Burr of North Carolina, himself a Trump ally during the campaign, pledged a “thorough, independent and non-partisan review” of evidence potentially tying Trump to Russia, a commitment echoed by the top panel Democrat, Mark Warner of Virginia.

“If we politicize this process, our efforts will likely fail,” Burr said at the outset of the hearing.

The House of Representatives’ inquiry has taken a back seat to the public drama surrounding its leader, the California Republican Devin Nunes. Nunes is under Democratic pressure to recuse himself after his promotion of information provided to him at the White House and cancellations of public hearings prompted allegations of covering up for Trump. The New York Times on Thursday reportedThe New York Times on Thursday reported that two White House staffers aided Nunes’s effort last week, Ezra Cohen-Watnick of the National Security Council and Michael Ellis, an attorney who formerly worked on Nunes’s committee.

Nunes’s spokesman, Jack Langer, said: “As he’s stated many times, Chairman Nunes will not confirm or deny speculation about his source’s identity, and he will not respond to speculation from anonymous sources.”

The Senate’s hearings have not yet featured key testimony from serving intelligence and law enforcement officials, so they have not yet encountered the same high-stakes pressure as the House’s, which last week saw the leadership of the FBI and NSA publicly reject Trump’s evidence-free allegation that Obama placed him under surveillance.

But in what Burr and Warner promoted on Wednesday as a sign of their seriousness, Burr assigned seven committee staffers to the inquiry. That would be more than Burr’s predecessor, the California Democrat Dianne Feinstein, had on the vast review of CIA torture, though that inquiry quickly lost GOP support.

Urging a response to Russian interference in the election, Watts said the US approach to Russia was provocatively ambiguous.

“I’m not sure what our policy or stance is with regards to Russia at this point in the United States. I think that’s the number one thing we’ve got to figure out, because that will shape how they interface with us,” he told senators.