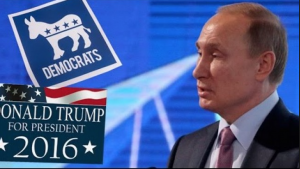 Calling the allegations of Russian meddling “disturbing,” McConnell said Monday the intelligence panel should take the lead, dismissing calls by Sen. John McCain (R-Ariz.) and others for a special select committee to review the matter.

The Kentucky Republican said the Intelligence Committee is “more than capable of conducting a complete review of this matter.”

“We’re going to follow the regular order. It’s an important subject and we intend to review it on a bipartisan basis,” he said when asked specifically if he would support a special bipartisan commission.

McConnell noted that he sits on the panel as an ex-officio member and that incoming Senate Democratic Leader Charles Schumer (N.Y.) will soon join it in the same capacity.

Schumer joined McCain and two other bipartisan lawmakers on a Sunday letter calling for an investigation spanning “across the jurisdictional lines of Congress.”

McCain, a leading Senate voice on national security and the threat posed by Russia, also called Sunday for a special committee to delve into the issue.

“I would like, in an ideal world, to have a select committee,” he CBS’s “Face the Nation,” explaining the leaders of the Senate Intelligence, Foreign Relations and Armed Services panels should play a role.

McConnell noted that McCain will be conducting his own review of cybersecurity threats facing the nation as chairman of the Armed Services Committee.

“Sen. McCain and Sen. Burr will both be looking at this issue and doing it on a bipartisan basis,” he said, referring to Senate Intelligence Committee Chairman Richard Burr (R-N.C.).

McConnell made clear views Russian President Vladimir Putin as more of an adversary than a friend.

“The Russians are not our friends. They invaded Crimea,” he said, noting that a group of senators this past week met with a delegation from Baltic counties.

“To say that they’re nervous about the Russians is to put it mildly,” he said.

“We ought to approach all of these issues on the assumption that the Russians do not wish us well,” he added.

He declined, however, to comment on the possible appointment of ExxonMobile CEO Rex Tillerson, who has close ties with Putin, to serve as Secretary of State.

He said he’s “been very impressed with nominations,” adding, “we’ll have to see who’s nominated as Secretary of State.”

“Let’s wait until we get nominees,” he said. “I don’t want to comment on kind of a phantom nominee today.”

While he strongly condemns allegations that Russia may have breached U.S. “cybersecurity measures,” the majority leader said leaked characterizations of the motivation behind Russian hacking should be weighed carefully, suggesting a possible partisan lens.

He noted that prior to the election, the director of National Intelligence released a statement about hacking activities directed by the Russian government, but cautioned any leaks about U.S. intelligence findings “is irresponsible, likely illegally and potentially for partisan political gain.”

Jason Miller, a spokesman for President-elect Donald Trump, said he was unsure of the last time Trump and McConnell spoke, but dismissed efforts to investigate Russian interference in the election as coming from “people who are bitter their candidate lost.”

“This overall narrative, this is clearly an attempt to delegitimize Trump’s win,” Miller said Monday. “That’s what’s going on here. First there was the recount nonsense, then the discussion of the popular vote, now it’s anonymous sources with conflicting information trying to raise other issues.”

Trump has dismissed the CIA report, calling it “ridiculous” on Sunday and following up Monday on Twitter.

“Can you imagine if the election results were the opposite and WE tried to play the Russia/CIA card,” Trump tweeted Monday.

“It would be called conspiracy theory!”