Salt Lake Trib: Utahns drown out Chaffetz with demand to ‘explain yourself’ at tense town hall 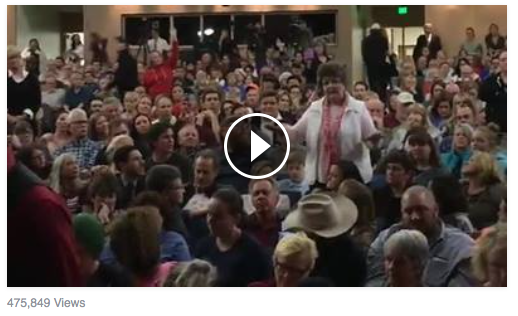 Rep. Jason Chaffetz tried to respond to questions, but many of his answers went unheard. The din of the hostile and harassing audience that filled the 1,000 seats of a high school auditorium Thursday night drowned him out.

“Explain yourself,” they roared over him.

When the congressman did get a chance to speak, the crowd often didn’t like what he had to say. And he knew it.

The town-hall meeting was 75 minutes of tense exchanges between Chaffetz and residents from across the state. They were frustrated by the Utah Republican’s refusal to investigate President Donald Trump’s potential conflicts of interest. They doggedly pursued him for his initiatives to transfer or sell public lands. They questioned his position on immigration and refugees.

And that was only half of the largely liberal crowd.

About 1,500 people stood outside Brighton High School, too far back to make the cut, their signs reading, “Do your job” and “America is better than this.”

One man shouted: “If there’s somebody in there from another district, kick them out.” Several tried to rush the doors, but a line of officers pushed back. Abigail Hawkins, from Cedar Hills, got to the school at 6:15 p.m. and lamented that “they knew … and yet they didn’t move it to a bigger venue.”

“This feels very limited and exclusive,” she said, joining a chant of “Bring him out.”

In the auditorium, at least 20 seats were empty. A fire marshal opened the event by noting that those would not be filled “because of the situation outside.” Chaffetz heard the announcement and paced across the bare stage, acknowledging the lack of space and holding the microphone at his side when the noise got to be too much.

“If you want me to answer the question, give me more than five seconds to do it,” he said, urging attendees to quiet down.

The congressman addressed 13 questions, three focused on public lands and four on investigating Trump. The other subjects jumped from Planned Parenthood to air quality to Education Secretary Betsy DeVos.

Noor Ul-Hasan, a Democratic activist, said, “If you want to continue to look into Hillary Clinton, I don’t care. But why aren’t you checking out your own president?”

Chaffetz, chairman of the House Oversight Committee, said he’s looking into comments made by Kellyanne Conway, a counselor to Trump, who plugged Ivanka Trump’s fashion line in a national television interview.

“There’s no case to be made that we went soft on the White House,” Chaffetz said as police nervously patrolled the perimeter of the room. “In terms of doing my job, that’s what I’m supposed to be doing.”

Melissa Batka Thomas, from Salt Lake City, steadied her shaking hands as she read a quote from Chaffetz in which he called on presidential candidates to release their tax returns and “show everything.”

“I’m asking you to explain what your timeline is to uphold your word or why there is a reluctance to do so,” she said.

The congressman said, as he has before, that the president is “exempt” from conflict of interest laws. “Until there is evidence that [Trump] has somehow overused that to ingratiate his family …” Chaffetz said before boos cut him off.

Salt Lake Trib: Utahns drown out Chaffetz with demand to ‘explain yourself’ at tense town hall added by Peter Lance on February 10, 2017
View all posts by Peter Lance →