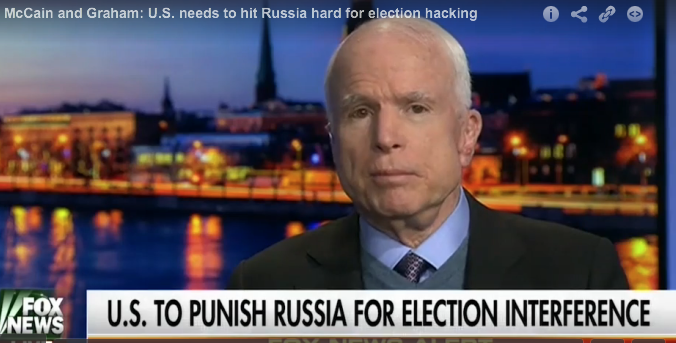 Republican Sens. John McCain and Lindsey Graham called Wednesday for Congress to take a tougher stance against Russia for meddling in the U.S. presidential election.

In an interview on Fox News from Latvia, where he and Graham were touring the Baltic states, McCain said legislators should “increase the sanctions on Russia for this misbehavior” and urged a permanent American military presence in the Baltic states, as well as arming Ukraine with weapons.

Graham echoed those statements, saying that for President Barack Obama to take action now would do little good and that “you need to hit Russia in a sustained fashion.”

McCain said the issue is “of the utmost seriousness.”“Let the new Congress and the new president deal with Russia, pass new sanctions, much tougher than the ones we already have,” Graham said, arguing that Obama acting on his way out of office would “send the wrong signal.”

“Look, if you’re able to change the results of an election, then you have undermined the very fundamentals of democracy,” McCain said, adding that he doesn’t, however, believe the Russian hacking affected the election result.

The Arizona senator said America is still the strongest nation in the world but it needs to prove it and not let Russian President Vladimir Putin undermine the “new world order” that’s been in place for the 70 years since World War II.

“Vladimir Putin is a thug and a bully and a murderer,” McCain said. “He understands strength, and that’s all that he understands.”

Graham predicted there will be a bipartisan vote in Congress early next year over the Russian hacking and that new sanctions will be imposed on the country “for interfering in our elections and trying to interfere in democratic elections all over the world, including in the Baltics.”

“These are wonderful little countries,” McCain said, and “they need American presence and American support.”