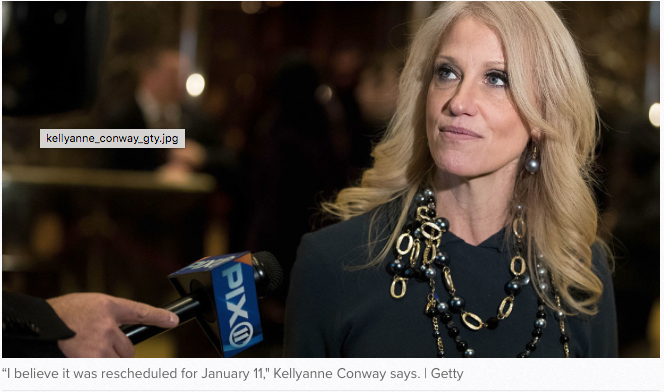 President-elect Donald Trump’s promised press conference to address potential conflicts of interest between his business empire and his incoming administration is scheduled to occur in the middle of next week, a senior adviser to his transition team said Monday night.

Kellyanne Conway, who took over as Trump’s campaign manager over the summer and will serve as counselor to the president in the incoming administration, said the press conference will be held Jan. 11, although she left the door open for it to be pushed back. Trump had initially promised to hold the press conference on Dec. 15.

“I believe it was rescheduled for January 11, originally, and if the lawyers and the compliance officers feel like we’re ready, then we’ll stick to that date. It’s really up to them,” Conway said Monday night on CNN’s “Anderson Cooper 360.” “But I know that I spoke to the president-elect today about press conference and I know that’s the current plan. So that’s next week.”

Trump’s massive business empire, which includes substantial international real estate holdings, present an unprecedented challenge to the norms of White House ethics. Presidents have historically placed their assets in a blind trust that theoretically ensures decisions are made in the interests of the nation and not for the financial benefit of the first family.

Trump has yet to fully flesh out how he will separate himself from his businesses, but has said that he will hand control of them to his two adults sons, both of whom are already executives at the company. The president-elect has not committed to divesting himself completely from his business holdings, and such an arrangement would fall short of the blind trust threshold.

Conway also backed her boss away from a promise he made on New Year’s Eve, when he told his traveling pool of reporters that “I also know things that other people don’t know” regarding cyberattacks against U.S. political targets that the U.S. intelligence community have attributed to the Russian government. Trump has been unwilling to concede that assessment and told reporters that “you’ll find out on Tuesday or Wednesday” what information he has that nobody else does.

“He didn’t say, he didn’t necessarily say he’d announce it. What he’s saying is that we’ll find out, he’ll find out. I think it’s all very contingent on what these intelligence officials reveal in their briefing, Anderson, and everybody should be very happy that the president-elect is open to receiving that briefing. He’s very much looking forward to that,” Conway told Cooper.