NYT: Trump’s Pick for Health Secretary Under Scrutiny for Investments 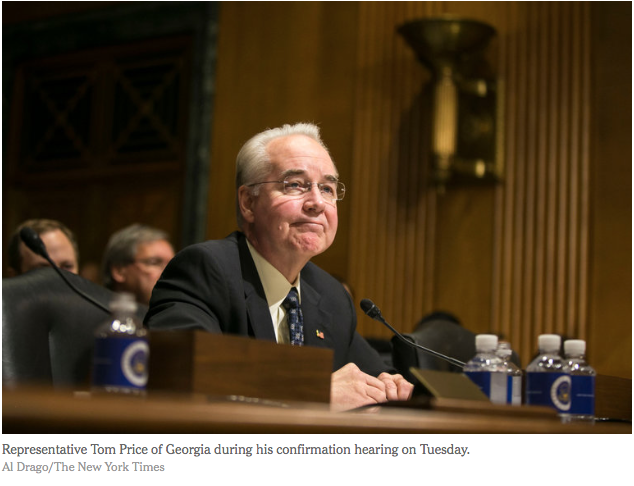 Representative Tom Price of Georgia, President Trump’s choice for secretary of Health and Human Services, has been assailed by Democrats in recent weeks over his investment in health care companies at the same time that he pushed legislation that could have benefited those businesses.

Democrats have called for investigations by the Securities and Exchange Commission, as well as the House’s Office of Congressional Ethics, into whether Mr. Price violated insider trading laws or conflict of interest rules. He has said he did nothing wrong.

As Mr. Price awaits a confirmation vote, which could come next week, here is what we know about his investments, and whether his activities could have broken any laws or ethics rules.

Which of Mr. Price’s stock holdings have come under scrutiny?

Mr. Price, an orthopedic surgeon by training, has invested more than $300,000 in health care stocks — as varied as big drug companies like Pfizer and Eli Lilly and health insurers like Aetna — in recent years. During that time, he has been active in shaping health care legislation as a member of the House Ways and Means Committee’s subcommittee on health.

In one example, Mr. Price bought stock in Zimmer Biomet, a company that makes orthopedic implants, shortly before he introduced legislation that could have protected the company from financial losses because of new federal regulation.

His investment in a tiny Australian company, Innate Immunotherapeutics, was singled out for scrutiny, especially his participation in an offering of discounted stock that was limited to “sophisticated U.S. investors.” Mr. Price has said he learned of the company from Representative Chris Collins, Republican of New York, and Mr. Trump’s congressional liaison during the presidential transition. Mr. Collins serves on the company’s board of directors and is its top shareholder.

While Mr. Price has said nearly all of his trades were made by a broker and that he did not tell her what to invest, he said he personally chose to invest in Innate. Representatives for Mr. Price have said that he set up a separate account to invest in the company, since his existing accounts did not permit the trading of penny stocks, which the company was at the time he invested.

Why are senators calling for an investigation?

Democrats have called for an investigation into whether Mr. Price violated what is known as the Stock Act, which bans members of Congress from insider trading.

They are also asking for an inquiry into the involvement of Mr. Price and Mr. Collins in Innate, which has said that it plans to pursue approval with the Food and Drug Administration for a drug it is developing to treat multiple sclerosis. Democrats say they want to know whether Mr. Collins shared with Mr. Price any nonpublic, material information that led him to invest.

Senators have also raised questions about the special stock offering, known as a private placement. Many of the participants were in Mr. Collins’s social and professional circles.

What are the chances that Mr. Price violated insider trading laws?

Experts in insider trading and legal ethics said that they had not seen evidence that any laws were broken but more information was needed before they could make a final judgment.

The S.E.C. typically focuses on the timing of trades and the communication between the parties.

Insider traders often take advantage of a sharp spike in a stock price, followed by at least one of the parties selling their investment to profit. There is no evidence that this occurred here, said Donald C. Langevoort, a professor at Georgetown University Law Center. In the case of Innate Immunotherapeutics, the stock has risen steadily since Mr. Price last invested over the summer, and shares jumped in the past month in the wake of media reports about his involvement.

The recent stock rise prompted the Australian stock exchange this week to ask Innate to explain why its share price had risen so sharply, to $1.83 on Jan. 25, from 83 Australian cents in late December. The company responded that the recent news reports caused the price to rise.

Others said the act of merely introducing legislation — which is far from a guarantee that it will pass — is unlikely to move a company’s stock significantly.

“I don’t think you’re going to get rich trading on the market impact of an announcement that you introduced legislation,” said Jill E. Fisch, a professor of law at the University of Pennsylvania Law School.

Still, some said the questions about Mr. Price’s trades show why members of Congress should not invest in stocks in the first place. As Republicans have noted, some Democrats on the committees that are vetting Mr. Price, including Sheldon Whitehouse of Rhode Island, also trade in health care stocks.

“How can the public have confidence in the integrity of legislation if the person introducing it has invested in a company that would benefit?” said Stephen Gillers, a professor of legal ethics at the New York University School of Law.

What is the deal with that “private placement”?

Experts said private placements, such as the one Mr. Price took part in, are commonplace. The companies offer the stock at a discount to entice investors to participate, and can be targeted to small groups of people — even to a single investor, as was the case in 2008, when Goldman Sachs arranged a private placement with Warren Buffett.

Participation in a private placement may raise questions about exclusive access, but it is unlikely for such an offering to lead to insider trading. That is because in private placements, it is the company that is selling the stock. A person with insider knowledge, therefore, would not be able to defraud the company, which presumably has access to the same nonpublic information.

But Mr. Langevoort said private placements can raise questions if the placement is offered at a steep discount to a public official, and if the offering was intended to influence that person. “It doesn’t mean that they don’t have issues, it’s just that the issues are different,” he said, while noting there is no evidence that is what was happening in the case of Innate.

What about Representative Collins and his ties to Innate Immunotherapeutics?

Mr. Collins’s involvement with a small, speculative company is indeed odd, some of the experts said.

Innate is a tiny biotechnology company that is traded on the Australian stock exchange and has no approved drugs. The company has run out of money more than once and nearly closed its doors.

But Mr. Collins has remained one of its biggest boosters. He has been an investor in the company since 2005.

Several of Mr. Collins’s friends and associates are also investors, including two of his adult children, his chief of staff, and several donors.

In an interview this week with Wolf Blitzer of CNN, Mr. Collins said he frequently mentioned the company because he was proud of it.

“I talk about it all the time, just as you would talk about your children,” he said.

Some ethics experts have said this boosterism, coming from an elected official, is problematic, because people who seek to influence him could buy stock in the company as a way of currying favor.

“The focus on this company is beyond curious,” Mr. Gillers said, while noting there was still no way to tell whether wrongdoing occurred. “Right now it’s weird, but we don’t know why it’s weird.”