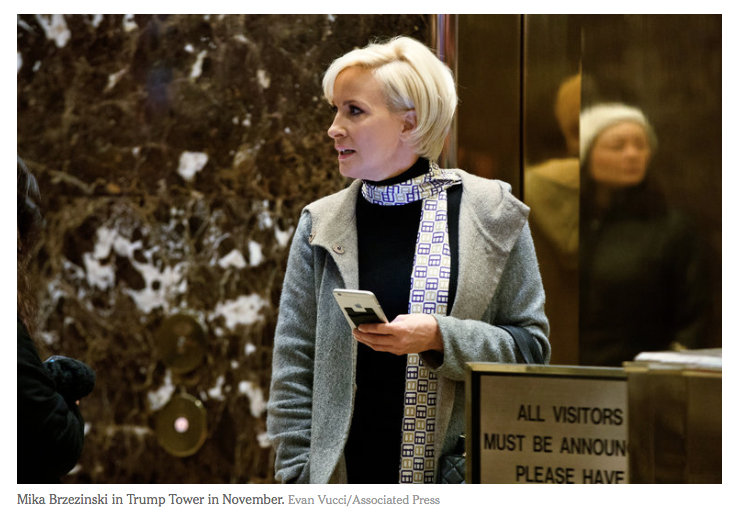 President Trump faced a swift and bipartisan backlash on Thursday after he assailed the television host Mika Brzezinski in unusually personal and crude terms, the latest of a string of escalating attacks by the president on the national news media.

Shortly before 9 a.m., as Ms. Brzezinski’s MSNBC show “Morning Joe” was ending, Mr. Trump used Twitter to taunt Ms. Brzezinski and her co-host, Joe Scarborough, referring to them as “low I.Q. Crazy Mika, along with Psycho Joe” and describing a meeting with Ms. Brzezinski in which, he said, “she was bleeding badly from a face-lift.” 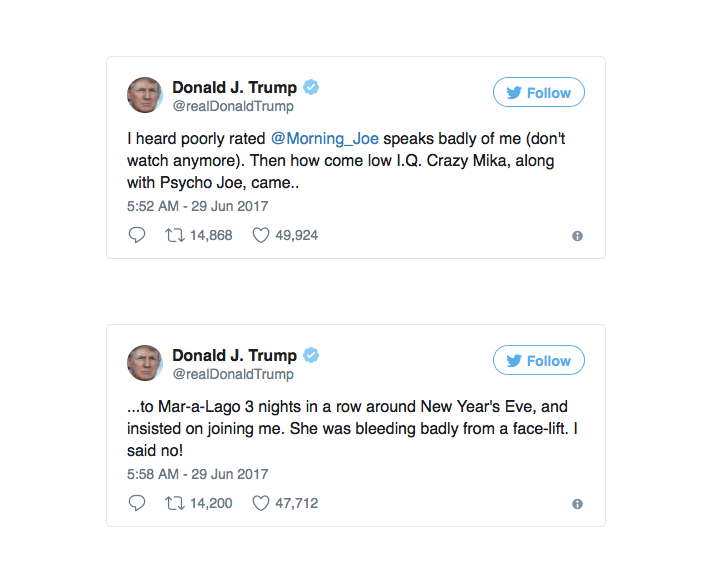 Mr. Trump is famed for his online provocations, but the coarseness of his remark about Ms. Brzezinski — coming from a president who has faced criticism for his attitudes toward women — drew immediate denunciations in the political world, including from prominent members of his own party.

“Obviously, I don’t see that as an appropriate comment,” the House speaker, Paul D. Ryan, told reporters on Capitol Hill. Senator Susan Collins of Maine, a Republican whose vote is considered critical to the success of Mr. Trump’s health care plan, wrote on Twitter, “This has to stop.” She said, “We don’t have to get along, but we must show respect and civility.”

Senator Lindsey Graham of South Carolina, also a Republican, wrote on Twitter, “Mr. President, your tweet was beneath the office and represents what is wrong with American politics, not the greatness of America.”

The president has fumed for weeks about his coverage on “Morning Joe,” where Mr. Scarborough and Ms. Brzezinski have been increasingly blistering in their commentary about the Trump administration. They have openly questioned Mr. Trump’s mental state, comments that particularly upset the president, according to a senior administration official.

Mr. Trump has used the “psycho” moniker in private to describe Mr. Scarborough, and he views the “Morning Joe” criticism as a personal betrayal, the official said. Until recently, the president and the co-hosts had a relatively friendly relationship. Mr. Scarborough and Ms. Brzezinski visited Mr. Trump’s Florida estate, Mar-a-Lago, this past New Year’s.

On Thursday, Ms. Brzezinski responded to the president’s comments by posting a photograph on Twitter of a box of Cheerios with the words, “Made For Little Hands.” The tweet referred to a longstanding insult against Mr. Trump referring to the size of his hands. In a statement, MSNBC said, “It’s a sad day for America when the president spends his time bullying, lying and spewing petty personal attacks instead of doing his job.” 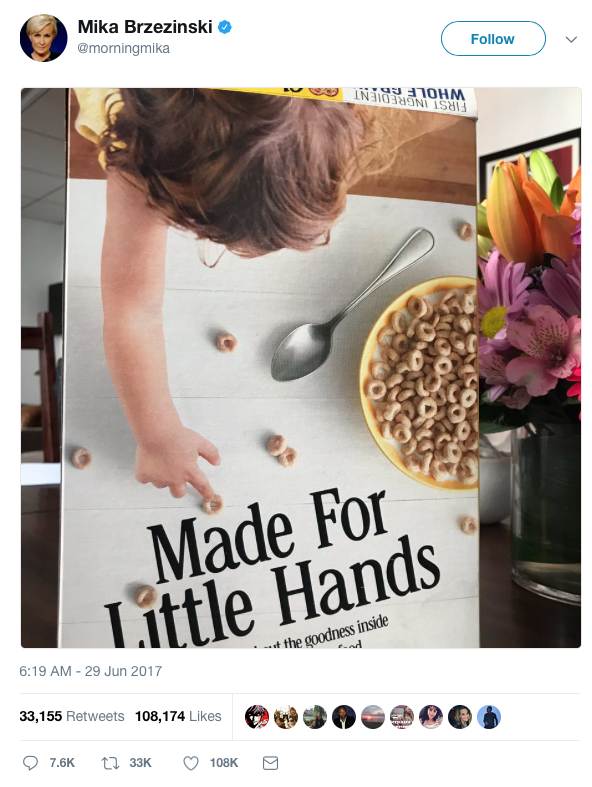 “I don’t think that the president has ever been someone who gets attacked and doesn’t push back,” she told the Fox anchor Bill Hemmer. “This is a president who fights fire with fire and certainly will not be allowed to be bullied by liberal media, and the liberal elites within the media.”

“But is that necessary?” Mr. Hemmer asked, referring to the graphic nature of Mr. Trump’s remark about Ms. Brzezinski.

“I think what’s necessary is to push back against unnecessary attacks on the president,” Ms. Sanders replied.

Mr. Trump also received a boost from one of his stalwart defenders, Sean Hannity of Fox News, who suggested that the president’s remarks about Mr. Scarborough were justified. “Maybe liberal Joe should stop calling the @POTUS a schmuck, a liar, a thug and mentally unhinged,” Mr. Hannity wrote on Twitter.

Mr. Trump has launched broadsides this week against several of the country’s major television networks and newspapers, accusing the news media of creating “fake news” and of unfairly fixating on his campaign’s links to Russian officials. At a televised White House briefing, Ms. Sanders castigated CNN and said that Americans “deserve something better” from the country’s media.

A retraction by CNN of a report about one of Mr. Trump’s associates — followed by the resignations of three CNN journalists who worked on the story — has buoyed Mr. Trump and his team. The president has seized on the CNN report as evidence that the establishment news media is biased against him, and he has expanded his criticisms to encompass other news organizations including The New York Times and The Washington Post.

Mr. Trump’s comment about Ms. Brzezinski echoed a contentious remark that he made about another female television anchor, Megyn Kelly, during last year’s presidential campaign. “You could see there was blood coming out of her eyes, blood coming out of her wherever,” Mr. Trump said, a remark that was widely seen as a reference to menstruation and drew rebukes from women’s groups.

NYT: Trump Mocks Mika Brzezinski; Says She Was ‘Bleeding Badly From a Face-Lift’ added by Peter Lance on June 29, 2017
View all posts by Peter Lance →