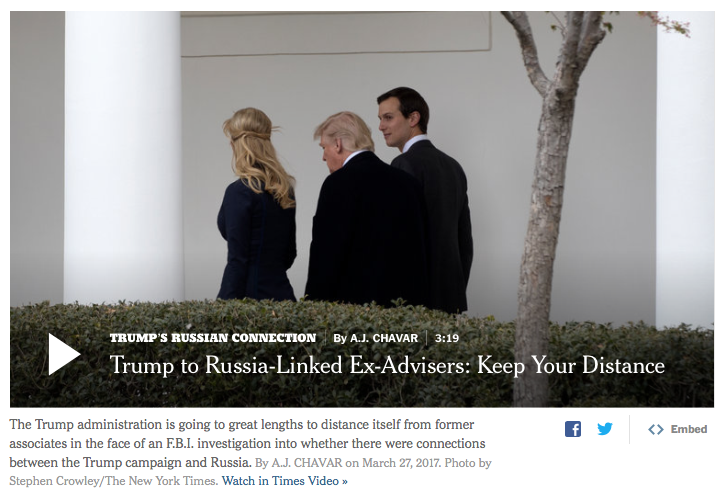 Senate investigators plan to question Jared Kushner, President Trump’s son-in-law and a close adviser, as part of their broad inquiry into ties between Trump associates and Russian officials or others linked to the Kremlin, according to administration and congressional officials.

The White House Counsel’s Office was informed this month that the Senate Intelligence Committee, which is investigating Russian interference in the 2016 presidential election, wanted to question Mr. Kushner about meetings he arranged with the Russian ambassador, Sergey I. Kislyak, according to the government officials. The meetings, which took place during the transition, included a previously unreported sit-down with the head of Russia’s state-owned development bank.

Until now, the White House had acknowledged only an early December meeting between Mr. Kislyak and Mr. Kushner, which occurred at Trump Tower and was also attended by Michael T. Flynn, who would briefly serve as the national security adviser.

Later that month, though, Mr. Kislyak requested a second meeting, which Mr. Kushner asked a deputy to attend in his stead, officials said. At Mr. Kislyak’s request, Mr. Kushner later met with Sergey N. Gorkov, the chief of Vnesheconombank, which the United States placed on its sanctions list after President Vladimir V. Putin of Russia annexed Crimea and began meddling in Ukraine.

A White House spokeswoman, Hope Hicks, confirmed those meetings, saying in an interview that nothing of consequence occurred and portraying them as routine diplomatic encounters that went nowhere. But Mr. Gorkov, who previously served as deputy chairman of the board at Sberbank, Russia’s largest state-owned bank, said in a statement issued by his bank that he met with Mr. Kushner in his capacity as the then-chief executive of Kushner Companies, his family’s sprawling real estate empire.

Members of presidential transition teams routinely meet with foreign officials, and there is nothing inherently improper about sitting down with the Russian ambassador. Part of Mr. Kushner’s role during the campaign and the transition was to serve as a chief conduit to foreign governments and officials, and Ms. Hicks said he met with dozens of officials from a wide range of countries.

She added that Mr. Kushner was willing to talk to Senate investigators about the meetings with Mr. Kislyak and the banker, saying, “He isn’t trying to hide anything and wants to be transparent.”

Still, meetings between Trump associates and Russian officials or others linked to Mr. Putin are now of heightened interest as several congressional committees and F.B.I. investigators try to determine the scope of the Russian intervention in the election and links between Russians and anyone around Mr. Trump.

The Senate panel’s decision to question Mr. Kushner would make him the closest person to the president to be called upon in any of the investigations, and the only one currently serving in the White House. The officials who initially described that Senate inquiry to The New York Times did so on the condition of anonymity in order to speak candidly about Mr. Trump’s son-in-law.

The F.B.I. declined to comment. There are no indications that Mr. Kushner is a focus of its investigation, and Ms. Hicks said he had not been questioned by the bureau.

Mr. Kislyak’s contacts with Trump administration officials have proved problematic: Mr. Flynn was fired for misleading Vice President Mike Pence about the nature of the conversations he had with the Russian envoy, claiming he had not discussed the sanctions against Russia when communications intercepts showed he had.

Attorney General Jeff Sessions was forced to recuse himself from any Russian inquiries led by the Justice Department after he failed to disclose at his Senate confirmation hearing that he had met with Mr. Kislyak during the campaign.

The meetings Mr. Kushner arranged with Mr. Kislyak all took place in December, during the transition, Ms. Hicks said. Mr. Kushner attended the initial meeting with Mr. Kislyak to explore whether a channel could be set up between the Russian government and the incoming administration to improve relations between the United States and Russia, Ms. Hicks said. They also discussed how the United States and Russia could cooperate on issues in the Middle East, an area Mr. Kushner has been deputized to take the lead on, she said. 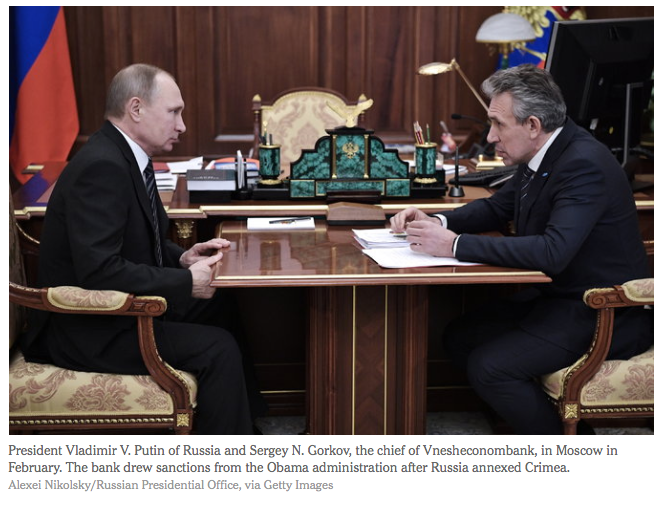 Mr. Gorkov is a graduate of the academy of Federal Security Service of Russia, a training ground for Russian intelligence and security forces. And as the head of Vnesheconombank, Mr. Gorkov presides over a bank whose supervisory board is controlled by members of Mr. Putin’s government, including Prime Minister Dimitri A. Medvedev. It has been used to bail out oligarchs favored by Mr. Putin, as well as to help fund pet projects like the 2014 Winter Olympics in Sochi.

Around the time the Russian ambassador asked that Mr. Kushner meet with Mr. Gorkov, American intelligence agencies were concluding that Russian spies, acting on the orders of Mr. Putin, had sought to sway the election by hacking political targets, like the Democratic National Committee, and passing stolen emails to WikiLeaks.

Mr. Kushner had not yet stepped aside as chief executive of Kushner Companies, which was trying to attract investment for the company’s crown jewel, an overleveraged Manhattan office tower on Fifth Avenue. The company was in the midst of negotiations to redevelop the building with Anbang Insurance Group, a Chinese company with ties to the Beijing government.

Senate investigators plan to ask Mr. Kushner if he discussed ways to secure additional financing for the building during his meeting with the Russian banker, a government official said. Ms. Hicks said that no such business was discussed at the half-hour session, during which Mr. Gorkov expressed a desire for an open dialogue. Nor did the issue of the American sanctions against Russian entities like Vnesheconombank arise, she added. “It really wasn’t much of a conversation,” she said.

Mr. Gorkov, in the statement, went further. He said that bank managers, as part of a new strategy for the institution, met with international financial institutions in Europe, Asia and America to talk about promising trends and sectors. He also met with representatives of “business circles of the U.S., including with the head of Kushner Companies, Jared Kushner.”

And in an interview on the state-owned Rossiya 24 TV channel on Dec. 29, the same month that he met with Mr. Kushner, Mr. Gorkov said he hoped that the situation caused by Ukraine sanctions imposed by the Americans against Russian banks like his “would change for the better.”

The inquiry into Mr. Kushner’s dealings with the ambassador and Mr. Gorkov may further complicate Mr. Trump’s efforts to move past the Russia situation. Last week, the F.B.I. director, James B. Comey, confirmed in testimony to Congress that his agency had begun a counterintelligence investigation into Russian interference and whether any associates of the president might have colluded with the Russian government.

Mr. Trump’s former campaign chairman, Paul Manafort, has been under scrutiny in the F.B.I. investigation because of his ties to pro-Russian politicians in Ukraine. In August, he was forced to step down as the chairman of Mr. Trump’s campaign amid reports that his name emerged in a secret ledger in Ukraine listing off-the-books payments for consulting work he did for a Russian-backed government there. He has denied any wrongdoing and has said he never worked for the Russian government.

Other Trump associates who have been drawn into the F.B.I. investigation include Roger J. Stone Jr., a longtime Republican operative who has acknowledged contacts with Guccifer 2.0, the mysterious online figure that is believed to be a front for Russian intelligence officials, and Carter Page, a former foreign policy adviser to the campaign who has done extensive business in Russia. Both have denied doing anything unlawful.

The Senate investigation is proceeding on a separate track from the F.B.I. investigation while drawing on some of the same material, like routine electronic surveillance of the Russian ambassador and his embassy cohort. The committee chairman, Senator Richard M. Burr, Republican of North Carolina, has told the White House he plans to interview all Trump aides who had contact with Russian officials, according to White House officials. Depending on those interviews, some may be called upon to testify in closed-door sessions.

Mr. Burr and Senator Mark Warner, a Virginia Democrat and the committee’s vice chairman, said in a statement: “Mr. Kushner has volunteered to be interviewed as part of the committee’s investigation into the Russian activities surrounding the 2016 election.” They added that their inquiry would “follow the intelligence wherever it leads.”

The extent of Mr. Kushner’s interactions with Mr. Kislyak caught some senior members of Mr. Trump’s White House team off guard, in part because he did not mention them last month during a debate then consuming the White House: how to handle the disclosures about Mr. Flynn’s interactions with the Russian ambassador.

Ms. Hicks said that Mr. Trump had authorized Mr. Kushner to have meetings with foreign officials that he felt made sense, and to report back to him if those meetings produced anything of note. She said that because in Mr. Kushner’s view the meetings were inconsequential, it did not occur to him to mention them to senior staff members earlier.

“There was nothing to get out in front of on this,” she said.