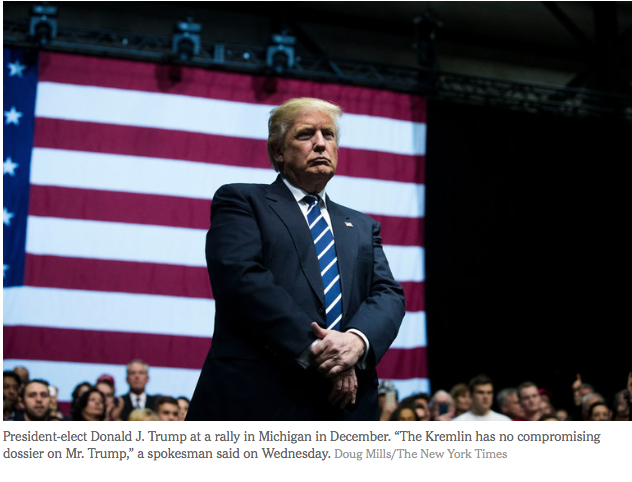 When the Soviet Union set up the Intourist hotel and travel company under Stalin, the bellboys, drivers, cooks and maids all worked for the N.K.V.D., the secret police agency later known as the K.G.B. Also on the payroll were the prostitutes deployed to entrap and blackmail visiting foreign politicians and businessmen.

Russia’s Intourist hotels have since been sold off, including the travel company’s once dowdy flagship hostelry just down the road from the Kremlin. Lavishly refurbished and fitted with a spa and special security features, the hotel is now the Ritz-Carlton, a five-star temple of luxurious living that promotes itself as an “unforgettable retreat in the heart of the city.”

But, according to uncorroborated and highly defamatory memos prepared by a former British intelligence operative for a Washington political and corporate research firm, the Ritz has remained a place where foreign guests, including Donald J. Trump, can fall victim to the Russian art of “kompromat,” the collection of compromising material as a source of leverage.

A summary of the former spy’s findings was presented last week to President Obama and President-elect Trump, who at a news conference on Wednesday denounced publication of the allegations as “fake news.” A spokeswoman for the Russian Foreign Ministry dismissed the accusations as “mind-boggling nonsense” and “outrageous drivel.”

A hotel spokeswoman declined to discuss the matter. “In line with our company standard to protect the privacy of our guests, we do not speak about any individual or group with whom we may have done business,” Irina Zaitseva, the hotel’s marketing and communication manager, said in an email.

Whatever did or did not happen in Mr. Trump’s hotel suite in 2013, when he visited Moscow to attend a Miss Universe contest, Russia has a long and well-documented record of using kompromat to discredit the Kremlin’s foes and to lean on its potential friends.

For decades, hotels across the former Soviet Union visited by foreigners were equipped with bugging devices and cameras by the K.G.B. A remnant can still be seen in Tallinn, the capital of the former Soviet republic Estonia, where the new Finnish owners of the former Intourist hotel have set up a museum to display the surveillance and other techniques used to spy on and blackmail foreign guests.

Peep Ehasalu, who helped set up the museum, said that 60 of the hotel’s 423 rooms were bugged and reserved for “interesting persons” like foreign businessmen. Guests who were judged vulnerable to blackmail were put in a handful of rooms with holes in the walls through which special cameras would film dalliances with prostitutes. All the prostitutes, Mr. Ehasalu said, worked for the K.G.B., which chased away freelance sex workers who had not been officially approved.

Most of the guests at the time were from Finland, which had unusually close and accommodating relations with Moscow but which Soviet leaders always worried might tilt toward the West. To discourage that, the K.G.B. targeted decision makers from Finland who made trips to Estonia.

“If a politician or businessman knows that the K.G.B. can publish embarrassing photos of him or send them to his wife, this person is very easy to control,” Mr. Ehasalu said in a telephone interview. Businessmen who fell into this trap, he said, “all went back home and said life in the Soviet Union was fine and that Finland should make more business with the Soviets.”

An early victim of kompromat was Joseph Alsop, an influential American newspaper columnist who, during a 1957 visit to Moscow, fell into a gay “honey trap” set by the K.G.B., which filmed his encounter with a young Russian man at his hotel.

In his own account of how two K.G.B. officers stormed into his room shortly after he finished having sex, Mr. Alsop said he was told that there were photographs of “the act” and that he needed “to help them a little if they are going to help me.” He informed the American Embassy and hastily left the Soviet Union.

Russia, unlike Estonia, has hardly turned its back on Soviet-era methods. The F.S.B., the successor agency to the K.G.B., lost much of its influence in the early 1990s, but has reasserted itself forcefully since Vladimir V. Putin took power 16 years ago.

Before becoming president, Mr. Putin played a prominent role in a particularly successful kompromat operation. As head of the F.S.B. in 1997, he won the trust of President Boris Yeltsin by helping destroy the career of Russia’s prosecutor general, Yury Skuratov. After starting an investigation into Kremlin corruption, the prosecutor was disgraced on national television by the broadcast of a video that showed a man who looked like him in bed with two young women.

Mr. Putin certified in public that the man in the video, widely believed to have been arranged and then filmed by the F.S.B., was indeed the prosecutor general. Mr. Skuratov resigned, the corruption investigation ended and a grateful Mr. Yeltsin named Mr. Putin prime minister, clearing his path to the presidency.

Unlike entirely fabricated reports of criminal or simply embarrassing behavior, kompromat is generally true, though photographs and videos are sometimes tinkered with to heighten the embarrassment. This makes it a particularly blunt and dangerous weapon that can easily backfire.

Mark Galeotti, an expert on Russia’s security services at the Institute of International Relations in Prague, said that the unverified strategy suggested by the British spy was “very risky” and that it would be nonsensical for Russia to blackmail Mr. Trump.

“If the Russians ever released such a video, they would be declaring war on Trump,” he said. “And that is definitely not something Putin would want to do.”

The release of embarrassing material has had devastating effects on the families and careers of some activists, leaving scars lasting years. But the release of such material can also be a badge of honor, indicating that the target did not succumb to blackmail.

Ilya V. Yashin, a young activist and ally of the slain opposition leader Boris Nemtsov, was among the targets of a “honey trap” operation that involved a woman who went by the nickname Mumu and managed to seduce at least three journalists and members of the Russian opposition. She had access to an apartment wired for surveillance and stocked with cocaine and sex toys, according to Mr. Yashin, who spoke in an interview about his experience.

Mr. Yashin, 25 at the time and unmarried, said Mumu had contacted him online. They dated for a few weeks. One evening, she called and asked him to come over for a “surprise” that turned out to be a second woman who wanted to engage in a ménage à trois.

“What startled me when I came over is how the two girls basically attacked me sexually once I came inside the door,” Mr. Yashin said. He did not resist, he said. “Later, I became more suspicious when one of them took out a big bag of sex toys. Katya got a whip and started whipping me. I told her to put it and all other toys away.” Soon, the women also produced cocaine.

Mr. Yashin said he suspected a trap and “told the girls that I needed to go and began to get dressed.”

No video of the encounter was ever made public; Mr. Yashin said this was probably because he had not been filmed with the sex toys or cocaine. Other videos filmed in the same apartment were released in 2010.

The tactic did not always succeed. “Some people didn’t buy it at all,” Mr. Yashin said. Mumu had invited Dmitri Oreshkin, a political analyst, to her apartment. Instead, Mr. Yashin said, Mr. Oreshkin invited her to his home, “where she was greeted by his wife.”