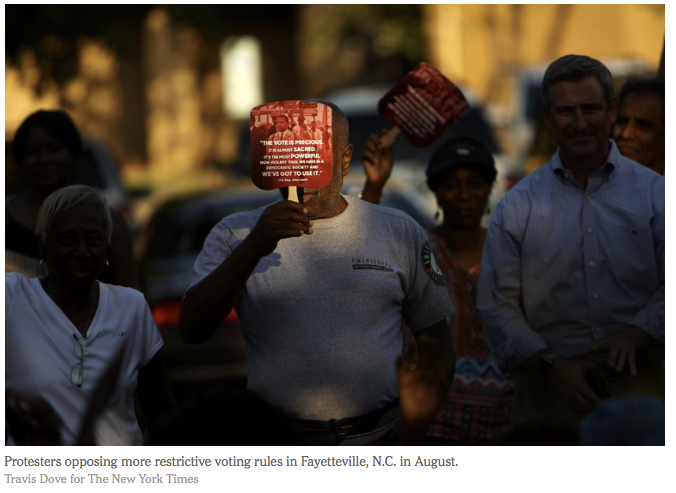 A federal judge barred three North Carolina counties on Friday from revoking the voting rights of thousands of residents whose eligibility to cast ballots had been challenged by Republican political operatives only weeks before the presidential election.

The ruling settled for now a politically freighted battle, in a hotly contested battleground state, over a move that supporters called an effort to keep elections honest and critics said was a bald attempt at voter suppression.

Judge C. Loretta Biggs of United States District Court in Winston-Salem said that election officials in the three counties had ignored a 23-year-old federal law that lays out specific rules about when and how voters’ registrations can be canceled.

Her remedy, a preliminary injunction, prevents the counties from purging the targeted voters unless a later trial produces a ruling in their favor.

That decision was one of three federal rulings on Friday aimed at protecting the right to vote.

In Arizona, the United States Court of Appeals for the Ninth Circuit blocked a state law that barred third parties from collecting completed absentee ballots from voters — so-called ballot harvesting, a widely used get-out-the-vote tactic. And in Ohio, a United States district judge granted Democrats’ request to bar Donald J. Trump’s campaign and its allies from intimidating voters, but extended the ban to Hillary Clinton’s campaign as well.

In the Ohio lawsuit, one of five that Democrats have filed in major states, Judge James S. Gwin issued a broad order that barred political workers from a range of activities within 100 feet of a polling place and 10 feet of a line of voters. They include questioning, harassing, loitering, following, and photographing or recording prospective voters or those who are leaving polling places after voting.

The judge also extended the order to a Trump political ally, Roger Stone, who had formed a group called “Stop the Steal” that announced aggressive poll-monitoring plans, including stopping voters to conduct “exit polls” after they had cast ballots. That was also barred within the areas defined in the order.

But judges in two of the other five states where similar suits were filed acted differently. A federal district judge in Arizona refused the Democratic request for an injunction, saying Republican urgings to watch polls for fraud “simply do not prove actual or likely intimidation.” And a Nevada court declined to issue an order against the Trump campaign or the Nevada Republican Party, but said it would consider a similar order against Mr. Stone’s organization on Monday.

The North Carolina ruling involves roughly 4,500 registered voters in Beaufort, Cumberland and Moore Counties who Republican challengers said had moved away, voiding their registration to vote. In all three cases, the challengers had sent mail to the voters’ home addresses and reported to local election officials the names of those voters whose mail was returned and marked undeliverable.

Some of the challenged voters had in fact died or moved out of the three counties. But in a lawsuit against the state and county election boards that sought to quash the challenges, the North Carolina and Moore County branches of the N.A.A.C.P. said that many others had not. They named four African-American voters, including a 100-year-old woman, whose registrations had been challenged or canceled even though they were legally entitled to cast ballots and had voted regularly in recent elections.

The groups said that in at least one county, the targeted voters were disproportionately African-American. Of the roughly 4,500 challenged voters, Judge Biggs said, 3,500 to 4,000 were removed from voting rolls.

Divining the eligibility of voters by monitoring undeliverable mail, a practice commonly called voter caging, is widely seen as an unreliable and even suspect practice. Since 1982, the Republican National Committee and the New Jersey Republican State Committee have operated under a consent decree allowing a federal judge to review plans for any so-called ballot security program, after they conducted a widespread voter-caging effort in black and Latino neighborhoods.

Some advocacy groups nevertheless use voter caging to combat what they say is voter fraud at polling places, although experts broadly agree that in-person fraud, in which someone impersonates another voter, is all but nonexistent.

The registration battle is the latest acrid dispute over voting rights and suppression in North Carolina, where the outcomes of a number of high-profile election contests could hinge on turnout.

This summer, a federal appeals court voided much of a sweeping election law that the state’s Republican-run Legislature had enacted, saying it was written expressly to discourage African-Americans from voting. Two Republican Party officials then sent emails to local election officials urging them to put in place the court’s ruling in ways that would suppress Democratic turnout.

Last week, Judge Biggs ordered the state to give provisional ballots to voters who said they tried to register at state motor vehicle offices, public assistance centers and other agencies, but whose names were not on the rolls. Such registrations had plummeted nearly 60 percent in the two years after Gov. Pat McCrory, a Republican, took office in early 2013.

On Thursday, Democrats charged in another lawsuit that North Carolina Republicans had allied with Mr. Trump’s campaign and others to intimidate minority voters, in part by urging Trump supporters to monitor polling places.

The N.A.A.C.P. has cast the voter purges in the three counties as another attempt at suppression. The smallest of the challenges, involving about 140 voters in Beaufort County, was brought by a Republican who lost a local election and by three of his associates.

The others, in Moore and Cumberland counties, were filed by a local Republican politician and a local party official. But their lists of supposedly invalid voters were assembled by the North Carolina Voter Integrity Project, an organization whose mission has drawn broad support from Tea Party adherents.