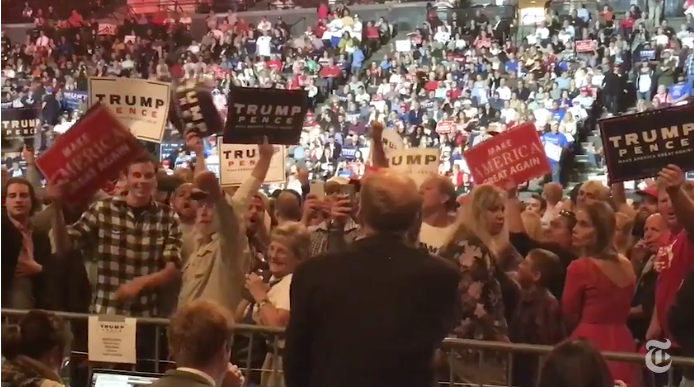 CINCINNATI — The boos at the Trump rally were scattershot as the first laptop-toting reporter emerged from the black curtains covering a side entrance a few hundred feet from the spotlighted stage.

Within moments, they grew to a menacing, thunderous roar.

Donald J. Trump’s supporters have aimed their verbal ire at undocumented immigrants, Republican rivals and Hillary Clinton. This week, they have settled on a new target: the news media.

But even reporters long accustomed to the toxic fervor of Trump rallies were startled — and even frightened — at the vitriol of a Cincinnati crowd on Thursday evening as more than 15,000 supporters flashed homemade signs, flipped middle fingers and lashed out in tirades often laced with profanity as journalists made their way to a crammed, fenced-in island in the center of the floor.

The Trump supporters crowded by the metal barriers protecting the area, leaning over to get in one last insult before returning their attention to the stage as Rudolph W. Giuliani strode out.

Mr. Trump’s efforts to discredit news media organizations, painting them as part of a broad conspiracy with the Clinton campaign, have reached an intensity never before seen from a presidential candidate — so much so that the Committee to Protect Journalists, a nonprofit group often focused on defending press freedoms in war-torn and totalitarian countries, made a rare statement regarding American elections.

“Donald Trump, through his words and actions as a candidate for president of the United States, has consistently betrayed First Amendment values,” Sandra Mims Rowe, the chairwoman for the group, said in a statement Thursday night, announcing that the group had “passed a resolution declaring Trump an unprecedented threat to the rights of journalists and to C.P.J.’s ability to advocate for press freedom around the world.”

The news media has often been a frequent target of Mr. Trump’s wrath, but he has escalated his attacks over in recent days after news accounts that he behaved abusively toward women.

Trump’s Comments and Your Relationship

By attacking the news media, Mr. Trump appears to be seeking to delegitimize an industry he views as an impediment to his presidential ambitions, while riling up his base of supporters.

On Thursday evening, there were noticeably more Secret Service agents monitoring the news media’s pen, though the agency declined to comment about the protection. Both CNN and NBC News have their own security at Trump rallies to protect their reporters and cameramen.

Accusing the news media of bias has been a political tactic for decades, and a sure crowd-pleaser, with plenty of Mr. Trump’s fellow candidates quick with similar put-downs during the primaries. Senator Ted Cruz of Texas used to jokingly refer to “the Democratic Party and the media, but I repeat myself,” and Senator Bernie Sanders would criticize the “corporate media” in suggesting that it functioned to serve the interests of the corporate class.

Numerous Trump supporters at his rallies echoed the candidate’s attacks on the news media when they were asked about reports that Mr. Trump acted inappropriately with women.

In recent days, Mr. Trump has sharply escalated those attacks, moving from routine critiques to dedicating nearly the majority of major speeches to ridiculing what he sees as a media cabal that has declared war on him.

“Let’s be clear on one thing, the corporate media in our country is no longer involved in journalism,” he told the crowd in West Palm Beach on Thursday. “They’re a political special interest no different than any lobbyist or other financial entity with a total political agenda, and the agenda is not for you, it’s for themselves.”

The crowd erupted in an extensive booing that lasted for minutes at a time, softening while Mr. Trump spoke but still gesticulating and jeering at the media pen.

“For them, it’s a war,” he continued, and suddenly the boos shifted to ecstatic cheers.