NYT Opinion: ALL THE PRESIDENT’S LIES 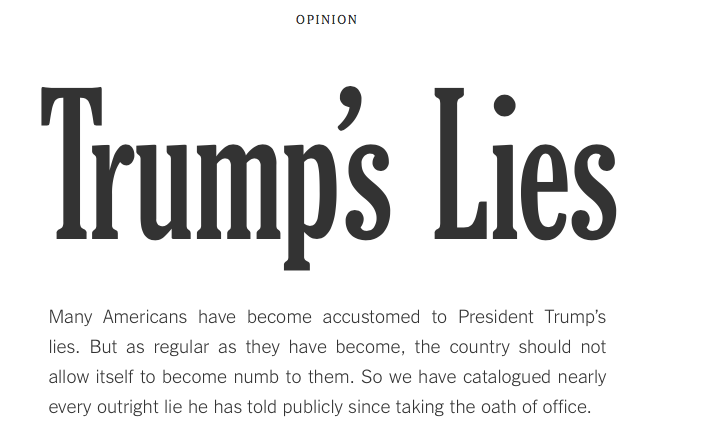 By David Leonhardt and Stuart A. Thompson Published June 25th, 2017

CLICK IMAGE ABOVE for direct link to NYT opinion piece.

President Trump’s political rise was built on a lie (about Barack Obama’s birthplace). His lack of truthfulness has also become central to the Russia investigation, with James Comey, the former director of the F.B.I., testifying under oath about Trump’s “lies, plain and simple.”

There is simply no precedent for an American president to spend so much time telling untruths. Every president has shaded the truth or told occasional whoppers. No other president — of either party — has behaved as Trump is behaving. He is trying to create an atmosphere in which reality is irrelevant.

We have set a conservative standard here, leaving out many dubious statements (like the claim that his travel ban is “similar” to Obama administration policy). Some people may still take issue with this standard, arguing that the president wasn’t speaking literally. But we believe his long pattern of using untruths to serve his purposes, as a businessman and politician, means that his statements are not simply careless errors.

We are using the word “lie” deliberately. Not every falsehood is deliberate on Trump’s part. But it would be the height of naïveté to imagine he is merely making honest mistakes. He is lying.

The list above uses the conservative standard of demonstrably false statements. By that standard, Trump told a public lie on at least 20 of his first 40 days as president. But based on a broader standard — one that includes his many misleading statements (like exaggerating military spending in the Middle East) — Trump achieved something remarkable: He said something untrue, in public, every day for the first 40 days of his presidency. The streak didn’t end until March 1. 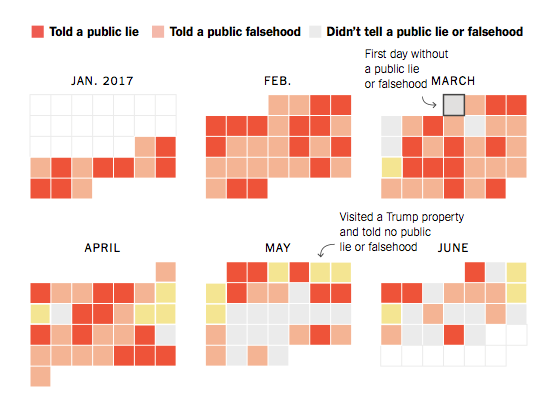 Since then, he has said something untrue on at least 74 of 113 days. On days without an untrue statement, he is often absent from Twitter, vacationing at Mar-a-Lago in Florida, or busy golfing.

The end of May was another period of relative public veracity — or at least public quiet — for the president. He seems to have been otherwise occupied, dealing with internal discussions about the Russia investigation and then embarking on a trip through the Middle East and Europe. 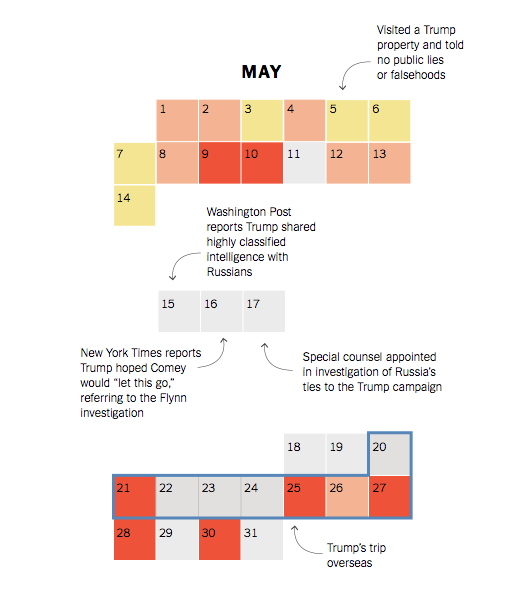 Sometimes, Trump can’t even keep his untruths straight. After he reversed a campaign pledge and declined to label China a currency manipulator, he kept changing his description of when China had stopped the bad behavior. Initially, he said it stopped once he took office. He then changed the turning point to the election, then to since he started talking about it, and then to some uncertain point in the distant past.

The Public’s Mistrust of Trump Grows

Trump has retained the support of most of his voters as well as the Republican leadership in Congress. But he has still paid some price for his lies. Nearly 60 percent of Americans say the president is not honest, polls show, up from about 53 percent when he took office. 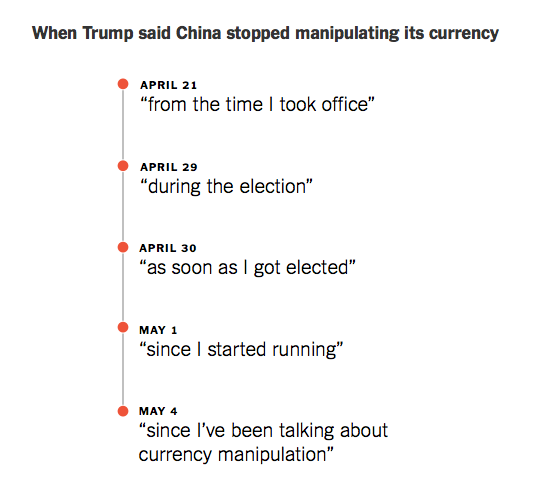 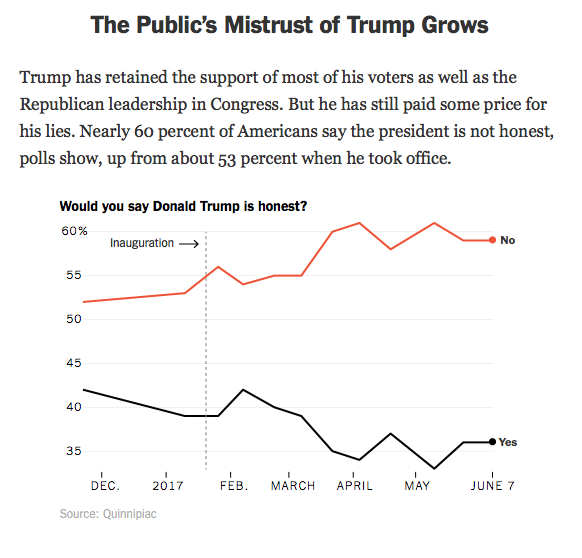 David Leonhardt is a New York Times columnist. Stuart A. Thompson is the graphics director for the Opinion section.

Correction: June 23, 2017
An earlier version of this graphic included an incorrect total for the number of days Donald Trump told a lie during his first two months as president. It was 20, not 25.