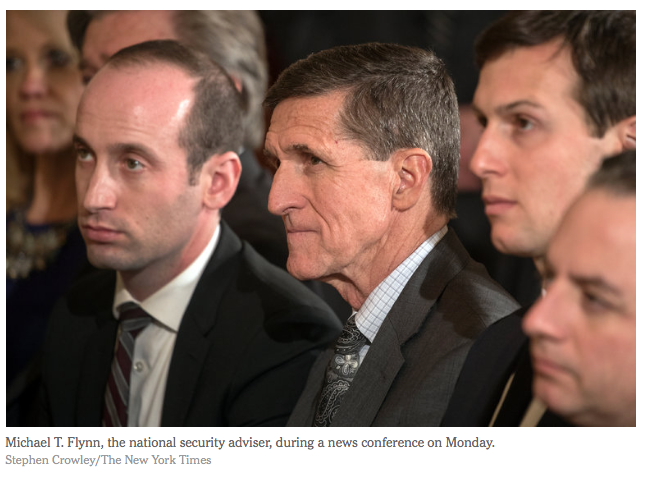 WASHINGTON — Michael T. Flynn, the national security adviser, resigned on Monday night after it was revealed that he had misled Vice President Mike Pence and other top White House officials about his conversations with the Russian ambassador to the United States.

Mr. Flynn, who served in the job for less than a month, said he had given “incomplete information” to about a telephone call he had with the ambassador in late December about American sanctions against Russia, weeks before Mr. Trump’s inauguration. Mr. Flynn previously had denied that he had any substantive conversations with Ambassador Sergey I. Kislyak, and Mr. Pence repeated that claim in television as recently as earlier this month.

In his resignation letter, which the White House emailed to reporters, Mr. Flynn said he had held numerous calls with foreign officials during the transition. “Unfortunately, because of the fast pace of events, I inadvertently briefed the Vice President Elect and others with incomplete information regarding my phone calls with the Russian Ambassador,” he wrote. “I have sincerely apologized to the President and the Vice President, and they have accepted my apology.”

The White House said in the statement that it was replacing Mr. Flynn with retired Lt. General Joseph Keith Kellogg, Jr., a Vietnam War veteran, as acting national security adviser.

Mr. Flynn was an early and ardent supporter of Mr. Trump’s candidacy, and in his resignation he sought to the praise the president. “In just three weeks,” Mr. Flynn said, the new president “has reoriented American foreign policy in fundamental ways to restore America’s leadership position in the world.”

But in doing so, he inadvertently illustrated the brevity of his tumultuous run at the National Security Council, and the chaos that has gripped the White House in the first weeks of the Trump administration — and created a sense of uncertainty around the world.

Officials said Mr. Pence has told others in the White House that he believes Mr. Flynn lied to him by saying he had not discussed the topic of sanctions on a call with the Russian ambassador in late December. Even the mere discussion of policy — and the apparent attempt to assuage the concerns of an American adversary before Mr. Trump took office — represents a remarkable breach of protocol. 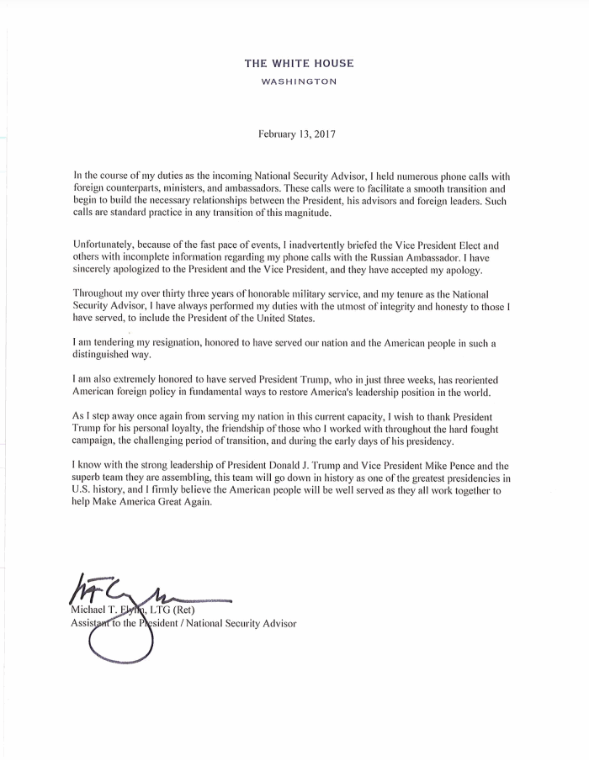 The F.B.I. has been examining Mr. Flynn’s phone calls as he has come under growing questions about his interactions with Russian officials and his management of the National Security Council. The blackmail risk envisioned by the Justice Department would stem directly from Mr. Flynn’s attempt to cover his tracks with his bosses. The Russians knew what had been said on the call; thus, if they wanted Mr. Flynn to do something, they could threaten to expose the lie if he refused.

The Justice Department’s warning to the White House was first reported on Monday night by The Washington Post.

In addition, the Army has been investigating whether Mr. Flynn received money from the Russian government during a trip he took to Moscow in 2015, according to two defense officials. Such a payment might violate the Emoluments Clause of the Constitution, which prohibits former military officers from receiving money from a foreign government without consent from Congress. The defense officials said there was no record that Mr. Flynn, a retired three-star Army general, filed the required paperwork for the trip.

Earlier Monday, Sean Spicer, the White House press secretary, told reporters that “the president is evaluating the situation.” Mr. Spicer said Mr. Trump would be talking to Mr. Pence and others about Mr. Flynn’s future.

In a sign of the internal confusion over Mr. Flynn’s status, the statement from Mr. Spicer came shortly after the president’s counselor, Kellyanne Conway, said in an interview on MSNBC that Mr. Flynn had the “full confidence of the president.”

Mr. Trump ignored questions about Mr. Flynn’s fate that were shouted at him by reporters during an Oval Office swearing-in ceremony on Monday night for newly confirmed Treasury Secretary Steven T. Mnuchin.

The White House has examined a transcript of a wiretapped conversation that Mr. Flynn had with Sergey I. Kislyak, the Russian ambassador, in December, according to administration officials. Mr. Flynn originally told Mr. Pence and others that the call was limited to small talk and holiday pleasantries.

But the conversation, according to officials who have seen the transcript of the wiretap, also included a discussion about sanctions imposed on Russia after intelligence agencies determined that Mr. Putin’s government tried to interfere with the 2016 election on Mr. Trump’s behalf. Still, current and former administration officials familiar with the call said the transcript was ambiguous enough that Mr. Trump could justify both firing or retaining Mr. Flynn. 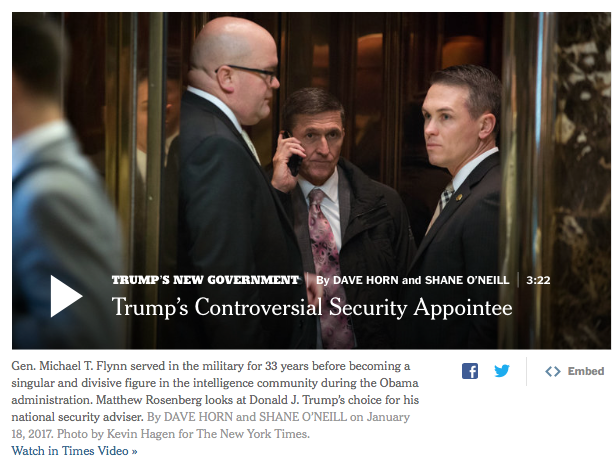 Mr. Trump, however, has become increasingly concerned about the continued fallout over Mr. Flynn’s behavior, according to people familiar with his thinking, and has told aides that the media storm around Mr. Flynn would damage the president’s image on national security issues.

White House officials have begun discussing the possibility of replacements, and Mr. Trump is consulting Jim Mattis, the secretary of defense and a retired four-star general. Among the options are David H. Petraeus, the former C.I.A. director, and Thomas P. Bossert, the head of Mr. Trump’s domestic security council. Mr. Petraeus, also a retired four-star general, was forced out as the director of the C.I.A. because of an affair with his biographer, to whom he passed classified information. Mr. Petraeus would not need confirmation by the Senate as national security adviser.

Mr. Petraeus is expected to be at the White House on Tuesday, said a senior administration official who was not authorized to discuss the meeting and spoke on the condition of anonymity.

Mr. Flynn’s concealment of the call’s content, combined with questions about his management of his agency and reports of a demoralized staff, put him in a precarious position less than a month into Mr. Trump’s presidency.

Few members of Mr. Trump’s team were more skeptical of Mr. Flynn than the vice president, numerous administration officials said. Mr. Pence, who used the false information provided by Mr. Flynn to defend him in a series of television appearances, was incensed at Mr. Flynn’s lack of contrition for repeatedly embarrassing him by withholding the information, according to three administration officials familiar with the situation.

Mr. Flynn and Mr. Pence have spoken twice in the past few days about the matter, but administration officials said that rather than fully apologize and accept responsibility, the national security adviser blamed his faulty memory — which irked the typically slow-to-anger Mr. Pence.

The slight was compounded by an episode late last year when Mr. Pence went on television to deny that Mr. Flynn’s son, who had posted conspiracy theories about Hillary Clinton on social media, had been given a security clearance by the transition team. The younger Mr. Flynn had, indeed, been given such a clearance, even though his father had told Mr. Pence’s team that he had not.

Officials said classified information did not appear to have been discussed during the conversation between Mr. Flynn and the ambassador, which would have been a crime. The call was captured on a routine wiretap of diplomat’s calls, the officials said.

Former and current administration officials said that Mr. Flynn urged Russia not to retaliate against any sanctions because an overreaction would make any future cooperation more complicated. He never explicitly promised sanctions relief, one former official said, but he appeared to leave the impression that it would be possible.

During his 2015 trip to Moscow, Mr. Flynn was paid to attend the anniversary celebration of Russia Today, a television network controlled by the Kremlin. At the banquet, he sat next to Mr. Putin.

Mr. Flynn had notified the Defense Intelligence Agency, which he once led, that he was taking the trip. He received a security briefing from agency officials before he left, which is customary for former top agency officials when they travel overseas.

Still, some senior agency officials were surprised when footage of the banquet appeared on RT, and believed that Mr. Flynn should have been more forthcoming with the agency about the nature of his trip to Russia.

The next month, the agency’s director, Lt. Gen. Vincent Stewart, sent a memo to agency staff members saying agency officials should not provide briefings to former agency leaders during the presidential campaign.

James Kudla, an agency spokesman, said the memo was not directly the result of Mr. Flynn’s trip to Russia, but rather an effort by General Stewart to ensure that the agency was not becoming enmeshed in politics.

“Was the Russia trip one element of it? Yes,” he said. “But it was more broadly to ensure that other former senior officials and D.I.A. staff knew what the rules are to avoid the perception of taking sides.”

Defense officials said the White House would have to determine what penalty, if any, Mr. Flynn should face if he were found to have violated the Emoluments Clause. Capt. Jeff Davis, a Defense Department spokesman, declined to comment.

Correction: February 13, 2017
An earlier version of this article misstated the day on which the White House sent out a series of conflicting signals about Michael T. Flynn, the national security adviser. It was Monday, not Tuesday.