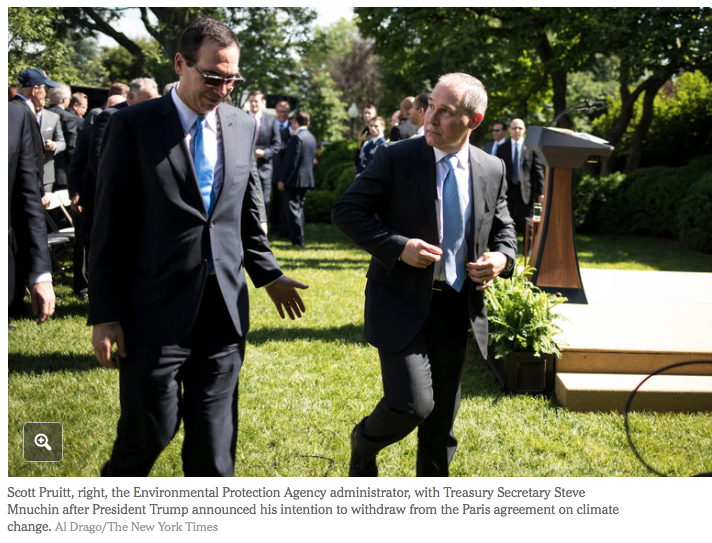 WASHINGTON — In the four months since he took office as the Environmental Protection Agency’s administrator, Scott Pruitt has moved to undo, delay or otherwise block more than 30 environmental rules, a regulatory rollback larger in scope than any other over so short a time in the agency’s 47-year history, according to experts in environmental law.

Mr. Pruitt’s supporters, including President Trump, have hailed his moves as an uprooting of the administrative state and a clearing of onerous regulations that have stymied American business. Environmental advocates have watched in horror as Mr. Pruitt has worked to disable the authority of the agency charged with protecting the nation’s air, water and public health.

But both sides agree: While much of Mr. Trump’s policy agenda is mired in legal and legislative delays, hampered by poor execution and overshadowed by the Russia investigations, the E.P.A. is acting. Mr. Pruitt, a former Oklahoma attorney general who built a career out of suing the agency he now leads, is moving effectively to dismantle the regulations and international agreements that stood as a cornerstone of President Barack Obama’s legacy.

“Just the number of environmental rollbacks in this time frame is astounding,” said Richard Lazarus, a professor of environmental law at Harvard. “Pruitt has come in with a real mission. He is much more organized, much more focused than the other cabinet-level officials, who have not really taken charge of their agencies. It’s very striking how much they’ve done.”

Since February, Mr. Pruitt has filed a proposal of intent to undo or weaken Mr. Obama’s climate change regulations, known as the Clean Power Plan. In late June, he filed a legal plan to repeal an Obama-era rule curbing pollution in the nation’s waterways. He delayed a rule that would require fossil fuel companies to rein in leaks of methane, a potent greenhouse gas, from oil and gas wells. He delayed the date by which companies must comply with a rule to prevent explosions and spills at chemical plants. And he reversed a ban on the use of a pesticide that the E.P.A.’s own scientists have said is linked to damage of children’s nervous systems.

In a sign of both Mr. Pruitt’s influence in the White House and the high regard in which Mr. Trump holds him, he will take a leading role in devising the legal path to withdraw from the 194-nation Paris agreement on climate change, a job that would typically fall to lawyers at the State Department. 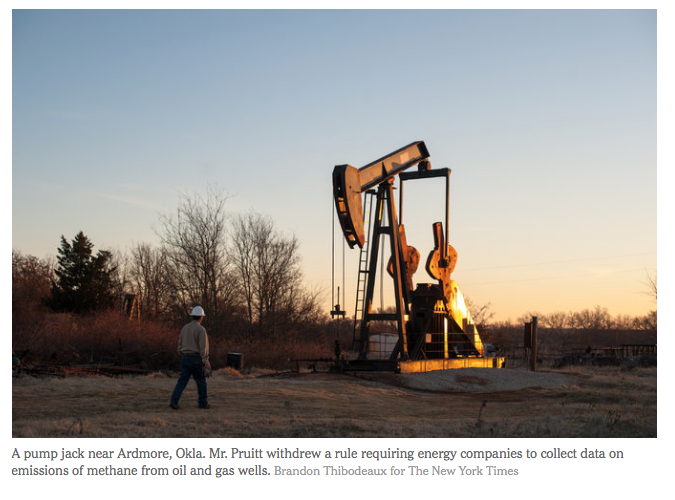 And he is doing all this largely without the input of the 15,000 career employees at the agency he heads, according to interviews with over 20 current and former E.P.A. senior career staff members.

“I have been consistently informed by multiple career people at E.P.A. that Administrator Pruitt is not meeting with them ahead of making decisions like rolling back these major regulations,” said James J. Jones, who had worked at the agency since the Reagan administration before retiring in January. Mr. Jones, an expert in chemical and pesticide pollution, was appointed by Mr. Obama as the E.P.A.’s assistant administrator for chemical safety in his final years at the agency.

Instead, Mr. Pruitt has outsourced crucial work to a network of lawyers, lobbyists and other allies, especially Republican state attorneys general, a network he worked with closely as the head of the Republican Attorneys General Association. Since 2013, the group has collected $4.2 million from fossil fuel-related companies like Exxon Mobil, Koch Industries, Murray Energy and Southern Company, businesses that also worked closely with Mr. Pruitt in many of the 14 lawsuits he filed against the E.P.A.

Within the agency, Mr. Pruitt relies on the counsel of a small network of political appointees, including a number of former lobbyists and senior industry officials. For example, he tapped Nancy Beck, previously a policy director for the American Chemistry Council, which lobbies on behalf of companies such as Dow and DuPont, to oversee the E.P.A. office charged with enforcing regulations on hazardous chemicals.

“It amounts to a corporate takeover of the agency, in its decision- and policy-making functions,” said Robert Weissman, the president of Public Citizen, a government watchdog group.

Mr. Pruitt, 49, sees himself as a champion of states’ rights, pressing to diminish the intrusive authority of an overbearing federal agency. Hanging near the fireplace on the wood-paneled walls of his office is a portrait of President James Monroe, who opposed ratifying the Constitution because he said it gave too much power to the federal government.

Mr. Pruitt pushed that message in his first speech to the agency’s staff. “Congress has been very prescriptive in providing, in many instances, a very robust role, an important role of the states,” he said. He did not mention public health or climate change.

Since then, Mr. Pruitt has begun what he calls his “back to basics” agenda for the E.P.A. — one that he has described to multiple people as an effort to rein in the regulatory efforts of the Obama era, which focused on invisible greenhouse gases from tailpipes and smokestacks. Instead, Mr. Pruitt has said, he wants to focus on “tangible” pollution — for example, the Superfund program, which cleans up hazardous waste at old industrial sites.

“I am making it a priority to ensure contaminated sites get cleaned up,” he said. “We will be more hands-on.” (His proposed budget for 2018, however, would cut the Superfund program by about 25 percent.)

Mr. Pruitt made his message explicit in a visit to the Harvey coal mine in Sycamore, Pa., to kick off a “back to basics” promotional tour in April.

“It’s sad that a regulatory body of the government of the United States would declare a war on any part of our economy,” he told the miners. “The regulatory assault is over.”

Attorney General Ken Paxton of Texas, who worked closely with Mr. Pruitt when he was Oklahoma’s attorney general to sue the E.P.A., said he was pleased that Mr. Pruitt’s new job hadn’t changed him. On March 1, Mr. Paxton met with Mr. Pruitt to request that the agency withdraw a rule requiring energy companies to collect data on emissions of methane from oil and gas wells. Mr. Paxton delivered the letter with the signatures of 11 attorneys general, laying out the case for walking back the rule. 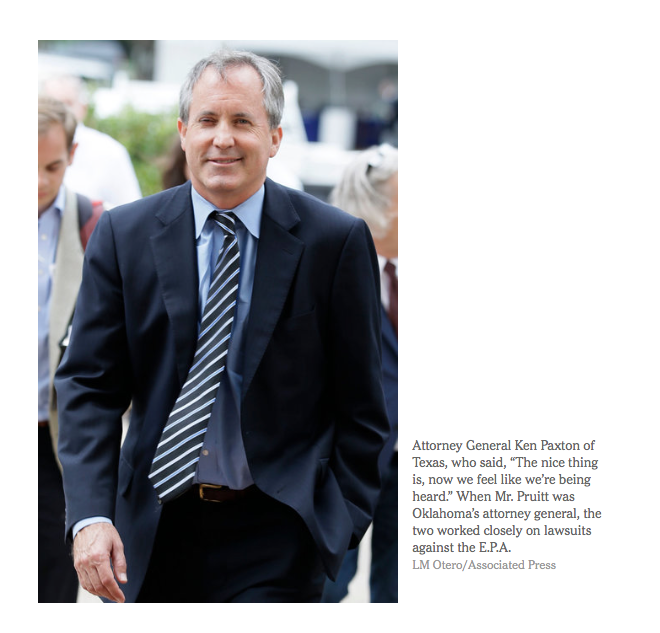 “I personally handed him the letter, and the next day the rule was personally withdrawn,” Mr. Paxton said.

Meanwhile, the agency’s career scientists and legal experts say they have been largely cut out of the process. Senior staff members with decades of experience in environmental law and science said they had been consulted rarely on the agency’s major decisions to undo environmental protections.

It is not unusual for E.P.A. administrators to consult with lobbyists, state officials, and industry and advocacy groups as they develop major policy proposals. But veteran E.P.A. employees say Mr. Pruitt has gone much further in cutting out career staff members.

“Going back to the Reagan administration, I was never aware of a substantive decision made without input from career staff,” said Mr. Jones, the former head of the E.P.A.’s chemical regulation office. “It’s hard to imagine that you have all the relevant facts if you’re not meeting with the people who have a greater depth of knowledge on these issues than almost anyone in the country.”

Some career E.P.A. employees said they had been consulted, particularly in the writing of legal language to execute Mr. Pruitt’s agenda. After Mr. Pruitt drafted his plan to repeal Mr. Obama’s rule on pollution in the nation’s waterways, he turned to the E.P.A.’s legal office to help ensure the language was bulletproof, said Kevin Minoli, the agency’s acting general counsel.

“As lawyers, it’s not our job to choose the ultimate policy decision,” said Mr. Minoli, who has served as an E.P.A. lawyer since the end of the Clinton administration. “As lawyers, our job is to help articulate the policy in the most legally defensible way possible.” 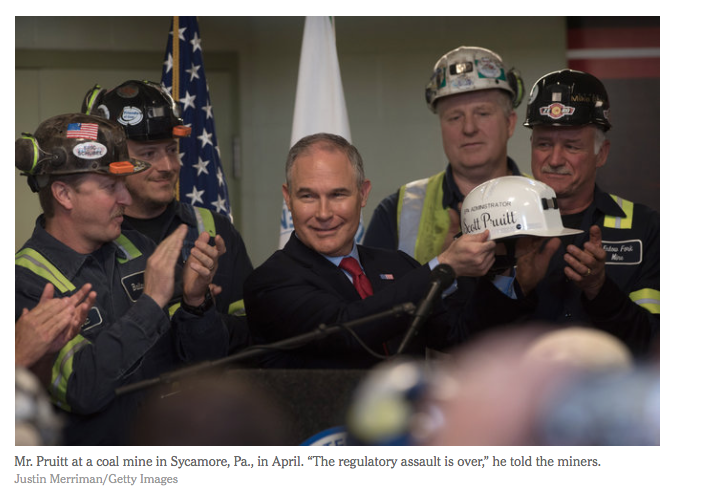 But Mr. Pruitt’s main source of counsel on industry regulations appears to be the industries he regulates. An excerpt from his calendar for Feb. 21 to March 31, acquired through the Freedom of Information Act by the energy trade publication E & E News, details multiple meetings with chief executives and lobbyists from oil, gas, chemical, agribusiness and other industries regulated by the E.P.A., as well as with Mr. Pruitt’s personally appointed political staff — but few meetings with career employees or environmental groups.

But the influence of those groups, which have pushed to retain environmental rules, appears to be outweighed by the counsel of industry groups.

Dow Chemical Company had pushed the E.P.A. to reconsider an Obama-era ban on the use of chlorpyrifos, a pesticide that the E.P.A.’s scientists have concluded causes developmental damage in children. On March 30, Mr. Pruitt reversed the ban.

On March 13, Mr. Pruitt met with agriculture lobbyists, including Dale Moore, executive director of the American Farm Bureau Federation, which has lobbied heavily for the repeal of an Obama-era regulation that could restrict the use of fertilizers near waterways. Last month, Mr. Pruitt filed a draft plan to repeal the Waters of the United States Rule.

On March 22, he had dinner at the Trump International Hotel in Washington with 45 members of the board of directors of the American Petroleum Institute, a body composed largely of chief executive officers of the oil and gas industry. At the time, oil and gas companies were pushing the E.P.A. to roll back a set of rules on methane leaks from drilling wells, which the industry estimates could cost it over $170 million.

On June 13, Mr. Pruitt filed a proposal to delay those regulations by two years, and the agency is expected to rewrite them. In the filing, he noted that the E.P.A. had concluded that a delay of the pollution rules “may have a disproportionate effect on children.” But he also said the rules would come at a significant cost to the oil and gas industry.

“The nice thing is,” Mr. Paxton, the attorney general of Texas, said, “now we feel like we’re being heard.”v

Correction: July 2, 2017
An earlier version of this article referred incorrectly to a meeting between the Environmental Protection Agency administrator, Scott Pruitt, and Andrew Liveris, the chief executive of the Dow Chemical Company. While the meeting was originally scheduled for March 9 at an energy conference in Houston, spokespeople for both the E.P.A. and Dow said it was later canceled and did not take place.