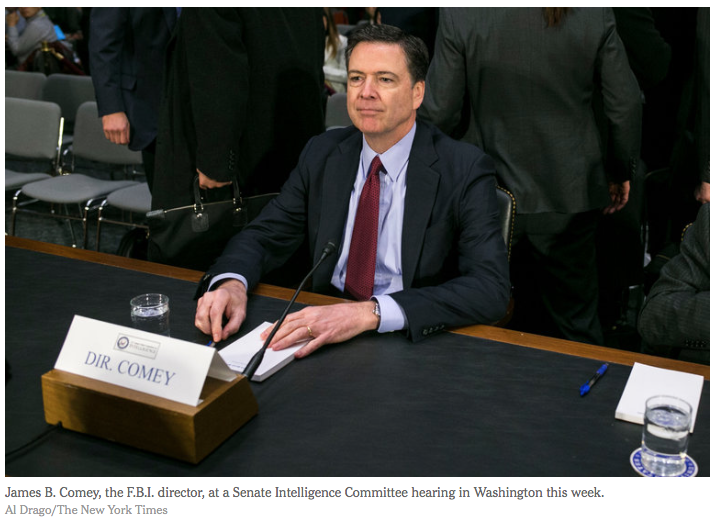 WASHINGTON — The Justice Department’s inspector general said Thursday that he would open a broad investigation into how the F.B.I. director, James B. Comey, handled the case over Hillary Clinton’s emails, including his decision to discuss it at a news conference and to disclose 11 days before the election that he had new information that could lead him to reopen it.

The inspector general, Michael E. Horowitz, will not look into the decision not to prosecute Mrs. Clinton or her aides. But he will review actions Mr. Comey took that Mrs. Clinton and many of her supporters believe cost her the election.

They are: the news conference in July at which he announced he was not indicting Mrs. Clinton but described her behavior as “extremely careless”; the letter to Congress in late October in which he said that newly discovered emails could potentially change the outcome of the F.B.I.’s investigation; and the letter three days before the election in which he said that he was closing it again.

The inspector general’s office said that it was initiating the investigation in response to complaints from members of Congress and the public about actions by the F.B.I. and the Justice Department during the campaign that could be seen as politically motivated.
For Mr. Comey and the agency he heads, the Clinton investigation was politically fraught from the moment the F.B.I. received a referral in July 2015 to determine whether Mrs. Clinton and her aides had mishandled classified information. Senior F.B.I. officials believed there was never going to be a good outcome, since it put them in the middle of a bitterly partisan issue.

Whatever the decision on whether to charge Mrs. Clinton with a crime, Mr. Comey, a Republican former Justice Department official appointed by President Obama, was going to get hammered. And he was.

Republicans, who made her use of a private email server a centerpiece of their campaign against Mrs. Clinton, attacked Mr. Comey after he decided there was not sufficient evidence she had mishandled classified information to prosecute her.

The Clinton campaign believed the F.B.I. investigation was overblown and seriously damaged her chances to win the White House and resented Mr. Comey’s comments about Mrs. Clinton at his news conference. But the campaign was particularly upset about Mr. Comey’s two letters, which created a wave of damaging news stories at the end of the campaign, when Mrs. Clinton and her supporters thought they had put the email issue behind them.

In the end, the emails that the F.B.I. reviewed — which came up during an unrelated inquiry into Anthony D. Weiner, the estranged husband of a top Clinton aide, Huma Abedin — proved irrelevant to the investigation’s outcome. 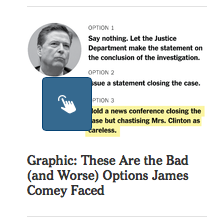 F.B.I. officials said Thursday that they welcomed the scrutiny. In a statement, Mr. Comey described Mr. Horowitz as “professional and independent” and promised to cooperate with his investigation. “I hope very much he is able to share his conclusions and observations with the public because everyone will benefit from thoughtful evaluation and transparency,” Mr. Comey said.

Brian Fallon, the former press secretary for the Clinton campaign and the former top spokesman for the Justice Department, said the inspector general’s investigation was long overdue.

“This is highly encouraging and to be expected, given Director Comey’s drastic deviation from Justice Department protocol,” he said. “A probe of this sort, however long it takes to conduct, is utterly necessary in order to take the first step to restore the F.B.I.’s reputation as a nonpartisan institution.”

Mr. Horowitz has the authority to recommend a criminal investigation if he finds evidence of illegality, but there has been no suggestion that Mr. Comey’s actions were unlawful. Rather, the question has been whether he acted inappropriately, showed bad judgment or violated Justice Department guidelines. It is not clear what the consequences would be for Mr. Comey if he was found to have done any of those things.

The Justice Department and the F.B.I. have a longstanding policy against discussing criminal investigations. Another Justice Department policy declares that politics should play no role in investigative decisions. Both Democratic and Republican administrations have interpreted that policy broadly to prohibit taking any steps that might even hint at an impression of partisanship.

Inspectors general have investigated F.B.I. directors before, but rarely. The most high-profile example was the investigation of William S. Sessions, who was fired by President Bill Clinton after an internal inquiry cited him for financial misconduct. In recent years, the inspector general has investigated accusations of wrongdoing by the F.B.I. involving some of its most sensitive operations, including a number of surveillance and counterterrorism programs.

As part of the review, the inspector general will examine other issues related to the email investigation that Republicans have raised. They include whether the deputy director of the F.B.I., Andrew G. McCabe, should have recused himself from any involvement in it.

In 2015, Mr. McCabe’s wife ran for a State Senate seat in Virginia as a Democrat and accepted nearly $500,000 in political contributions from Gov. Terry McAuliffe, a key ally of the Clintons. Though Mr. McCabe did not assume his post until February 2016, months after his wife was defeated, critics both within the agency and outside of it felt that he should have recused himself.

The F.B.I. has said Mr. McCabe played no role in his wife’s campaign. He also told his superiors she was running and sought ethics advice from F.B.I. officials.

Mr. Horowitz said he would also investigate whether the Justice Department’s top congressional liaison, Peter Kadzik, had improperly provided information to the Clinton campaign. A hacked email posted by WikiLeaks showed that Mr. Kadzik alerted the campaign about a coming congressional hearing that was likely to raise questions about Mrs. Clinton.

Investigators will be helped in gathering evidence by a law that Congress passed just last month, which ensures that inspectors general across the government will have access to all relevant agency records in their reviews.

The law grew out of skirmishes between the F.B.I. and the Justice Department inspector general over attempts by the F.B.I. to keep grand jury material and other records off limits. The new law means Mr. Horowitz’s investigators should have access to any records deemed relevant.

Mr. Trump has not indicated whether he intends to keep Mr. Comey in his job. When he cleared Mrs. Clinton of criminal wrongdoing during the campaign, Mr. Trump accused him of being part of a rigged system.

Although the president does not need cause to fire the F.B.I. director, a critical inspector general report could provide justification to do so if Mr. Trump is looking for some.

Adam Goldman and Matt Apuzzo reported from Washington, and Eric Lichtblau from Baltimore.