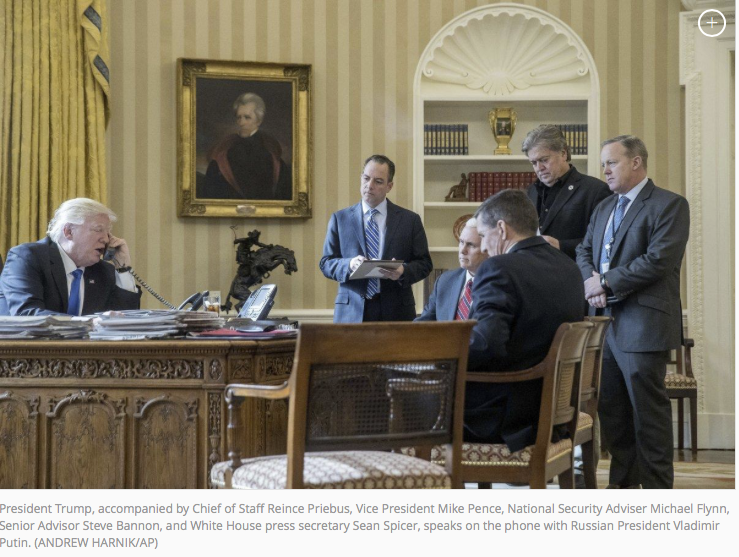 President Trump chatted with Vladimir Putin Saturday, his first known conversation since taking office with the Russian leader he frequently complimented on the campaign trail.

White House press secretary Sean Spicer tweeted a photo of Trump on the phone in the Oval Office just after noon Saturday.

“@POTUS is now onto his 3rd of 5 head of government calls, speaking w Russian Pres Putin,” he tweeted, adding that Trump wrapped up a 45-minute call with German Chancellor Angela Merkel before phoning the Kremlin. 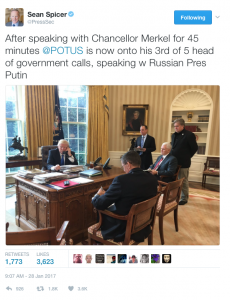 The image appeared to show Trump looking at an issue of “Time” magazine that featured himself on the cover as the “Person of the Year.”

A gaggle of White House staffers — Vice President Pence, Chief of Staff Reince Priebus, National Security Adviser Michael Flynn and Chief Strategist Steve Bannon — were in the room when Trump made the call.

It is not clear what the two presidents talked about.

Trump has said he’s open to cooperating with Russia if it helps further American interests abroad. Before the call, Trump was noncommittal about whether he was considering lifting economic sanctions imposed on Moscow by the Obama administration. 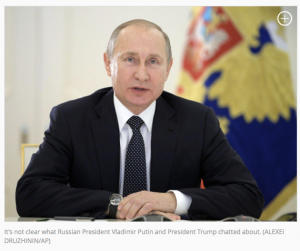 The Saturday chat marked the first known time that Trump and Putin have talked since Trump’s Jan. 20 inauguration.

Trump has long admired the Russian ruler, showering him with compliments long before he entered the race for the White House. In 2007, Trump said Putin was going a “great job” and in 2011, he added that he respects Putin’s intelligence.

He kept up the fawning on the campaign trail, praising Putin’s leadership skills.

Putin returned the flattery during the 2016 race, calling Trump a “talented person” and saying he is “the absolute leader of the presidential race.”