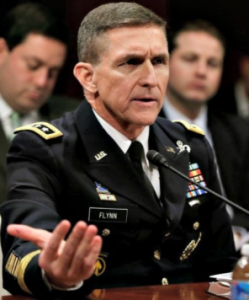 The finding, first reported by The Washington Post, contradicts Flynn’s previous account of the incident, in which he told the newspaper in August that he had permission to share the material.

The documents, obtained by the Post under the Freedom of Information Act, do not describe what Flynn shared or with whom while he was the top military intelligence officer in Afghanistan. The Post said the material had to do with CIA activities.

In an interview with The Post in August, Flynn acknowledged that he had been investigated for giving classified information to British and Australian officials — America’s closest allies — serving in Afghanistan alongside U.S. forces.

Flynn defended his actions and said he did nothing wrong: “That was substantiated because I actually did it. But I did it with the right permissions when you dig into that investigation. I’m proud of that one. Accuse me of sharing intelligence in combat with our closest allies, please.”

The Army documents say the investigation determined that Flynn did not have permission to share the secrets.

The Defense Department’s inspector general’s office, which conducted an independent review of the investigation, came to the same conclusion, the documents state.

The investigation concluded that he did not act “knowingly” and that “there was no actual or potential damage to national security as a result.”

It also points out that no disciplinary action was taken against Flynn.

The Army investigation was ordered by the head of U.S. Central Command, whose commander at the time was retired Marine Gen. James Mattis, Trump’s pick to be defense secretary.