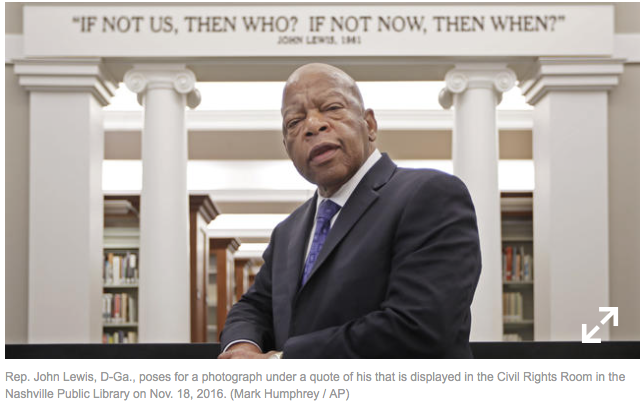 Unwilling to let criticism pass, Donald Trump on Saturday pilloried as “all talk … no action” national icon John Lewis, who was repeatedly beaten by police and nearly lost his life during protests in the long struggle for civil rights.

Trump’s Twitter comments about the Georgia congressman came in response to Lewis’ assertion in an interview Friday that he did not see Trump as a “legitimate” president because of Russian involvement in the defeat of his opponent, Hillary Clinton.

The president-elect’s comments were rife with irony. At the start of  a weekend dedicated to the Rev. Martin Luther King Jr., Trump was using his potent social media platform to hurl insults at a civil rights leader. And the trigger for the outburst was doubt being raised about Trump’s legitimacy, even after Trump himself led a more than five-year effort to delegitimize President Obama by falsely claiming that he was foreign born.

Trump also used racially freighted language when he said that Lewis’ Atlanta district was “crime infested” and “falling apart.” The district, which is mostly African American, includes many of the Atlanta area’s most prominent neighborhoods. 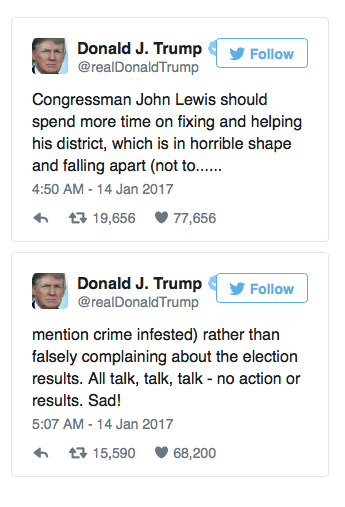 The furor, along with continued investigations into the Russian activities, threatened to mar a period during which an incoming president would traditionally want to unify the nation. Trump will be inaugurated on Friday.

The back-and-forth began with the release of part of an interview for NBC’s “Meet the Press” in which anchor Chuck Todd asked Lewis if he would try to work with Trump despite their political differences.

“I believe in forgiveness. I believe in trying to work with people. It’s going to be hard,” Lewis said. “I don’t see the president-elect as a legitimate president.”

The veteran Democrat said he believed “the Russians participated” in Trump’s election and added: “They helped destroy the candidacy of Hillary Clinton.” As a result, he said, he would not attend Trump’s inauguration.

Lewis is among a handful of congressional lawmakers to announce they will not attend the inauguration, but the first to be called out by Trump. Lewis had already emerged as a high-profile Trump opponent on Capitol Hill; on Wednesday he appeared before a Senate committee to urge that it turn aside Trump’s designation of Sen. Jeff Sessions (R-Ala.) as his attorney general.

“Congressman John Lewis should spend more time on fixing and helping his district, which is in horrible shape and falling apart (not to mention crime infested) rather than falsely complaining about the election results. All talk, talk, talk – no action or results. Sad!” Trump tweeted Saturday.

Trump’s assessment does not match Lewis’ district. It is home to Atlanta’s airport and upscale neighborhoods; it houses corporate headquarters like those of Coca-Cola and Delta Air Lines.

Most of the area’s many colleges and universities are situated in the 5th District, where the average annual household income is $73,000. The area is at the national average for college degrees, if somewhat higher on measures of poverty and unemployment.

Trump’s transition team did not immediately elaborate on the basis for Trump’s statement.

About 12 hours after his initial communication, Trump added another tweet: “Congressman John Lewis should finally focus on the burning and crime infested inner-cities of the U.S. I can use all the help I can get!”

Trump’s assessment also does not reflect the views of Lewis, a nearly universally admired figure of moral authority in a Capitol usually divided by partisanship. Even among those who disagreed with Lewis’ criticism of Trump, there was shock at the president-elect’s decision to hit back at someone of his stature. 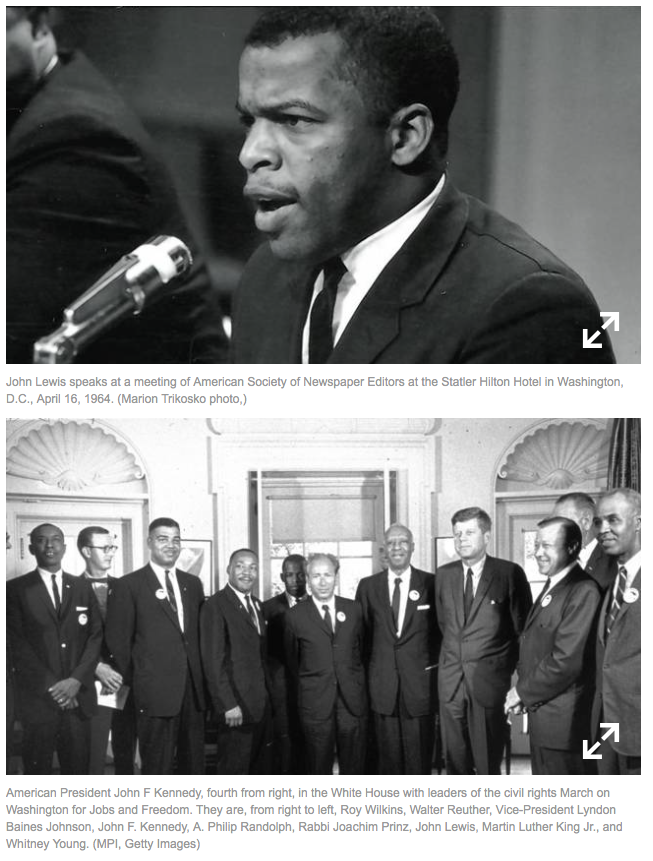 Lewis was the youngest speaker at the 1963 March on Washington, by then already a central figure in the efforts of African Americans to secure civil rights. For years, he was repeatedly arrested and beaten at Southern protests.

In 1965, during the celebrated “Bloody Sunday” march at the Edmund Pettus bridge in Selma, Ala., Lewis was clubbed so severely that he suffered a skull fracture. He recovered and led other protests, and 30 years ago he was elected to Congress.

“Generations from now, when parents teach their children what is meant by courage, the story of John Lewis will come to mind — an American who knew that change could not wait for some other person or some other time; whose life is a lesson in the fierce urgency of now,” Obama said as he presented the award.

In 2015, Obama joined Lewis and other civil rights veterans for a 50th anniversary walk over the bridge where Lewis was wounded.

Trump’s remarks were reminiscent of his summer attack on a Gold Star family who spoke against him at the Democratic convention. In that case, as seemed to occur Saturday, Trump made assumptions based on the people he was criticizing.

After Khizr Khan criticized Trump from the convention stage, his wife standing silently by his side, Trump suggested that she had not been allowed to speak. She and her husband later said that she was too distraught to speak as the convention displayed a picture of her son, Army Capt. Humayun Khan, who died in a 2004 car bombing in Iraq while trying to save his fellow soldiers.

“John Lewis is an icon of the civil rights movement who is fearless in the pursuit of justice and equality,” tweeted Sen. Kamala Harris, the California Democrat. “He deserves better than this.”

Sen. Ben Sasse, a Republican from Nebraska who has long disagreed with the president-elect, tweeted a reproach to Trump: “John Lewis and his ‘talk’ have changed the world.” Earlier, Sasse had implored Lewis to attend the inauguration to celebrate the “peaceful transfer of power.”

“It’s telling, I’m afraid, that Donald Trump treats Vladimir Putin with more respect than he does John Lewis,” tweeted Bill Kristol, the founder and editor-at-large of the Weekly Standard and a former aide to Republican Vice President Dan Quayle.

Added John Feehery, a veteran aide to Republican members of Congress: “Picking a fight with John Lewis is stupid. If you don’t like what he says, ignore him.”