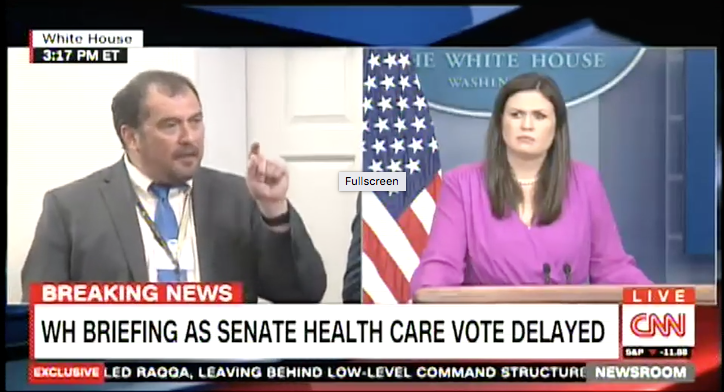 Press Secretary Sarah Huckabee Sanders told the White House press corps to watch a video, “whether it’s accurate or not,” from conservative provocateur James O’Keefe on Tuesday — and a Playboy correspondent rose to the media’s defense.

CLICK IMAGE above for direct link to VOX story & video.

The sequence of events started when deputy press secretary Sarah Huckabee Sanders was tossed a softball question from Charlie Spiering of Breitbart, a right-wing website. Spiering asked about the recent controversy at CNN, which recently published and retracted a story alleging that the Senate was investigating a meeting between a top Trump campaign staffer and an official from a Russian investment fund. The mistake caused three CNN employees involved with the story — including Pulitzer Prize-winning reporter Eric Lichtblau — to step down Monday.

“The president went on Twitter this morning and repeated that CNN was fake news,” Spiering said. “Why wasn’t [CNN’s] response good enough for the president?”

Sanders took this as an opportunity to restate her complaints about the mainstream media. She also told reporters to watch a video from ambush artist James O’Keefe, which shows a CNN producer criticizing his own channel’s treatment of the Trump-Russia story. That producer, John Bonifield, works on CNN’s health team and does not appear to be connected to CNN’s political coverage. (It also seems that Bonifield was taped without his knowledge, a major ethics violation.)

“There’s a video circulating now — whether it’s accurate or not, I don’t know — but I would encourage everybody in this room, and frankly everybody across this country, to take a look at it,” Sanders said. “I think if it is accurate, it is a disgrace to all of media, all of journalism.”

I think we have gone to a place where if the media can’t be trusted to report the news, then that’s a dangerous place for America. And I think if that’s the place where certain outlets are going, particularly for the purpose of spiking ratings, and if that’s coming directly from the top, then I think that’s even more scary, and certainly more disgraceful.

Sanders went on to scold the media for using unnamed sources, when a reporter — apparently Brian J. Karem, a correspondent for Playboy — interrupted her with a sharply worded rebuttal:

Come on, you’re inflaming everybody right here, right now, with those words. This administration has done that as well. Why in the name of heaven — any one of us are replaceable, and any one of us, if we don’t get it right, the audience has the opportunity to turn the channel or not read us.

You have been elected to serve for four years at least. There is no option other than that. We’re here to ask you questions. You’re here to provide the answers. And what you just did is inflammatory to people all over the country who look at it and say, “See, once again, the president is right and everybody else out here is fake media.” And everybody out here is only trying to do their job.

Sanders responded coolly. “I think if anything has been inflamed, it’s the dishonesty that often takes place by the news media,” she said.