From Russia with a plan: After his press conference, why Donald Trump called the media, “The enemy of the American people.” 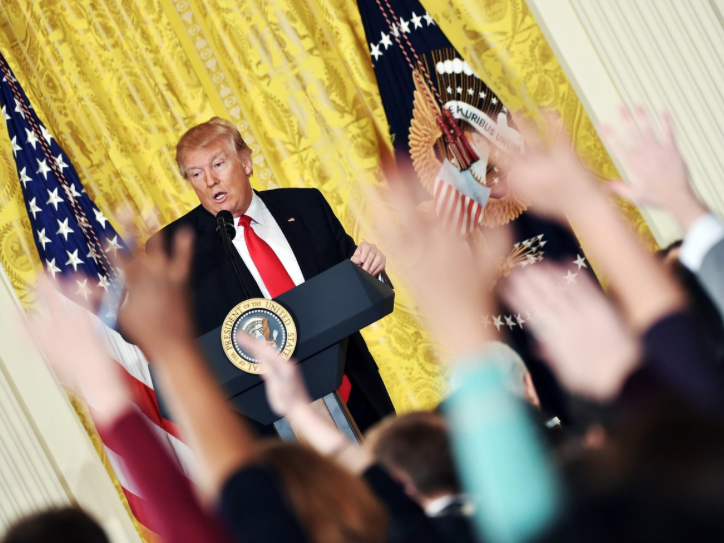 During his rambling, seventy-seven minute press conference Thursday the 45th President of the United States ricocheted between boasting (once again) about his November victory, by blatantly misstating his electoral vote ranking, to describing his month-old chaos presidency as a “finely tuned machine,” to assuring reporters in the East Room that he’d been “briefed” and if the U.S. & Russia ever threw down in a nuclear exchange, the “holocaust would be like no other.”

That was one truth even his son Barron surely knows without having to consult a PDB.

The holocaust line and his musing that “lots of things are done with uranium including …bad things,” were among many “Dr. Strangelove” moments in that jaw-dropping shoot-from-the-hip performance.

On CNN Jake Tapper called it “wild” and “unhinged.” Presidential historian Douglas Brinkley described it as “bizarre theater.” Even Shepard Smith on Trump-friendly Fox News characterized his repeated misstatements of fact as, “crazy.” 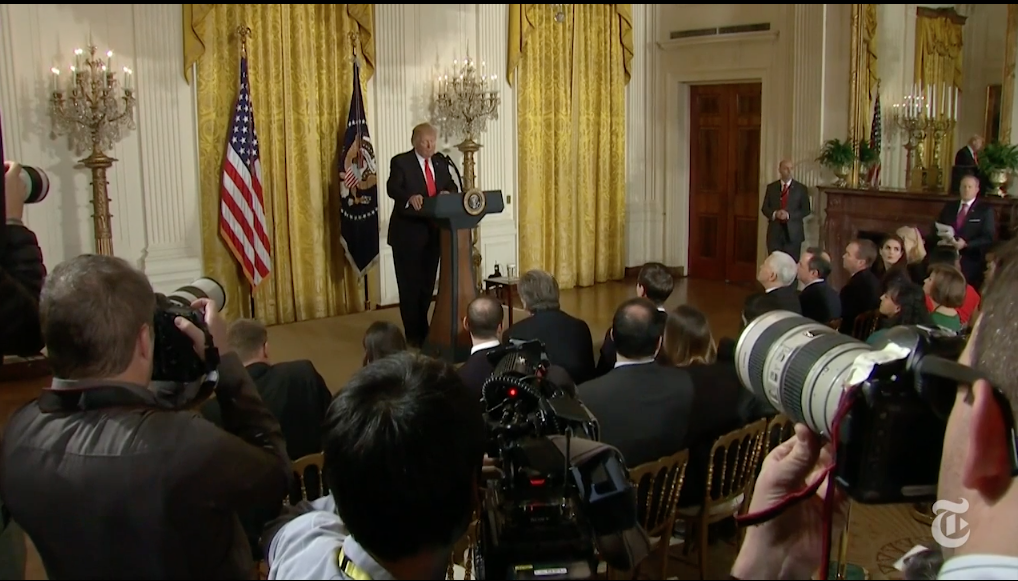 Never one to hide his light under a basket, the President began by crowing over “the incredible progress that has been made in the last four weeks since my inauguration… I don’t think there’s ever been a president elected who, in this short period of time, has done what we’ve done.”

Certainly there’s never been one who has shredded the truth with such audacity.

-His travel ban threw airports into gridlock until it was flatly rejected by the Ninth Circuit, But on Thursday Mr. Trump called the “rollout” of his executive order, “very smooth;” in fact, “perfect.”

-He fired National Security Advisor Michael Flynn Tuesday after he lied to the Vice President about the content of his calls to the Russian ambassador, but now he insisted that “what (Flynn) did wasn’t wrong.”

-When April Ryan, a veteran African American reporter, asked him if his plans to rework the “inner cities” included getting input from The Congressional Black Caucus, the President asked, “Are they friends of yours? Set up a meeting;” as if he subscribed to the old stereotype that “every black person knows every other black person.”

“THE LEAKS ARE REAL. THE NEWS IS FAKE”

Continually questioned by reporters about disclosures in Tuesday’s New York Times that a number of his campaign aides had repeated contacts with the Russians, at a time when the U.S. intel community says they were hacking the election in his favor, Mr. Trump responded that “the whole Russian thing (is) a ruse.”

“You can talk all you want about Russia,” he said, calling it a “fake news, fabricated deal, to try and make up for the loss of the Democrats.”

In a classic cut-off-the-head-of-the-messenger” move, he then insisted that the real problem in this Russian scandal was the continuing disclosures to the press. The leaks.

“Those are criminal,” he said, “I’ve actually called the Justice Department to look into” them.

When asked if they were just “fake news or… real leaks,” he responded, “Well the leaks are real… absolutely real. The news is fake, because so much of the news is fake.”

When pressed on whether his administration’s relationship with the Kremlin might be too cozy as a result of his own dealings with Moscow, Mr. Trump insisted flatly, “I own nothing in Russia. I have no loans in Russia. I don’t have any deals in Russia.”

But in the two months since we’ve used this website to curate the best investigative reporting on the Trump election, transition and presidency, we’ve assembled more than 100 articles proving that Donald Trump has had dozens of business relationships here and abroad with interests from The Russian Federation – many dating back to the early 2000’s.

He’s been in multi-million dollar deals with oligarchs and Russian gangsters; some of which could have produced the kind of kompromat that Vladimir Putin, an ex-KGB Lieutenant Colonel, could use to lean on the U.S. President. 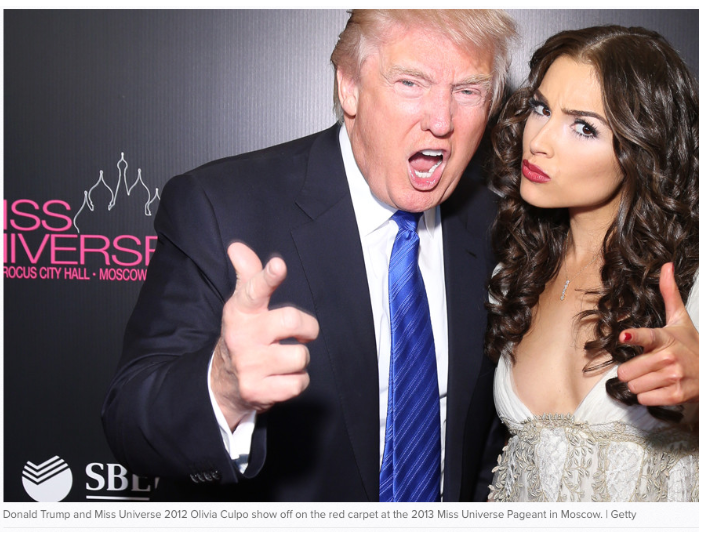 His production of The Miss Universe contest in Moscow three years ago was far from Donald Trump’s only contact in his tenacious pursuit of business in the former U.S.S.R.

It’s no wonder that after getting such relentless questioning from reporters on the Russian issue, which the DOJ and congressional committees are now investigating, Mr. Trump lashed out at the media Friday with a series of Tweets aimed at the press.

ENEMY OF THE PEOPLE

Just after arriving at his Mar-a-Lago weekend retreat in Palm Beach, Mr. Trump Tweeted, “The FAKE NEWS media (failing @nytimes, @CNN, @NBC News and many more)   is not my enemy, it is the enemy of the American people. SICK!”

Then, 16 minutes later, apparently deciding to expand the objects of his vitriol to include two more network news organizations – ABC and CBS – he deleted the word “SICK.”

Now the message read, “The FAKE NEWS media (failing @nytimes, @NBC News @ABC, @CBS, @CNN) is not my enemy, it is the enemy of the American people!”

Carl Bernstein, who doggedly investigated the Watergate scandal with Bob Woodward for The Washington Post, and who later served as the D.C. Bureau Chief for ABC News, was quoted in The NYT as saying, “Donald Trump is demonstrating an authoritarian attitude and inclination that shows no understanding of the role of the free press.”

That Times piece recounted how President Nixon, forced to resign over the Watergate cover-up, famously told his own National Security Advisor Henry Kissinger in 1972 that, “The Press is the enemy.”

It wasn’t the first time that Donald Trump had taken a page from the Nixon playbook, as I noted in an article for The Huffington Post filed on New Year’s Day.

But two weeks later in another HuffPost I identified the real role model that the President and his chief strategist Steve Bannon are channeling day-by-day as they put the U.S. media on the same level as a network of Kremlin hackers and spooks. 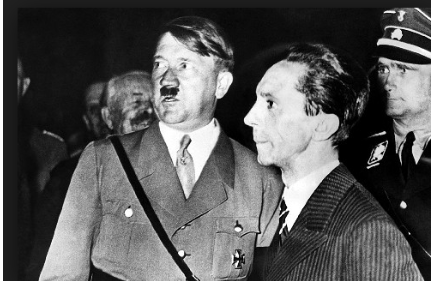 “If you tell a lie big enough and keep repeating it,” Goebbels wrote, “people will eventually come to believe it. The lie can be maintained only for such time as the State can shield the people from the political, economic and/or military consequences of the lie. It thus becomes vitally important for the State to use all of its powers to repress dissent, for the truth is the mortal enemy of the lie, and thus by extension, the truth is the greatest enemy of the State.”

So if any of you are wondering why, after his buffoon-like performance on Thursday, Donald Trump started The President’s Day weekend by drawing down on “the media,” understand that the real protectors of the state are the reporters who work each day to rip the lid off corruption, hypocrisy and yes – even treason.

Goebbels, was right, “the truth is the mortal enemy of the lie. And in an administration that is nourished by falsehood at every level, the media is the best hope that “the American people” will get through this presidency with their democracy intact.

From Russia with a plan: After his press conference, why Donald Trump called the media, “The enemy of the American people.” added by Peter Lance on February 18, 2017
View all posts by Peter Lance →