Democratic congressmen on the House Judiciary Committee want to know why Attorney General Jeff Sessions abruptly settled a money laundering case in May involving the same Russian attorney who met with Donald Trump Jr. during the presidential election to offer “dirt” on Democratic candidate Hillary Clinton.

CLICK IMAGE ABOVE for direct link to piece in foreign policy.com

The civil forfeiture case was filed in 2013 by Preet Bharara, the former U.S. Attorney for the Southern District of New York — who was fired by Trump in March. The case alleged that 11 companies were involved in a tax fraud in Russia and then laundered a portion of the $230 million they got into Manhattan real estate.

The forfeiture case was heralded at the time as “a significant step towards uncovering and unwinding a complex money laundering scheme arising from a notorious foreign fraud,” Bharara said. “As alleged, a Russian criminal enterprise sought to launder some of its billions in ill-gotten rubles through the purchase of pricey Manhattan real estate.” 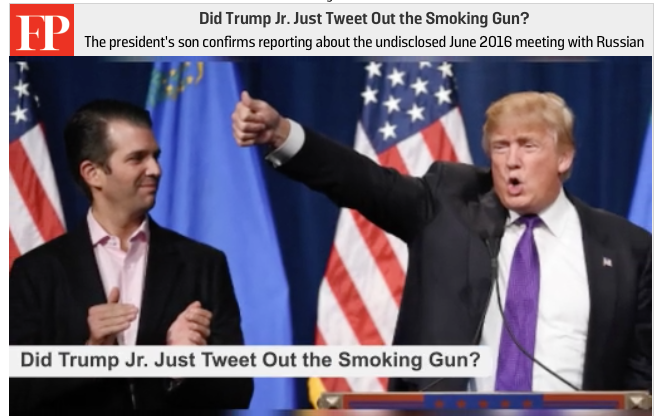 But Instead of proceeding with the trial as scheduled, the Trump Justice Department settled the case two days before it was due to begin. By then, Bharara had already been axed by the president. Bharara’s assistant did not immediately respond to request for comment.

“We write with some concern that two events may be connected—and that the Department may have settled the case at a loss for the United States in order to obscure the underlying facts,” wrote 17 Democratic Congressmen on the House judiciary panel in a letter to Sessions on Wednesday.

The Russian attorney who uncovered the tax fraud scheme, Sergei Magnitsky, mysteriously died in prison. As a result, U.S. lawmakers passed the Magnitsky Act, which levied sanctions on Russian officials—sanctions that Natalia Veselnitskaya, a Russian attorney, worked to reverse.

Also the attorney representing the Russian companies in the DOJ case, Veselnitskaya, is the same one who organized a meeting with Donald Trump, Jr. and top Trump campaign officials in June 2016 to offer material that could “incriminate” Democratic presidential candidate Hillary Clinton. “Love it,” responded Trump, Jr. to an intermediary.

Though been painted as a “Kremlin attorney”, Veselnitskaya does not necessarily work directly for the Russian government. She claims she has some high-level government clients.

According to emails published by Donald Trump Jr., Veselnitskaya had evidence of Clinton wrongdoing that she was offering on behalf of the Kremlin as “part of Russia and its government support for Mr. Trump.” The emails exchanged by Trump’s son and an intermediary also noted that Veselnitskaya was “in court” at the time and needed to push back the meeting. She was working on the civil forfeiture case that Sessions would eventually shutter.

In May, the Justice Department settled the case for $6 million instead of $230 million and did not demand any admission of wrongdoing. According to the lawmakers’ letter to Sessions, Veslnitskaya was surprised by how generous the settlement was, telling one Russian news outlet the penalty appeared like “an apology from the government.”

While the Congressmen didn’t cite any evidence that the two events are definitely related, they sent Sessions a laundry list of questions. They want to know if there was any contact between members of the Trump administration or campaign and the Department of Justice or the Russian attorney about the case.