Daily Beast: Devin Nunes Vanished the Night Before He Made Trump Surveillance Claims

The Republican intelligence chairman got a message and jumped out of an Uber. The next morning he dropped a bombshell based on classified information. 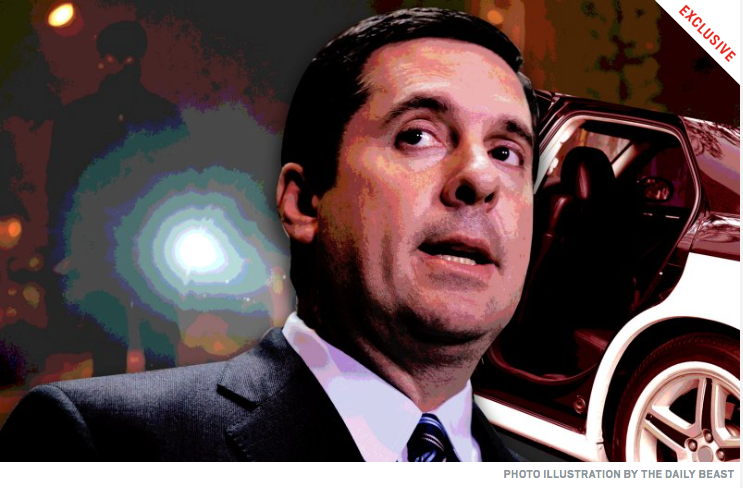 Hours before the chairman of the House Intelligence Committee announced his shocking claims about surveillance of the Trump transition team on Wednesday morning, he practically disappeared.

Rep. Devin Nunes was traveling with a senior committee staffer in an Uber on Tuesday evening when he received a communication on his phone, three committee officials and a former national security official with ties to the committee told The Daily Beast. After the message, Nunes left the car abruptly, leaving his own staffer in the dark about his whereabouts.

By the next morning, Nunes hastily announced a press conference. His own aides, up to the most senior level, did not know what their boss planned to say next. Nunes’ choice to keep senior staff out of the loop was highly unusual.

The Republican chairman had a bombshell to drop.

Nunes reviewed “dozens of reports” produced by the U.S. intelligence community that showed this, he added. Though the surveillance was done legally, Nunes said he was “alarmed” that information about transition officials was widely disseminated throughout the government, and that in some cases their names were “unmasked,” meaning not hidden as is usually the case when when a U.S. person’s information is collected through foreign surveillance.

Immediately after the press conference, Nunes went to the White House to brief the president. Afterwards, Trump said he felt “somewhat” vindicated by the briefing for his false claim that President Obama “wiretapped” him during the election. (Nunes has maintained this is not true.)

Asked to explain why he decided to brief the president, Nunes told Sean Hannity on Thursday he had done so because the information concerned him and that the president was receiving criticism from the press.

“It’s clear that I would be concerned if I was the president, and that’s why I wanted him to know, and I felt like I had a duty and obligation to tell him because, as you know, he’s taking a lot of heat in the news media,” Nunes said.

Democrats and Republicans were taken by surprise by Nunes’ actions.

Rep. Adam Schiff, the top Democrat on the House Intelligence Committee, hinted at the unusual circumstances Friday during a press conference, criticizing the chairman for “what appears to be a dead of night excursion.” It appears Schiff was being literal.

“I’m the only one who’s seen the documents, as far as I know,” Nunes said Friday.

“There’s all kinds of speculation like this floating around about his source, his whereabouts, the circumstances of his announcement, etc. I’m not going to comment on it,” his spokesman said.

Where Nunes went and who his source was for this information—which he said was still incomplete—is now a mystery with serious repercussions for the independence of his investigation into Russian interference with U.S. elections.

“This information was legally brought to me by sources who thought that we should know it,” Nunes added.

Nunes said the documents involved “legally collected foreign intelligence under FISA,” the Foreign Intelligence Surveillance Act, and they confirmed U.S. persons were incidentally collected during surveillance. This information would have been classified, by the very nature of its contents—and would have needed to be reviewed in a special location.

“If we’re assuming in good faith that the chairman of the intelligence committee made sure to conduct himself within the bounds of the law, then any classified material reviewed by him would have needed to be reviewed in a secure facility,” explained Bradley Moss, a lawyer specializing in national security clearances. “There are a very small number of them in the general area of the District of Columbia. And there are log entries to enter any SCIF [Sensitive Compartmented Information Facility]. Assuming that whoever gave it to him was authorized to have that information, he would have had to have visited a SCIF.”

Democrats on the House Intelligence Committee have suggested that Nunes’ source was the White House, looking to distract from FBI Director James Comey’s revelation Monday that the bureau is investigating whether members of Trump’s campaign colluded with Russia.

“Where did [Nunes] receive this information? From our knowledge, no one on his staff and no other members were a part of this,” Rep. Eric Swalwell said on MSNBC on Thursday. “So that means it had to be outside of the Capitol. So, did he go to another agency? And does that mean that the White House was a part of this? It sure seems like the White House after what came out on Monday was scrambling to do anything it could to put another smoke bomb into this investigation.”

Even before this controversy, Nunes’ independence had been questioned. Nunes had been a member of the president’s transition team, and his office had previously acknowledged that he had, at the request of the White House, spoken to a reporter to challenge reports of links between Trump associates and Russia.

The White House denied any knowledge of Nunes’ source.

“We don’t talk about sources at this committee. We want more people to come forward,” Nunes added Friday.

The president did, however, promise evidence supporting his wiretap claim would be given to the House or Senate intelligence committee. Trump told Fox News that he would “be submitting things before the committee very soon.”

“We will be submitting certain things, and I will be, perhaps, speaking about this next week,” Trump said last week. This has not yet occurred, as far as the public knows.

On Friday, Nunes also announced that the committee controlled by Republicans had indefinitely postponed a scheduled open hearing Tuesday with former national security officials, replacing it with a closed hearing with the heads of the FBI and NSA.

“For House Republicans and the White House, this is about obstruction and distraction,” Rep. Mike Quigley told The Daily Beast. “And this week there were three: that Obama wiretapped Trump tower, number two, this middle of the night excursion, and number three, canceling the open hearings. I just tell my colleagues that we have to keep up the pressure so they don’t turn the lights out.”

Daily Beast: Devin Nunes Vanished the Night Before He Made Trump Surveillance Claims added by Peter Lance on March 25, 2017
View all posts by Peter Lance →