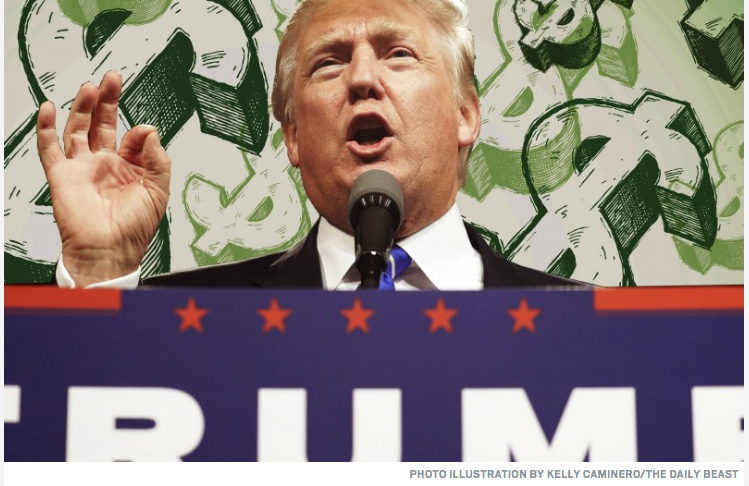 The big New York Times scoop that Donald Trump used $916 million of tax losses to enjoy many income tax-free years raised a question the newspaper didn’t try to answer: How did Trump do it?

Trump, the only major-party presidential nominee in four decades to keep all his tax returns secret, insists “there’s nothing to learn from them.”

Yet in one day I figured out how Trump’s advisers almost certainly arranged the massive tax losses, skipped out on a massive income-tax bill, and then fashioned a loophole with more valuable tax benefits than the already liberal tax breaks Congress gives big real-estate owners while sticking others with the bill.

Trump dumped the real costs of all this on investors who saw gold in his brand name, but who lost everything even as he was paid tens of millions of tax-free dollars.

All this came from subtle clues on the front pages of Trump’s 1995 Connecticut, New Jersey, and New York state income-tax returns. Which sums were on which lines in each state pointed to how Trump must have organized his affairs. Two of the most respected tax professors in America agree with my analysis. Edward Kleinbard of the University of Southern California and Martin J. McMahon Jr. of the University of Florida refined my view.

Trump’s gambit is easy to explain in plain English, but for tax wonks the short version is this: Trump combined tax benefits under Section 1231 of the Internal Revenue Code with the exception provisions in Section 108.

The story of Trump’s income tax-free life begins in 1990 with Trump’s well-documented mismanagement of his casinos and his admission that he paid far too much for “trophy properties” like the Plaza Hotel in Manhattan and 23 worn-out jetliners for the short-lived Trump Shuttle airline.

These mistakes created about $1 billion of “net operating losses,” or NOLs, under Section 1231 of the tax code.

NOLs are incredibly valuable. These tax losses can be used to offset salaries, business profits, and income from, say, a television show or making neckties in China. Thanks to his $916 million of NOLs, Trump could earn much over 18 years in salaries, profits, and interest, but pay no income taxes.

Net operating losses should reflect economic damage suffered by the owner of the NOLs. But Trump found a way to gain from these losses by spreading the costs around to bankers and investors.

NOLs can be used right away or be applied to reduce taxes from two previous years and up to 15 future years. In contrast, Congress requires that real estate be depreciated for tax purposes over 39 years. The faster a tax break becomes available, the greater its value. Trump’s advisers found a way to convert real-estate depreciation into NOLs that were much more flexible and could be used faster.

Trump claimed to be worth billions in 1990, just as he does now, yet he could not pay his bills. He stiffed hundreds of small-business suppliers, including those for the Trump Taj Mahal casino in Atlantic City, which will go out of business next week. In all he owed more $3 billion, nearly a third of his debt secured by nothing more substantial than his signature on bank loan papers.

Last May, Trump revealed that he took on debt with no intention of paying it all back, which strikes me as fraud. “I’ve borrowed knowing you can pay back with discounts,” he told CNBC in May, boasting “I’ve done well with debt.”

Back then Trump threatened endless litigation unless 70 banks he owed money gave him millions more in new loans at low interest rates and provided him with $5.4 million a year for personal spending, the equivalent of $10 million in today’s money.

Back then, one billionaire told The New York Times he didn’t know how to spend that much on himself and his family.

What made the litigation threat credible was Trump’s refusal to pay more than 150 illegal immigrants who demolished the Bonwit Teller department store to make way for Trump Tower. A federal judge ruled that Trump conspired to cheat the workers, who never did collect all of their $4-an-hour wages despite an 18-year struggle.

The bankers realized that a man who would endure almost two decades of litigation to avoid paying such meager wages might tie them up for eternity over the billions of dollars owed to them.

When the New Jersey Casino Control Commission took Trump’s side against his bankers, they gave in. The banks canceled close to a billion dollars of Trump’s debts and extended new loans on favorable terms.

Normally, any part of a loan that is forgiven becomes taxable income, as millions of people who could not repay home mortgages or student loan debt have learned in recent years.

That’s where Section 108 comes in. Three years after Trump bested his bankers, Congress amended that section to let real-estate professionals avoid income taxes on debts that were canceled.

The technique is simple. The taxes due immediately because a debt is forgiven can be exchanged for relinquishing future real-estate tax deductions. Trump agreed to forgo his future right to take about $1 billion worth of depreciation on his casino hotels.

This exchange created a future problem for Trump. Real estate that cannot be depreciated is worth a lot less. Indeed, generous tax benefits drive real-estate investment. So while Trump escaped an immediate income-tax bill, the future tax benefits he gave up would mean that he would likely have to pay income taxes on his salary, fees for licensing his name, and other income.

To solve this problem, Trump sold stock for the first time in 1995. He founded Trump Hotels and Casino Resorts, which then took ownership of his casino hotels.

That meant Trump got money for selling his casino hotels, while the investors got real estate with greatly diminished tax benefits.

Trump Hotels and Casino Resorts was a complete disaster. It lost money every year. During Trump’s 13 years as chairman, the company lost $1.1 billion. Trump stock fell from a high of $35 to just 17 cents, wiping out investors.

Trump did just fine, though. He was paid $82 million, Fortune magazine estimated. The publicly traded company even took out loans that were used to pay off some of Trump’s remaining obligations to the banks from when he owned his casinos outright.

The $82 million Trump was paid by the publicly traded company bearing his name should have all been received income tax-free thanks to those NOLs. Thus his mismanagement, and the tax benefits he stripped out of the casino hotels before he sold them to shareholders, made him richer and them poorer.

So while Trump made money at every turn, the banks that lent him money, the workers and small businesses who delivered for Trump, and the investors in his casino company all got stiffed. And while they paid taxes on whatever income they did manage to collect, Trump enjoyed at least $916 million of tax-free income.

In the first debate with Hillary Clinton, Trump did not dispute her statement that he pays no income taxes. Instead he said it shows he is smart.

That may be, but it also suggests the rest of us are chumps for paying our taxes while Trump enjoys all the benefits of the United States government—little things like individual liberty, the FBI, and a military to protect us—while bearing none of the burden. If we all did as Trump does, we would, to quote a line Trump employs often, not have our country anymore.

Just three pages of tax forms, years of assiduously following Trump, and a deep knowledge of tax law allowed me to determine how he almost certainly arranged to escape income taxes for years while he stuck others with the bill. Now imagine what voters could learn if I had just one complete Trump tax return or years of his Form 1040s and Schedules A through E. It would be possible then to evaluate his unverifiable claims that he is a modern Midas worth more than $10 billion.

A complete tax return for 1995 would also make it possible to determine if Trump followed the law, as a statement he issued asserts, or misreported figures to inflate his tax savings.

Trump has been found more than once to have used two sets of figures to short others and benefit himself.

Keep in mind that we know Trump engaged in sales tax fraud, as I detail in my book The Making of Donald Trump.

Earlier this year I revealed badges of fraud on Trump’s 1984 income-tax returns.

Under oath, his own tax lawyer and accountant disowned the return.

Then there’s Trump’s role in authorizing an alleged quarter-billion-dollar income-tax fraud on profits from the Trump SoHo in Manhattan. The profits were run through a corrupt Icelandic bank under the control of one of the many Russian oligarchs whom Trump has said have paid him tens of millions of dollars and are among his best customers.

Trump’s full tax returns would help us understand how deeply he is involved with the oligarchs, whose fortunes and even lives depend on maintaining friendship with Vladimir Putin, the murderous Russian autocrat whom Trump goes out of his way to praise at every opportunity. Trump’s full tax returns would also tell us about his debts to the Bank of China, owned by the communist rulers in Beijing, and his many deals with Middle East potentates and their retainers.

Knowing how much leverage these foreign power brokers have on Trump is highly relevant since he wants to become commander in chief and possess the powers of federal law enforcement.

What I distilled from just three pages of Trump tax documents—together with other reporting—provides Congress with ample reasons to investigate Trump’s finances, especially the way the tax code can be abused to cheat others and enjoy tax-free living.

Trump, who demands that Congress press investigations into his opponent over personal emails, surely could have no complaint about the use of federal tax dollars to investigate his finances. After all, while a federal investigation into Trump’s conduct will cost us some of our income-tax dollars, it wouldn’t cost Trump a penny.