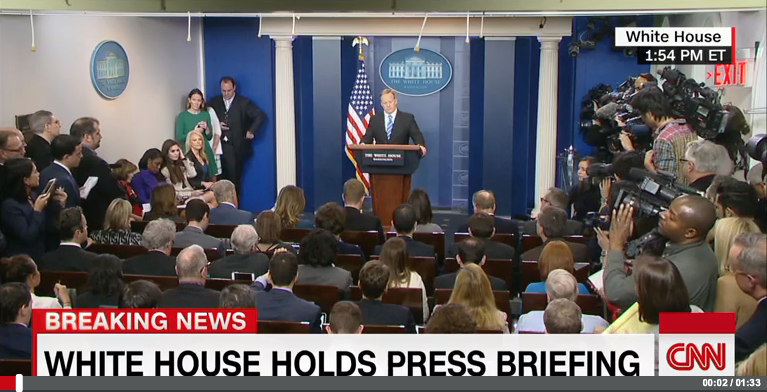 Washington (CNN)President Donald Trump believes millions of votes were cast illegally in last year’s election, White House press secretary Sean Spicer said on Tuesday, but he wouldn’t provide any concrete evidence for the claim, which has long been debunked.

“The President does believe that, I think he’s stated that before, and stated his concern of voter fraud and people voting illegally during the campaign and continues to maintain that belief based on studies and evidence people have brought to him,” Spicer said.

Pressed for what evidence exists, Spicer would say only that Trump “has believed that for a while based on studies and information he has.”

When pushed about whether Trump will call for an investigation into the voter fraud, Spicer said, “maybe we will.”

Trump surprised the top Republicans and Democrats in Congress on Monday when, during a dinner at the White House, he repeated his claim that millions of undocumented immigrants voted for Hillary Clinton — allegedly depriving him of the popular vote, according to two sources familiar with the meeting.

A number of studies have found no evidence of widespread voter fraud.

The Truth About Voter Fraud, a report written by experts at The Brennan Center for Justice, found voter fraud rates were between 0.00004% and 0.0009%.

“Given this tiny incident rate for voter impersonation fraud, it is more likely, the report noted, that an American will be struck by lightning than that he will impersonate another voter at the polls,” reads the report.

“I wasn’t there, but if the President of the United States is claiming that 3.5 million people voted illegally, that shakes confidence in our democracy — he needs to disclose why he believes that,” Graham told CNN. 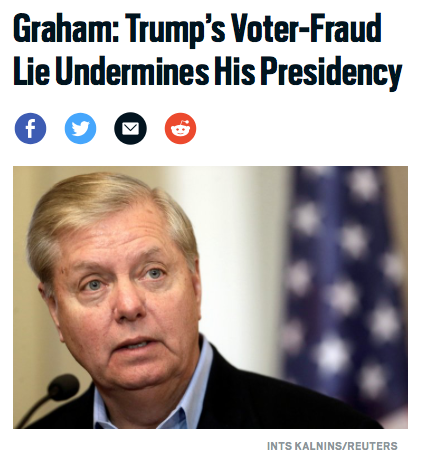 A Daily Beast story quoted other comments Sen. Graham made to CNN:

South Carolina Sen. Lindsey Graham on Tuesday said Donald Trump is undermining his presidency when he continues to repeat the lie that millions of people voted illegally in the 2016 presidential election, costing him the popular vote.

“It is the most inappropriate thing for the president to say without proof,” Graham told CNN in an interview on Capitol Hill. “We’re talking about a man who won the election and seems to be obsessed with the idea that he could not have possibly lost the popular vote without cheating and fraud. So I would urge the president to knock this off.”

Trump, who lost the popular vote to Hillary Clinton by nearly three million votes, reportedly repeated the unsubstantiated claim during a meeting with lawmakers on Monday night.

“People are going to start doubting you as a person if you keep making accusations against our electoral system without justification,” Graham continued. “This is going to erode his ability to govern this country if he does not stop it.”

CNN: Spicer Doubles Down on Trump Voter Fraud Lie. Graham calls him “obsessed.” Allegation will “erode his ability to govern.” added by Peter Lance on January 24, 2017
View all posts by Peter Lance →