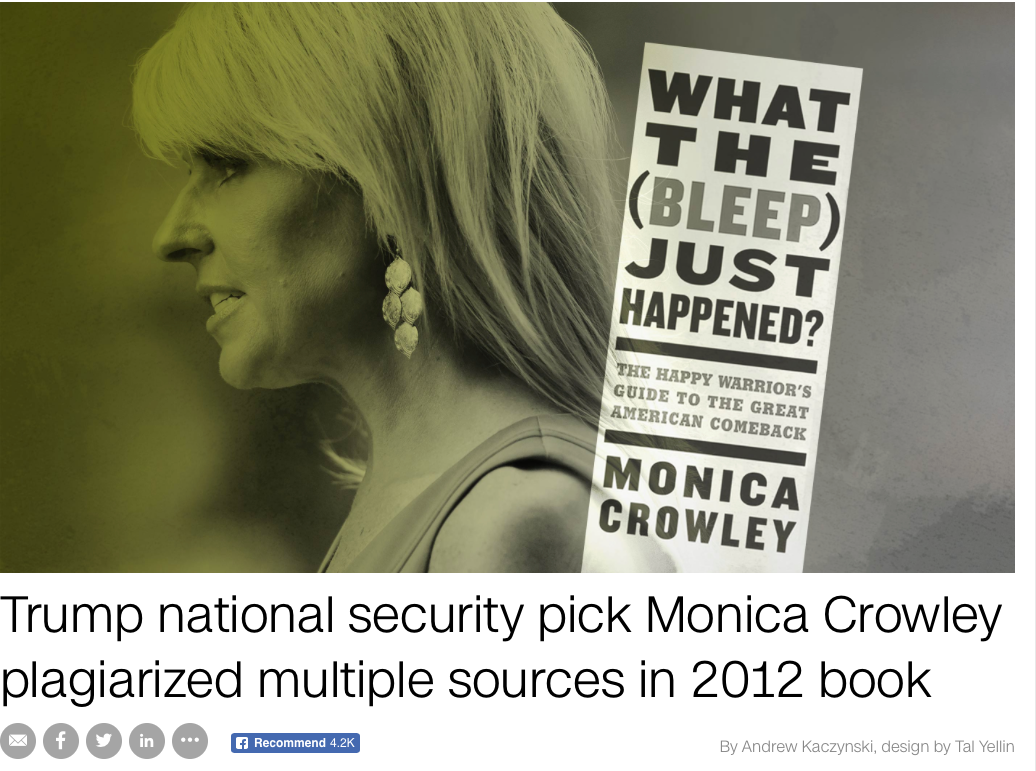 The review of Crowley’s June 2012 book, “What The (Bleep) Just Happened,” found upwards of 50 examples of plagiarism from numerous sources, including the copying with minor changes of news articles, other columnists, think tanks, and Wikipedia. The New York Times bestseller, published by the HarperCollins imprint Broadside Books, contains no notes or bibliography.

Crowley did not return a request for comment. Multiple requests for comment by phone and email over the past two days to HarperCollins went unreturned.

Crowley, a syndicated radio host, columnist, and, until recently, a Fox News contributor, will serve as Trump’s senior director of strategic communications for the National Security Council.

“Monica’s exceptional insight and thoughtful work on how to turn this country around is exactly why she will be serving in the Administration,” a statement from a transition spokesperson said. “HarperCollins—one of the largest and most respected publishers in the world—published her book which has become a national best-seller. Any attempt to discredit Monica is nothing more than a politically motivated attack that seeks to distract from the real issues facing this country.”

In the book, Crowley lifted an entire section on Keynesian economics from the IAC-owned website Investopedia.

In one instance, Crowley lists a variety of so-called “pork” items she claimed were part of the 2009 stimulus package. Many of the instances were copied wholesale from a conservative list of pork barrel spending, with some items dating back to the 1990s. Most of the copied instances were listed on a website for a podiatrist dating back to 2004.

A section on organized labor appears largely copied from a 2004 article by the libertarian think tank the Mises Institute. Another portion of her book on torture is copied from a Fox News article.

Sections of her book are repeatedly lifted from articles by National Review author Andrew C. McCarthy, who is a friend of Crowley’s. Lines in her book also match word-for-word the work of other columnists, including National Review’s Rich Lowry, Michelle Malkin, conservative economist Stephen Moore, Karl Rove, and Ramesh Ponnuru of Bloomberg View.

Crowley has been accused of plagiarism before. In 1999, Slate reported a column by Crowley in the Wall Street Journal mirrored a 1988 article in Commentary, the neoconservative magazine.

“Had we known of the parallels, we would not have published the article,” a Journal editor’s note said at the time. Crowley denied the charge at the time, saying, “I did not, nor would I ever, use material from a source without citing it.”