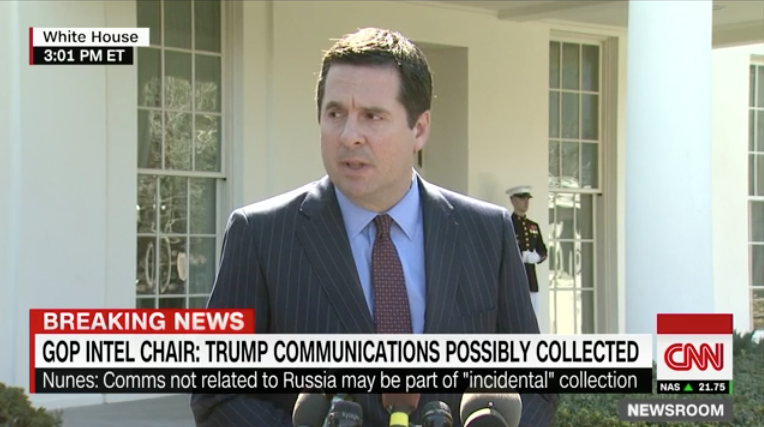 Nunes said at a news conference he discovered the potential surveillance of Trump himself while reviewing intelligence reports, but said it was not related to Russia.

“This is a normal, incidental collection, based on what I could collect,” Nunes said. “This appears to be all legally collected foreign intelligence under” the Foreign Intelligence Surveillance Act.

Nunes said he alerted House Speaker Paul Ryan about the collection and is traveling to the White House Wednesday afternoon.

Asked whether he felt vindicated by Nunes’ comments, Trump told reporters in a brief exchange he felt “somewhat” vindicated.

Democrats on the committee appeared blindsided by Nunes’ announcement. Rep. Jim Himes said he spoke with ranking Democratic member Adam Schiff, and that neither of them are familiar with the evidence Nunes is citing.

Nunes is chairing the House Intelligence Committee’s investigation into Russian meddling into the US election last year. Two weeks ago, Trump asked Congress to investigate whether Trump Tower was wiretapped by his predecessor, then-President Barack Obama.

On Monday, Nunes’ committee held a hearing featuring FBI Director James Comey and National Security Agency Director Mike Rogers. At that hearing, Comey confirmed for the first time that his agency is investigating possible collusion between Russia and the Trump campaign and whether any crimes may have been committed during last year’s election campaign as part of a wider probe into the hacking of Democratic servers and the Clinton campaign.

Also at that hearing, Comey said he had seen no evidence so far of the specific allegation of wiretapping Trump Tower.

Nunes did not know whether the “incidental collection” happened at Trump Tower, and could not say for certain whether Trump’s communications were directly collected.

Nunes said the collection included Trump transition officials and that it happened after the election. He said he could not say whether it meant that Trump was “spied on.”

“I’m not going to get into legal definitions, but clearly I have a concern,” he said.

CNN: House Intel chairman: Trump’s personal communications may have been collected added by Peter Lance on March 22, 2017
View all posts by Peter Lance →