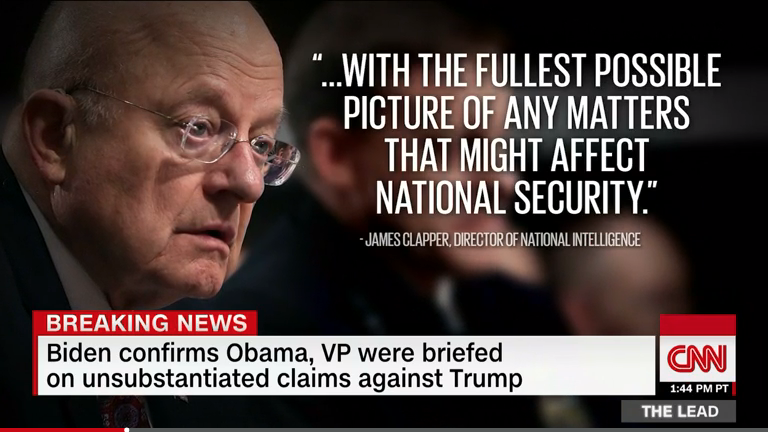 (CNN)Vice President Joe Biden confirmed Thursday that he and President Barack Obama were briefed last week by intelligence officials on unsubstantiated claims that Russia may have compromising information on President-elect Donald Trump.

CNN first reported that the nation’s top intelligence chiefs provided both the President and President-elect a two-page written synopsis of the claims, which came from a 35-page report compiled by a former British intelligence operative based on Russian sources. Intelligence agencies appended a two-page summary of the unverified allegations to documents prepared for the briefing on Russian meddling in the 2016 US presidential election.

Biden’s office confirmed that the vice president said he and Obama were briefed about the claims but said that neither Biden nor Obama asked for more information about them. Biden’s office also said the vice president told reporters that intelligence leaders felt obligated to tell Obama because they were planning on informing Trump. Biden also said he read the entire 35-page report.

The comments by Biden are the first by any top government official confirming that they were told about the allegations as part of their intelligence briefing.

Also on Thursday, the two-page synopsis was discussed in a closed-session Senate intelligence briefing, multiple senators told CNN. Intelligence officials said the material was not a product of the intelligence community, an apparent reference to the unverified allegations against Trump.

On Wednesday night, Director of National Intelligence James Clapper called Trump to try to defuse tensions after the President-elect accused the intelligence agencies of leaking information about the dossier.

Clapper issued a rare public statement after his call with the President-elect, expressing “dismay” at the leaks and making it clear he did not believe the intelligence community had anything to do with what he called the “private security company document” that contained claims about Trump.

He added that the intelligence community “has not made any judgment that the information in this document is reliable, and we did not rely upon it in any way for our conclusions. However, part of our obligation is to ensure that policymakers are provided with the fullest possible picture of any matters that might affect national security.”